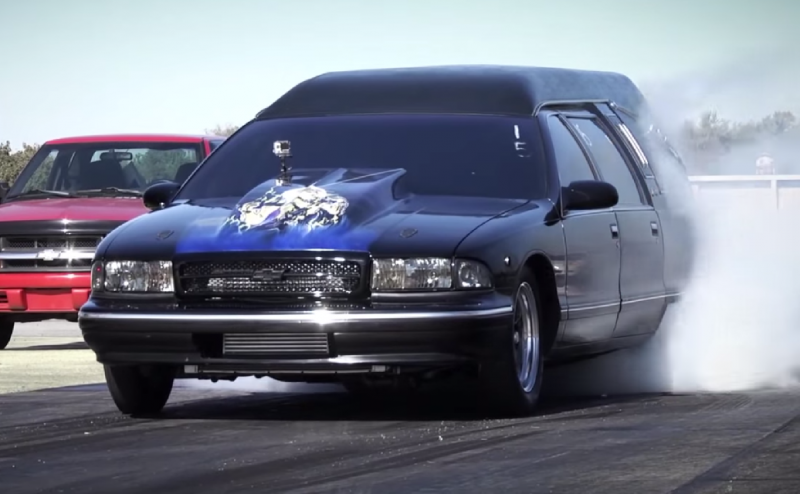 It isn’t too often that you see a car boasting 1,300 horsepower. It’s even less often that you hear of a specialty car achieving this feat. However, when the Vice President of AMS Performance, Arne Toman, heard that the Guinness Book of World Records for the world’s fastest Hearse sported a quarter mile of only a pathetic 13.72 seconds, he decided it was time to act.

According to Toman, modifying the same old performance cars in the same old way just wasn’t cutting it anymore,

“I always dream of strange auto projects. Builds that are different and completely unique. You would think being Vice President of AMS Performance, I would drive a Nissan GT-R since that is what we are most known for. Instead, I wanted something different. Off the wall. Something that leaves an impression no matter what.”

The team at AMS began with a 1996 Chevrolet Caprice that had been sold with the intention of ferrying the deceased to their final resting place. AMS removed the stock engine and replaced it with a Chevy LQ4 6.0 liter V8 engine. Adding a turbocharger with 23 psi of boost, the new engine also employs an upgraded valve-train and and cams, in addition to the visible front-mounted inter-cooler. With the engine coupled to a performance rear differential and a new transmission, the  hearse can now dart from zero to sixty miles per hour in an astounding 2.3 seconds. It performs a standing quarter mile in 9.94 seconds at 137 miles per hour. A final output of 1,300 horsepower has been achieved, so we can only hope that Toman and his pals at AMS are satisfied.

Of course, the folks at AMS didn’t want to build “some gutted out race Hearse.” The vehicle still has the functionality to mount a casket in the rear of the car. It also retains the functionality of all interior amenities, including the stereo and the air conditioning.