With the announcement of its 1953 models, Cadillac Motor Division continued to lead the American automobile industry in engine power, since its 1953 V8s developed 210 hp.

“The year 1953 marks the beginning of Cadillac’s second half-century of progress in the automotive world,” said an ad. “There’s no denying that it’s a wonderful start! . . . You’ll know what we mean the instant you enter our showroom . . . for the new ‘53 Cadillacs on display, represent one of the greatest strides forward in Cadillac history… Numerous changes in styling have made them unbelievably beautiful . . . and gorgeous new interiors, together with a wonderful new Cadillac air conditioner, offer unprecedented luxury and comfort.” 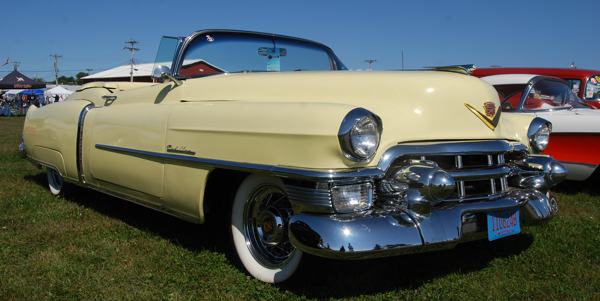 Actually, most people would consider styling changes made in most 1953 Cadillacs to be quite modest. The front grille was redesigned and had a heavier integral bumper and bumper guards. These new “Dagmars” were gigantic. And smaller versions protected the rear bumper. The parking lights were mounted directly under the headlights, in ribbed panels that matched the wraparound grille extensions. New wheel covers had a fuller outer edge and a dished center with the Cadillac medallion. Division bars were no longer seen on rear windows.

The limited-edition Eldorado convertible, like our featured car, had additional styling updates including a lowered wraparound windshield, cut-down door sills and a flush-fitting tonneau cover that entirely hid the lowered convertible top. Laced wire wheels were standard Eldorado equipment along with just about every option you could fit on one car, except air conditioning. No wonder it cost $7,750 and only 532 were built.

Like Chevy’s Corvette, the Eldorado was a dream car brought to life. As such, it was not intended as a volume-production model, but rather as a publicity-getter that would pull the curious into Cadillac showrooms where salesmen could pounce on them and sell them a more practical Cadillac. It was the “Let’s-go-see-the-dream-car-down-the-street” approach to automotive marketing.

There was no special Eldorado V8 in 1953. The enriched ragtop used the same improved 331-cid V8 other Cadillacs relied on. It did have a new 8.25:1 compression ratio that helped it crank up 210 hp at 4150 rpm. The four-barrel carburetor was a Carter WFCB or a Rochester 4GC model. Again-improved dual-range Hydra-Matic Drive was standard in upper level Cadillacs like the Eldorado. It was smoother, quieter and more efficient than the ‘52 version. 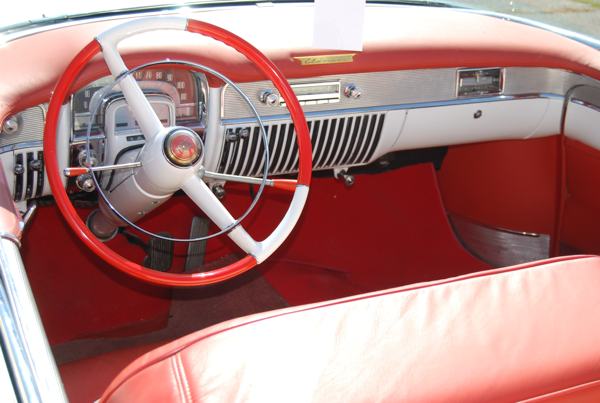 On April 16, 1953, Cadillac announced that Hydra-Matic Drive would be standard equipment. After the Hydra-Matic transmission plant in Livonia, Michigan burned down on August 12, 1953, Cadillac stopped building cars and laid off about 80 percent of its workforce for three weeks. On September 8, all 10,000 Cadillac assembly line employees went back to work, building Cadillacs with Buick Dynaflow transmissions. Production of these cars amounted to 19,000 vehicles. Cadillac produced its 100,000th car of the year on December 1, 1953.

The Eldorado was added to the line as a sub-series of the four-car Series 62. Having an Eldorado in the showroom did help Cadillac dealers sell other models, especially in the case of the Series 62 convertible, which went to 8,367 buyers. Tinsel-wise, the 62 ragtop had a narrow body bumper strip on the front fender and door and the V-with-Cadillac-crest trunk lid treatment. 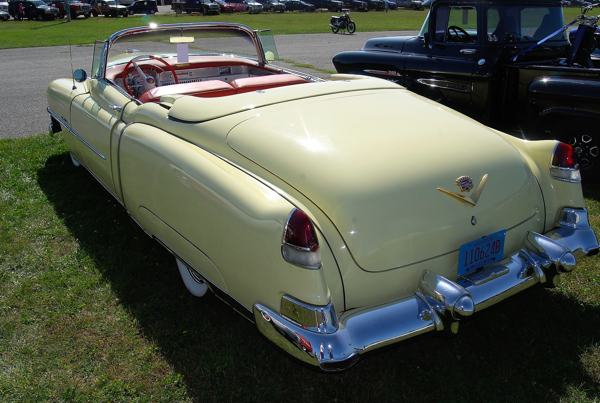 Cadillac introduced two dream cars at the General Motors Motorama on January 16, 1953. The first, called the Orléans previewed many 1954-1956 Cadillac styling features, such as the Panoramic windshield and four-door hardtop styling. The rear doors were hinged at the rear, like those of the 1957-1958 Eldorado Brougham. The Orléans looked like a closed-bodied Eldorado.

The other Motorama car was the Le Mans, a precursor of the ‘57-‘58 Eldorado. This fiberglass-bodied two-seat convertible had ‘54 Cadillac-style fenders, a low Panaromic windshield, open wheel housings and “turbine-fin” wheels. The Le Mans was 5-1/2 inches lower than a regular convertible. It came with a rain switch and a grid of electrodes that detected rain. As the water shorted the electrodes, current was transmitted to a motor that automatically raised the top. Cadillac built three slightly different Le Mans two-seaters.

On December 10, 1953, Cadillac changed over to production of 1954 models, but 1953 closed on a high note, despite Korean War production controls—plus the fact that only 4,812 cars were built during August, due to the transmission factory fire. Calendar-year production of 103,538 cars (102,500 with automatic transmission) did not fill all customer orders and Cadillac ended the year with a backlog. Model-year production had been the highest since 1951.