Lawrence Carrell is a big Ford guy. He has 15 Mustangs at home, but his newest addition to the garage is this 1954 Ford F-100. Lawrence, who goes by Larry, bought the Ford in Colorado more than 30 years ago, and this is the first time it has been fully completed. Over the years, Larry, along with his son, played around with making the F-100 a custom build, but hadn’t gotten it to this condition until now, showing it off in Las Vegas at the 2014 SEMA show.

“It started out as a father-son project to teach him about cars,” Carrell says. “When my son left home for school I let the truck sit. I had work and travel, so I wasn’t able to do much. Then in 2004 I moved from Colorado up to Wyoming and I spotted an ad in the newspaper for a 2002 Ford Lightning 5.4L Supercharged Engine and a transmission, so I ended up buying that.” 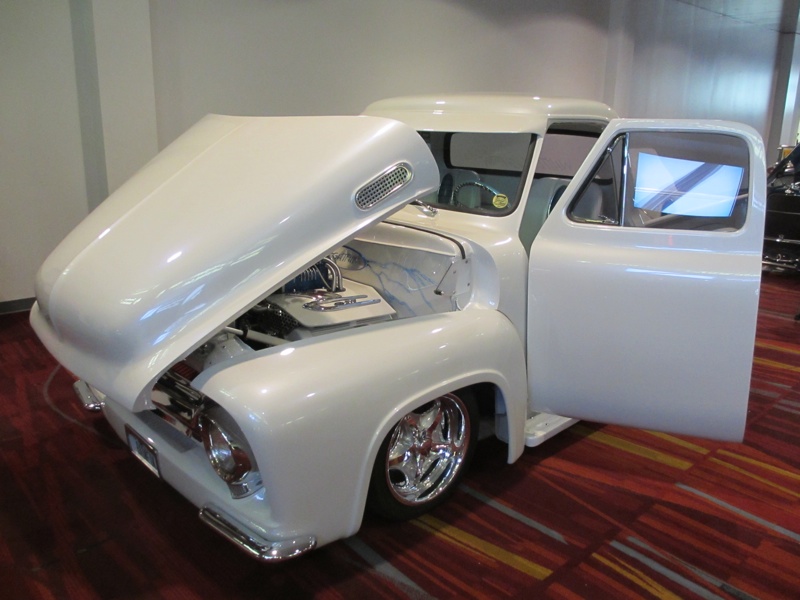 The 5.4L factory supercharged engine was put under the hood and a 4R100 transmission with a 9″ Currie 3.73:1 ratio differential was also added, giving the build new life. The car started out as a driver and then Larry made the decision to build it to a show vehicle class. “We had some rough edges and had to work backwards to take care of those,” he says. “It didn’t start out with the idea that we would show it someplace like SEMA, but here it is.” 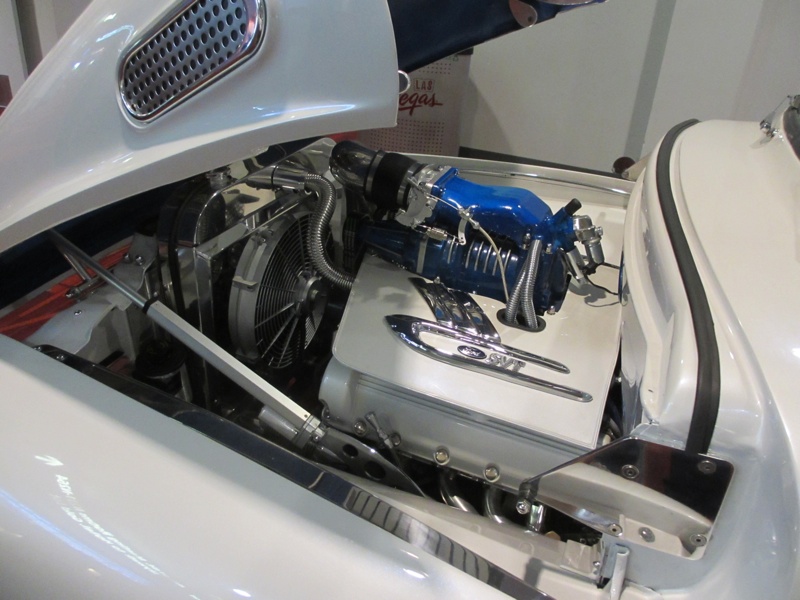 The car’s construction is courtesy of Walton Fabrication out of Upland, CA. Walton helped build the frame, chassis, fuel system and exhaust. Other custom body mods and fabrication came from Rocky Mountain Custom in Conrad, MT, and custom paint-work was done by T&K Auto Body LLC, also in Conrad. The Ford’s interior was done by Deluxe Automotive Interior Stylists in Rosamond, CA. 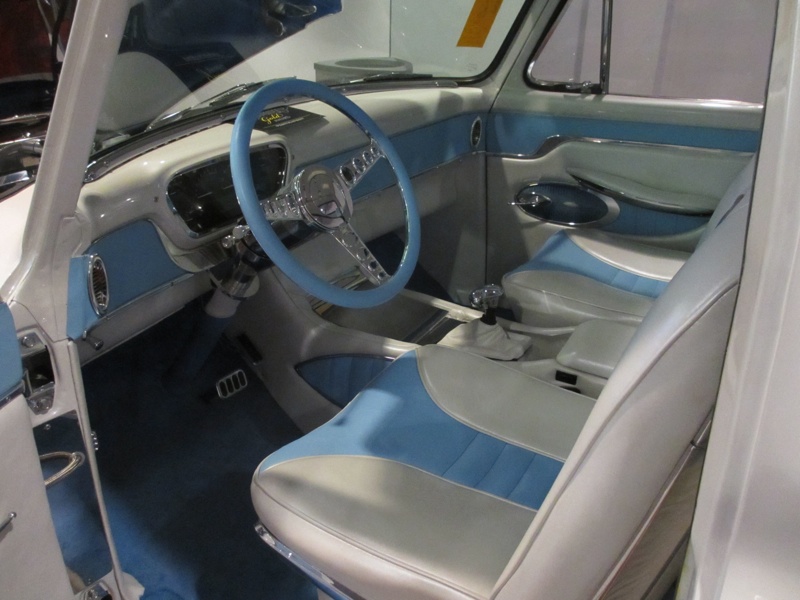 The truck is unique in the sense that it has a different slant on the interior. It’s more of a ’50s type of look. The taillights are off of a Polaris ATV, but they are integrated taillight/brakelight/backup light. The metal work is all stainless. “We tried to make the truck so that it didn’t look like every other custom build out there,” Carrell says.

The door handles were shaved and now have electronic entry. The blue electrical panels on the inside of the doors are stingray hides that are dyed blue. On the floor instead of carpeting there is dyed blue heron cow hide. 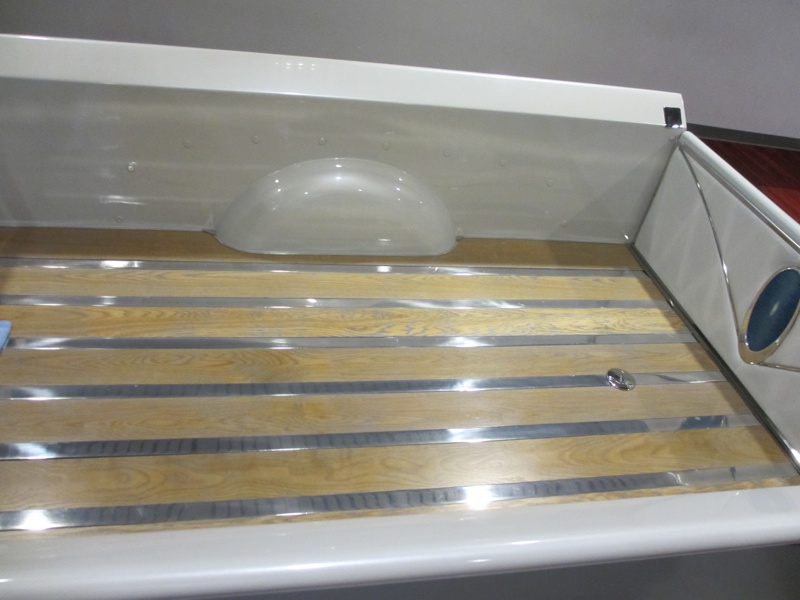 The wood in the deck is raw white pine and we planed it with our own tools and layered a coat of blue paint on it and let it set for a while and then shaved it off so that the soft part where the blue paint soaked into the wood was still there, but the hard part was shaved off to get back to the wood grain. then we covered that with a clear coat and a polyurethane on top of it.

The gas cap is placed in the bed. “It’s pretty inconvenient, but it looks cool.” 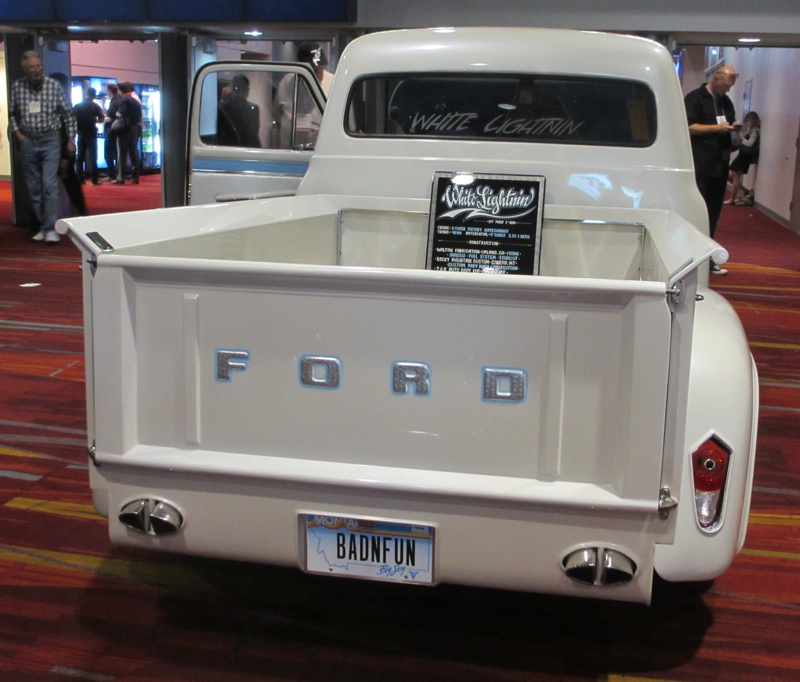 “Our big thing is just to get it out and have people look at it and see how they receive it,” he says. “I decided to get into custom vehicles because there aren’t any rules. In pure restoration every bolt has to be perfect and so on. With custom builds, everything has to be perfect, but you can be artistic.”

The paint job is a Lexus white pearl, but the second coat has some blue pearl introduced. When the light hits it right you can see blue sparkles. “It’s another big-boy toy and I think it’s pretty cool.” 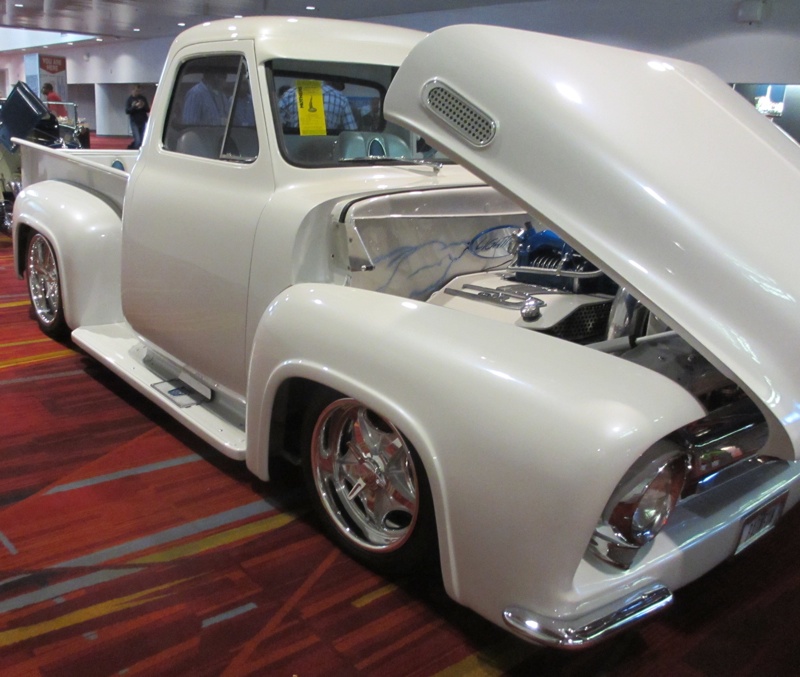