One of the coolest new concepts at the 107th Chicago Auto Show was Chrysler-Fiat’s “1957 Edition” of the Fiat 500 minicar. Retro-style cars have been a fad since Ford revived the two-seat Thunderbird, but all the Retro cars we’ve seen to date have been separate models with styling motifs lifted from the past. 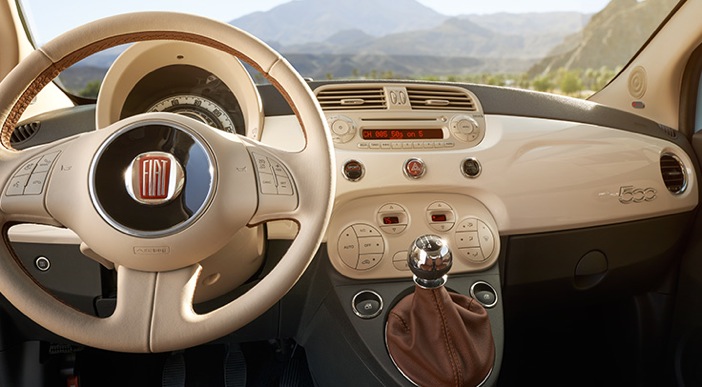 The Retro T-Bird was a unique design inspired by Ford’s original 1955-1957 sporty car. The New Beetle was a separate model inspired by the old Bug. The Plymouth (later Chrysler) Prowler was a limited-edition car themed after the American hot rod. The New Millennium Mini was a new car inspired by the 1960s model. The Chevy SSR was a fresh design paying homage to ‘50s Chevy trucks.

Chrysler’s 1957 Edition Fiat 500 is something else. At its core, the car is a standard Fiat 500. It is not a separate car design. The car’s throwback flavor comes from a number of custom options that link it to the Fiats made 58 years ago. These include brown leather seats with ivory stitching, exclusive body-colored 16-inch retro-style forged aluminum wheels, retro Fiat badging, a white painted roof and white mirror caps, a white leather steering wheel wrap with brown accents and a brown vinyl shift knob with white trim.

The car looks like one of those motor scooters that you see dolled up with whitewall tires and other trims that make them look old-fashioned, even though they are the same basic machine you can get in modern dress. The concept is similar, but it’s new to the automotive world and it may inspire some copycats. Imagine Chevy dressing up an SS with 1963 Impala motifs or imagine Ford putting the Fusion sedan out with a “1964 Galaxie Edition” package! So far, Chrysler seems to be the only automaker toying with this trick; it has created various limited edition Chargers and Challengers that give a nod to the past.

Still, the 1957 Edition Fiat 500 is different because its customization is based on a particular model year of the past. Company designers have done a great job of giving a modern automobile the character of a 1957 model. If it sells like we think it will, we predict that other carmakers-both domestic and foreign-will soon be jumping on the bandwagon.