At Mercury, 1957 was the year of “Dream-Car Design.” Highlights of the model year included a jazzy new Turnpike Cruiser series that supplied the year’s Indy 500 Official Pace Car.

While Mercury advertisements described Dream-Car Design as “a clean break with the plump, bulging lines of many of today’s cars” and “a sleek, clean-cut, dynamic look,” the overall appearance was not what we would think of as a “clean” car design today. It had plenty of the gold-finished and chrome-finished bright work that we love on the cars of this era, as well as a few styling gimmicks designed to make it stand out in the crowd. The basic lines were very straight and square, as well as following the longer, lower, wider theme that characterized almost all cars of this era. 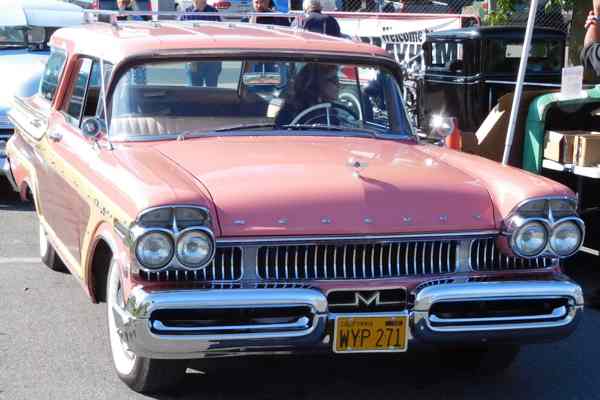 The front bumper jutted out and looked like the front of a jet with big air intakes on either side of center. The full-width grille, no longer integrated with the bumper, featured multiple concave vertical louvers. The hood was hinged at the front and lifted from the rear. The cowl had vent intakes. Dual headlights were standard on the Turnpike Cruisers and optional on other models. Concave guided-missile-shaped spears were seen on the rear fenders (and rear doors of four-door models). The sculptured rear deck had a depressed center section. The rear bumper resembled the front dummy jet-plane-like “exhaust pods.” Other decorative touches included unique V-shaped taillights and a chrome “M” placed between the grille and the bumper.

Trim wise, the station wagons roughly corresponded to each series. The Monterey-like Commuter wagon offered two- and four-door models with two seats and a four-door three-seat version as well. The Montclair-like Voyager wagons came in two-door six-passenger and four-door nine-passenger editions. The Colony Park (including the car pictured with this article) was Mercury’s wood-grained nine-passenger four-door wagon. Station wagon retails ranged from $2,657 to $3,377. The Convertible Cruiser listed for $3,773. 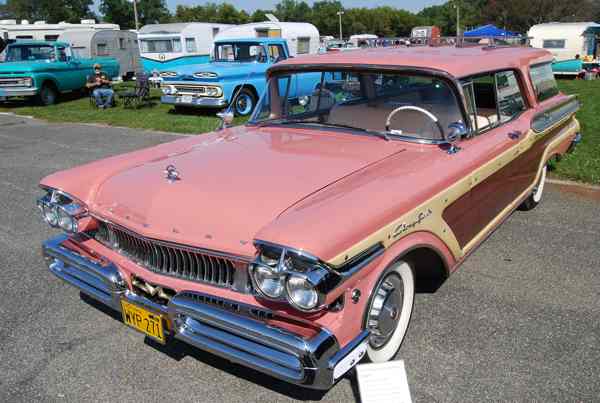 Cars in the bottom series had the Monterey name in script on their front fenders. The headlight “cylinders” on these cars were painted (often in a contrasting color on two-tone cars). The bright metal panels inside the rear bumper pods had a horizontally-textured finish. The body side molding was the same width from headlight to rear of the car. There was no package shelf ornament. Production in this series came to 157,498 cars and the rarest was the convertible, of which 5,003 were built.

Chrome headlight cylinders, nameplates on the upper front fenders, an ornament on the rear shelf of sedans and hardtops and a rectangular grid design in the rear bumper pods were some of the differences between Montclairs and Montereys. Convertibles in both series had a plexiglass wraparound rear window. The front section of the body side molding was wider than the section on the rear doors and fenders. Total production of the four Montclair models was 75,351, including just 4,248 ragtops.

The Turnpike Cruiser was one of the most gadget-laden cars ever built. Mercury said that it was based on the XM-Turnpike Cruiser, although the opposite was the case. All power items were standard. Other special features included an overhanging roof with a retractable rear window, streamlined air ducts mounted on top of the windshield (with fake aerials sticking out of them), a power seat with a memory dial, rubber instrument bezels, a special starter button, a clock and odometer, sliding door locks, a rear deck lid “hood ornament,” a special interior with a perforated vinyl headliner and a gold anodized insert in the upper rear fender concave section that led to the taillights. The Convertible Cruiser was, technically, in a separate series These collectible cars had a production run of 7,291 two-door hardtops, 8,305 four-door hardtops and only 1,265 convertibles. 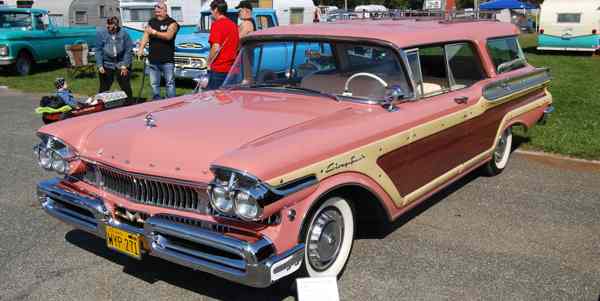 Station wagons were a separate series this year. The top-of-the-line model was the Colony Park, as seen here. It featured four-door hardtop styling and fake wood trim. The mid-priced wagon was the Voyager. It had a rear vent window like the Colony Park, but did not have wood trim. The lowest priced wagon, the Commuter, looked about the same as the Voyager but lacked a rear vent window. With six models to sell, Mercury still built only 35,792 station wagons. The rarest (2,283 made) was the two-door Voyager.

Base engine in the Monterey, Montclair and Voyage models was a single four-barrel-carburetor version of the 312-cid V-8 with a 9.7.0:1 compression ratio and 255 hp at 4600 rpm. This was promoted as the “Safety-Surge” V-8. The Turnpike Cruiser and Colony Park models came standard with a larger V-8 that was optional in other models. This was a bored and stroked version with 368 cubic inches. It had a 9.75:1 compression ratio and a Carter or Holley four-barrel carburetor. It put out 290 hp at 4600 rpm and 405 foot-pounds of torque at 2600 rpm. An M-335 power package with two four-barrel carburetors (368-cid/335-hp) was optional for Montereys.

The ’57 Mercurys had a 122-inch wheelbase and measured 211.1 inches end to end. Overall height was in the 56.5-inch range (it varied slightly by body style) and all models had a maximum width of 79.1 inches. The majority of Mercurys used 8.00 x 14 tires, but convertibles and station wagons came with wider 8.50 x 15s to support their heavier weights. On Turnpike Cruiser and Station Wagon models, a new feature was Air Cushion suspension. With this setup, air-filled cushions at vital chassis points absorbed road shock and provided smoother handling and a softer ride.

Model-year 1957 was not a great selling season for Mercury, although the calendar year saw an improvement. The model-year production total was 286,163 units (4.6 percent market share). For the calendar year, output peaked at 274,820 vehicles and market share crept up to 4.5 percent. With the exception of the Turnpike Cruiser, the 1957 Mercurys with two headlights had model names at the front of the front fenders, above the side trim. The models with four headlights had their model names on the front fenders behind the wheel wells and below the side trim. About one-third (32.6 percent) of 1957 Mercurys came with four headlights.