The evolution of the station wagon between the early 1900s and the ‘60s was a striking reflection of middle-class Americans’ urge to own fine vehicles and suburban homes. Early “depot hacks” were boxy utility vehicles, but by the late-‘30s the richly varnished woodie wagon was an icon of stately suburban living. Right after World War II, car buyers–especially young, middle-class married couples who were raising families and purchasing suburban homes–turned to the station wagon as an all-purpose vehicle that could serve their needs.

Production of station wagons rose rapidly from the early 1950s on, even doubling every three years up to 1957. The sale of these cars–by now made entirely of metal (but sometimes using simulated wood trim) was stimulated by Americans’ new suburban life-style. By the late-‘50s, the station wagon had evolved to a model selling nearly a million cars a year. 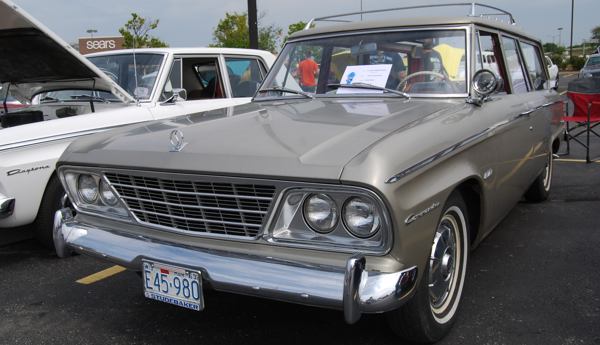 The Wagonaire introduced by Studebaker in 1963 was one of the most unique station wagons of the decade. This car was a part of the Lark Daytona model range. In 1964 and later, the Daytona name was used and Lark was dropped. Industrial designer Brooks Stevens, of Milwaukee, created the Wagonaire. These wagons had a 113-inch wheelbase and 187-inch length.

According to production totals compiled by General Motors marketing department, Studebaker made 8,762 Model P8 Lark Daytona wagons in 1963. Of these, 5,684 were six-cylinder cars, including 2,780 six-passenger versions. The other 3,076 were V8 powered, including just 616 nine-passenger jobs. Studebaker made 1,075 Lark Daytona station wagons in 1964. All were six-passenger V8s. In 1965, only 1,824 wagons were built. Production of all Studebakers ended in March 1966. Only 940 wagons were made the final year.

A unique feature of the Wagonaire was the manually-operated sliding roof. With the roof in the open position, ads suggested you could haul a refrigerator, a Christmas tree or a long package standing upright in the back of the vehicle. 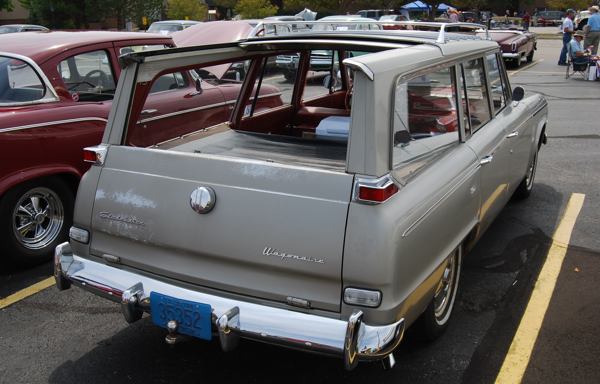 In ’63 and ‘64, the engines used were the 170-cid 112-hp overhead-valve six or the 259-cid 180-hp V8. After ’64, Wagonaires built at the Studebaker plant in Hamilton, Ontario, Canada came with V8s manufactured by the Canadian GM engine plant at McKinnon. These engines were also used in Canadian Pontiacs. They were similar to the venerable 283 found in American Chevys and had the same 9.25:1 compression cylinder heads used on ‘64 Corvettes. With a two-barrel carburetor, the “Studebaker” 283 produced 195 hp.

The car featured here is a 1964 Studebaker Commander Wagonaire station wagon owned by Claude Chmielewski. The photos were taken at the Studebaker Drivers Club’s (www.studebakerdriversclub.com) 2017 Upper Mississippi Valley Zone Meet in Milwaukee. Note the 1963 license plates. This car is a survivor with a few paint flaws, but is in very good condition. The rear view shows how the unique roof functioned.