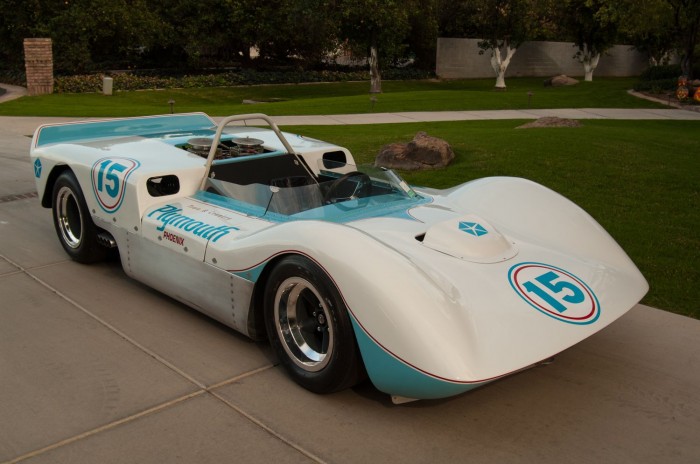 Following NASCAR’s ban on Chrysler’s new 426 Hemi engine for the 1965 racing season, fast-rising driver Richard Petty searched for other racing series to carry the Chrysler banner. Since Illinois’ Bob McKee had just begun construction of a series of mid-engine, tube-frame sports racers which could accept the new engine, Chrysler racing boss Ronnie Householder placed an order for a Chrysler-backed McKee Mk V for Petty to drive in the emerging Can-Am series.

Although, since the car would not be ready for the 1965 season’s start, Petty switched to drag racing and the Hemi-McKee was campaigned instead by popular Arizona Chrysler dealer and racer Bob Montana as the “Town & Country Plymouth Special” nationally from 1965 through 1967 in Can-Am and USRRC events alongside the McLarens, Lolas, Chaparrals, Ferraris, and Porsches of the era.

Montana pulled two late-season SCCA victories in 1965 and the car was eventually retired in 1969.

Following Montana’s unfortunate death in 1971, the McKee remained intact and was stored for the next three decades. It was restored to its former glory, complete with cross-ram Hemi power, and resurfaced at the Columbus, Ohio Mopar Nationals in 2004.

As the hot subject of many articles, the McKee remains simply one of the most fascinating pieces of Chrysler factory-backed racing history in private hands today. Never publicly available until now, it will provide the crowning jewel for committed “Hemi” collectors.

Set for January 15th to the 19th, the event will continue to provide an amazing selection of magnificent automobiles, gala lifestyle events, and of course, our electrifying high-octane auction experience.