If you’re on a mission to see some of the best custom vehicles in the world, you go to Las Vegas the first week of November to attend the Specialty Equipment Manufacturers Association Tradeshow, or SEMA for short.

In 2017, the SEMA Show attracted a staggering 165,000 registrants. Among them was Aaron Vaccar, owner of The Vaccar Company, and the designer/builder behind numerous custom vehicles such as this WD-40 Ford Bronco. 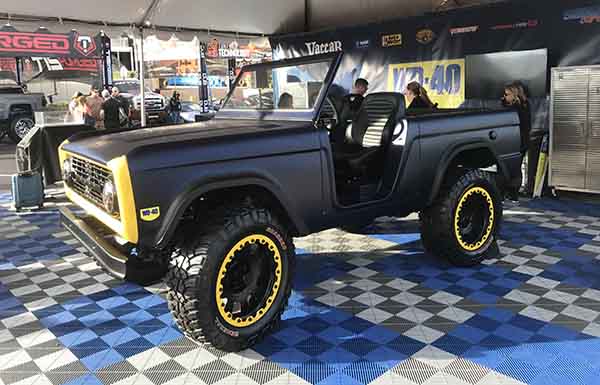 Aaron, along with his father, have been a team since founding The Vaccar Company roughly 10 years ago, specifically to build promotional vehicles. As things progressed over the years, The Vaccar Company has added to its space, which now sits at 8,000 square feet in a facility in Florida. The company also has some offices in Ohio.

“We build cars for anyone all over the country,” Aaron says. “But what we enjoy and what I think we’re known for is we handle a large amount of SEMA vehicles each year. So when the opportunity arose that WD-40 was seeking an off-road vehicle for display at the SEMA Show, that’s kind of when we got our gears turning trying to brainstorm how do we build something exciting and thrilling for them at the show.”

As these kinds of projects tend to go, Aaron and his team were on a time crunch to complete the car for SEMA. They had to start getting creative in a hurry.

“Our relationship with Ford always gets my thinking towards the blue oval brand, but at first we were thinking that WD-40 is an iconic brand,” Aaron says. “So what really resonates with that? The Bronco came to mind and that’s a cult classic vehicle. So that kind of got us going in that direction. And then the next step was the wow factor. To blend old with new we thought let’s throw in one of Ford Performance’s new crate motors from the EcoBoost line. So the V6 twin-turbo 3.5L is the motor that we selected to put in the Bronco. In addition to all the exciting customization, we think the engine is going to be one of the wow factors of the build.”

The car is a 1966 Ford Bronco, and as you can imagine, any time you’re using a Bronco or anything in that age group, there’s going to be work that needs to be done.

“Since we were working with the WD-40 brand we already had at our disposal an arsenal of lubricants, greasers, degreasers, and rust penetration,” he says. “This is a restoration build, and thankfully we found a pretty clean specimen where we’re not replacing a lot of body panels and we’re not replacing a lot of metal. We had to seek that out and we spent quite a bit of time just searching for the right platform.” 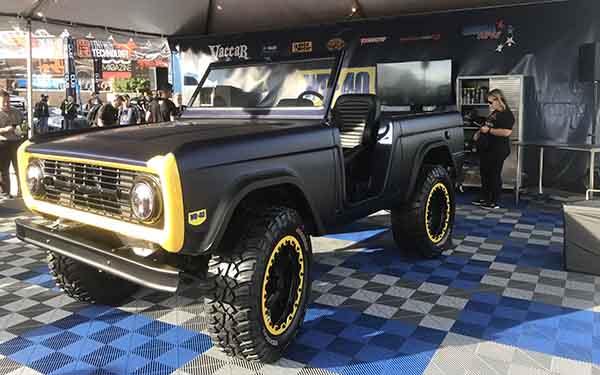 Aside from the time crunch Aaron’s team was under, the engine proved to be a unique challenge in the Bronco.

“I’ve seen a lot of Broncos with different engine swaps and I’ve heard of one shop that put an EcoBoost on a Bronco frame, but I’ve not personally seen one installed and running,” he says. “Just the fact that it’s already that rare, there’s no ‘go-to’ to check out how it fits or what you need. Thankfully, since it’s a crate motor and Ford has the control pack, that saves a lot of hassle with wiring. It’s more about fitment and the routing of intercooler pipes because this is a turbo motor. It’s not just the motor going in, you’ve got an intercooler and an additional two intakes for two different turbos and those turbos have to sit on each side of the motor and fit. It’s not that it can’t be done. We have a good team to be able to mount it the right way and have everything working. However, until you lower the motor down you really don’t know how it will fit. You can look at engine dimensions, and we did. You can measure your Bronco engine bay, which we did. But until that thing lowers in there you really don’t know.”

The 3.5L EcoBoost comes with 365 horsepower and a little over 400 lb.-ft. of torque. Vaccar added a mild round of upgrades to well round the build.

“The motor comes with an OEM air box,” he says. “We put on an aftermarket one. We also built our own custom exhaust for it and a couple of small things like an upgraded air cooler. The engine pack comes calibrated from the factory and it does have the ability to be recalibrated or retuned. With the larger exhaust and the larger intakes we’ll actually be able to retune it a little bit. I think a safe ballpark will be over the 400 horsepower mark because this motor is pretty accepting of the bolt-on upgrades.”

The body of the car is what made all the difference. Aaron was able to find a Bronco that only needed a new panel on one of the fenders. That’s not to say the grill didn’t need a little work or there wasn’t a little bit of work here and there, but often you’ll find Broncos just rusted through with holes or damage from over the years. This one the body itself was fantastic. The next step was seeing what the inside looked like.

“There were a couple of holes in the metal in the floor, not in places that worried us, but again some Broncos are a lot worse on the inside,” Vaccar says. “Ours just had a couple panels that we replaced on the floor. The nice thing about the Bronco is there’s not a whole lot of vehicle there in terms of the body itself. So to fix the floor and strengthen it and make sure it’s back up to par isn’t really anything too crazy.”

Inside, Aaron used aftermarket seats, a nice undercoating floor that is weather-resistant, an aftermarket steering wheel, and an assortment of aftermarket gauges.

“It’s got a resto mod appearance since we retained some of the key elements that help people remember the Bronco, but we intertwined some nice, modern customization,” he says.

The outside of the Bronco was left more or less original. It has a mild fender flare setup on it, but Aaron says he didn’t want to get too crazy because the Bronco is a great vehicle in general and it’s been rising in popularity, especially over the last couple of years. 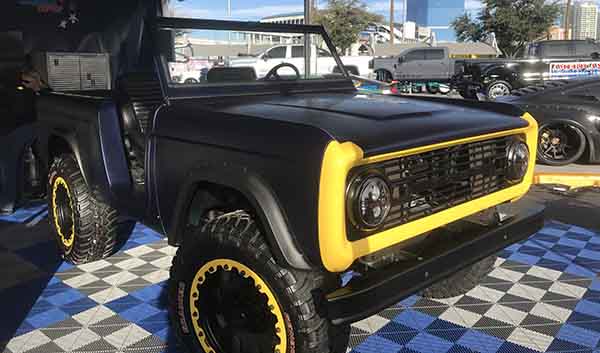 Another helpful factor in completing the car on time was that The Vaccar Company’s shop can do everything under one roof.

“Most recently, we’ve been able to add a paint booth to our shop and that was the one thing we never had,” Vaccar says. “Now that we’ve made that addition as well, the Bronco entered our shop and didn’t have to leave until it was done.”

In general, Aaron says the car came together fairly smooth with help from WD-40 and other partners.

“This is our first experience working hand-in-hand with WD-40 and it’s been exciting the whole way,” Vaccar says. “They were eager to hear our thoughts and then they also had some input of their own and it’s been a nice collaboration because it’s an exciting project for everyone involved. WD 40 has been very supportive with product and as a team member and then there’s been more than a handful of product partners that we work with over the years such as tires, wheels and gauges that jumped in to be part of the build just because it’s going to the SEMA Show and the tie in with SEMA Cares. A lot of people wanted to get involved, so a lot of product showed up very quickly and that certainly helped.”

In addition to this Bronco being at the 2017 SEMA Show in WD-40’s booth, the build was done in partnership with SEMA Cares, which helps connect people and companies in the automotive industry with numerous charitable endeavors.

“Everyone who’s involved with the project is excited because of the goal and what it’s going to achieve,” he says. “SEMA Cares is a big part of it for everyone because debuting at the SEMA Show is exciting, and for us to be at WD-40’s booth with something we’ve worked on is thrilling.”

Ultimately, this 1966 Ford Bronco is going to get auctioned off to benefit Childhelp, an organization that provides services to abused and neglected children, and the SEMA Memorial Scholarship Fund, which provides scholarships to students entering the automotive aftermarket.

“When you know what it’s all going to do at the end, it’s one thing to build a car, but it’s another thing to know it’s going to affect people,” Vaccar says. “That’s what makes it even more exciting.”

The Bronco will be auctioned in 2018 through Barrett-Jackson.