A gleaming, custom-green 1967 Chevrolet Camaro, used as a daily driver by a Jacksonville, Fla. enthusiast, is the grand-prize winner of the Champion Spark Plug brand’s “King of the Road” contest. Tim Kowalchick’s Champion-powered Camaro led the voting in the final round of the 10-week contest, which encouraged consumers to enter and select their favorite rides at www.AlwaysaChampion.com. Champion spark plugs are distributed by Federal-Mogul Motorparts, a division of Federal-Mogul Holdings Corporation. 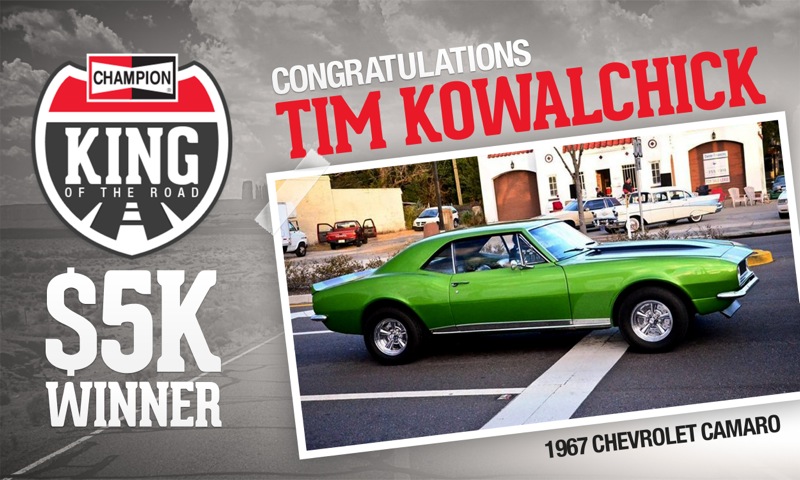 Kowalchick, the owner of a specialty automotive service business, receives the $5,000 King of the Road grand prize as well as $500 for winning one of the contest’s 10 weekly rounds. The 2014 King of the Road program garnered more than 550 entries and over 90,000 votes from among the Web-connected Champion community of “Performance Driven” enthusiasts.

“This is the coolest honor and a great reward for all of the hours I spent restoring my car in the driveway,” Kowalchick said. “We’ve won trophies at car shows, but to be selected by Champion and its thousands of fans is something I’ll never forget. I never would have won this if it weren’t for the encouragement of my family and the many friends I have met at car cruises, so I thank all of them.”

Other weekly winners and finalists in the 2014 contests were:

The Champion King of the Road program awarded $500 cash prizes to the winners of each of 10 weekly rounds of voting, with weekly winners automatically being entered into the $5,000 grand-prize round. Anyone could vote for their favorite entry and participate in other contests and promotions simply by completing a free registration at www.AlwaysaChampion.com.

“The best part of this contest was the variety of entries we received, from beautifully restored 60-year-old hot rods to late-model vehicles that have been enhanced with custom paint, wheels and Champion plugs. In each case, the owner obviously invested tremendous time, effort and pride in the project, and Champion is proud to shine a spotlight on their achievements,” said Jessica Wynn, global digital marketing manager, Federal-Mogul Motorparts.

To learn more about “Performance Driven” Champion products and to view this year’s 10 King of the Road finalists, please visit www.AlwaysaChampion.com.