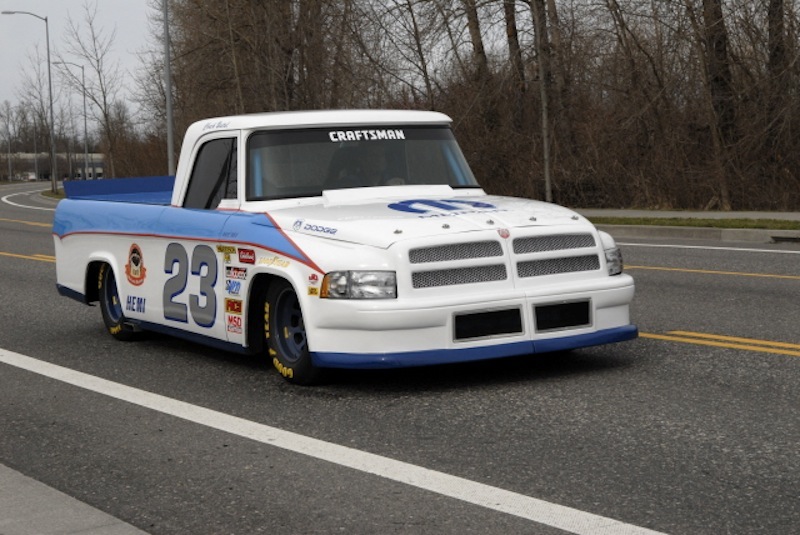 NASCAR has been moving away from its origins as a stock passenger car-based racing series for quite some time. The last of the truly “stock” cars were phased out in the ’70s. Theoretically, a stock car could be made street legal again with the addition of some headlights and turn signals and maybe a title, but today’s cars are purpose-built for racing and are far from street legal. They may look stock on the outside but underneath lies a pure-bred racing machine with tube frame chassis and highly adjustable suspension setups (The Dodge features front suspension from one of Sterling Marlin’s old Cup cars). But what if you wanted to make one street legal? They easiest way may be what American Racecar (ARC) has done with its 1969 Dodge, built to resemble a NASCAR Camping World race truck.

ARC uses a tube chassis similar to a NASCAR Cup chassis, which typically has a wheelbase length of 110 inches. A full roll cage is included, which gives an authentic stock car feel when climbing in and out through the window. However, for those who wish to open the door the old fashioned way,  ARC will build them to open the traditional – albeit boring – way.

A typical NASCAR racing engine runs on specially formulated, high-octane racing fuel and features a complex oiling system designed to keep them running at 9,000 rpm for 500 miles. This would not be practical for street usage, however, and they’re quite expensive even for a street rod. ARC uses engines that are modified just enough to look the part and sound like a race motor but run on pump gas. The company says it will install a carburetor or fuel injected engine in any of their streetable racers. This 1969 Dodge truck was outfitted with a late-model fuel injected 5.7L Hemi along with a 4-speed automatic transmission and a Ford 9-inch rearend with a 3:90 gear ratio.

Truck bed welded to the cab