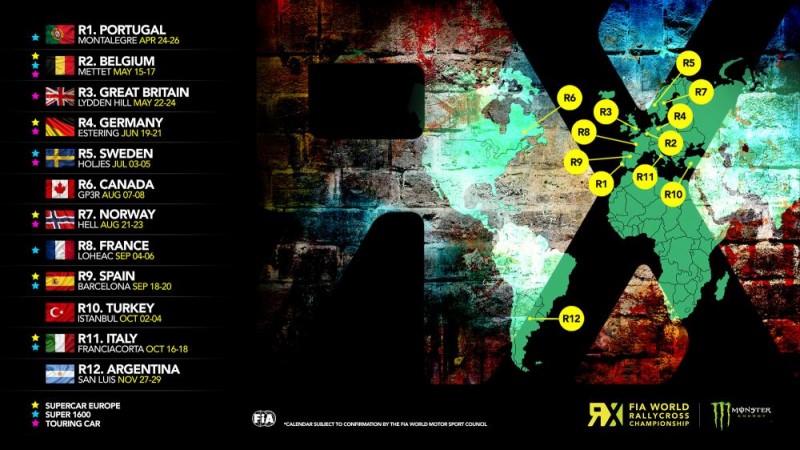 The provisional calendar will consist of 12 events including a new round in Barcelona, which will be staged at the F1 circuit from 18-20 September. Some of the existing events have also been given a reshuffle to help improve logistics for the teams.

World RX of Belgium will form round two of the season and will be held one week prior to the British round at Lydden Hill, which will resume its regular slot over the Spring Bank Holiday weekend (22-24 May). Other changes include Germany RX which will take place three months earlier in June, and the Norwegian RX round which will move to August. Turkey and Italy will swap places in next year’s calendar as the Italian RX race is set to form the penultimate round of the season. Argentina will stage the Championship season-closer at the end of November.

Building on the success of 2014, the highly-coveted FIA European Rallycross Championship (Euro RX) for Supercars will continue to run at five of the World RX events (Belgium, Germany, Norway, Spain and Italy). Following the model of the Supercar championship and after consultation with competitors, the Super1600 and TouringCar championships will also run over fewer events in 2015. The Super1600 championship will feature six events (Portugal, Belgium, Sweden, France, Spain and Italy) while TouringCar has five rounds (Belgium, Great Britain, Germany, Sweden, Norway).

The supporting RX Lites Cup will be made up of seven events: Portugal, Great Britain, Sweden, Norway, Spain, Turkey and Italy.  The RX Lites cars will also be present in Canada in the standalone Intercontinental Cup event.

Martin Anayi, World RX Managing Director at IMG Motorsports, concluded: “After a hugely successful inaugural season in World RX, we have received a steady flow of interest from venues across the globe which we have considered carefully over the past few months.  We’re conscious that we wanted to keep costs to a minimum and grow our Championship gradually so made the decision to retain 12 key events but changed the running order to make logistics better for the teams.  We have also included a new round at the Circuit de Catalunya-Barcelona.With a population of more than 1.6 million, Barcelona will likely grow to become one of our biggest events and it is very encouraging that prestigious motorsport venues are now building purpose built RX tracks.”

For a web version of the 2015 World RX calendar, please visit: http://www.rallycrossrx.com/2015_calendar