NASCAR announced the inductees who will comprise the 2015 class of the NASCAR Hall of Fame. The five-person group – the sixth in NASCAR Hall of Fame history – consists of Bill Elliott, Fred Lorenzen, Wendell Scott, Joe Weatherly and Rex White. In addition, NASCAR announced that Anne B. France won the inaugural Landmark Award for Outstanding Contributions to NASCAR. Next year’s Induction Day is scheduled for Friday, Jan. 30, 2015, broadcast on NBC Sports Network from Charlotte, N.C.

The NASCAR Hall of Fame Voting Panel met in a closed session in Charlotte, N.C., to vote on both the induction class of 2015, as well as the Landmark Award. NASCAR Chairman and CEO Brian France made the announcement this afternoon in the NASCAR Hall of Fame’s “Great Hall.” 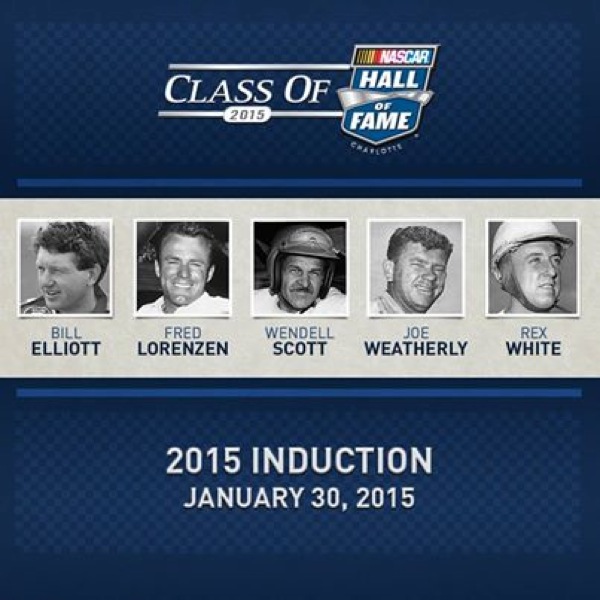 Next year’s class was determined by votes cast by the Voting Panel, which included representatives from NASCAR, the NASCAR Hall of Fame, track owners from major facilities and historic short tracks, media members, manufacturer representatives, retired competitors (drivers, owners, crew chiefs), recognized industry leaders and a nationwide fan vote conducted through NASCAR.com – which counted for the 54th and final vote. In all, 54 votes were cast, with two additional Voting Panel members recused from voting as potential nominees for induction (Jerry Cook and Robert Yates). The accounting firm of Ernst & Young presided over the tabulation of the votes.

The next top vote getters were Jerry Cook, Robert Yates and Benny Parsons.

The five inductees came from a group of 20 nominees that included:

As was announced last November during NASCAR Sprint Cup Series Champion’s Week, potential Landmark Award recipients could include competitors or those working in the sport as a member of a racing organization, track facility, race team, sponsor, media partner or being a general ambassador for the sport through a professional or non-professional role.

Bill Elliott
In a 37-year driving career, Bill Elliott compiled a list of accolades that put him near the top of a number of NASCAR’s all-time lists. His 44 wins rank 16th all time and his 55 poles rank eighth. But his most prestigious accomplishment came in 1988 when he won the NASCAR premier series championship with six wins, 15 top fives and 22 top 10s in 29 races. In addition, he won a record 16 Most Popular Driver Awards, in part because of his excellence on the big stage; he won the Daytona 500 twice and the Southern 500 at Darlington Raceway three times.

Fred Lorenzen
Fred Lorenzen was one of NASCAR’s first true superstars even though he was a “part-time” driver, never running more than 29 of the season’s 50-plus races. Lorenzen got his start in NASCAR as a mechanic with the famed Holman-Moody team in 1960, but was elevated to lead driver by the end of the year. Lorenzen won three races in only 15 starts the following season. Lorenzen’s best overall season came in 1963 as he finished with six wins, 21 top fives and 23 top 10s in 29 starts. Despite missing 26 races that season, he finished third in the standings. In 1965, he won two of NASCAR’s major events – the Daytona 500 and the World 600.

Wendell Scott
One of NASCAR’s true trailblazers, Wendell Scott was the first African-American to race fulltime in NASCAR’s premier series, as well as the first to win a NASCAR premier series race. Scott posted a remarkable 147 top 10s and 495 starts during his 13-year premier series career. He won more than 100 races at local tracks before making his premier series debut, including 22 races at Southside Speedway in Richmond, Virginia, in 1959 en route to capturing both the Sportsman Division and NASCAR Virginia Sportsman championships. Part of Scott’s NASCAR legacy extends to present day with NASCAR’s Drive for Diversity program, the leading youth development initiative for multicultural and female drivers across the motorsport industry since 2004.

Joe Weatherly
Joe Weatherly won two championships (1962-63) and 25 races in NASCAR’s premier series. But that’s only part of his story, which is long on versatility. A decade earlier in 1952-53, he won 101 races in the NASCAR Modified division, capturing that championship in 1953. He even tried his hand in NASCAR’s short-lived Convertible Division from 1956-59 winning 12 times. When he won his first NASCAR premier series championship, in 1962, he drove for legendary owner Bud Moore. When he repeated as champion a year later, he drove for nine different teams. Those were the only two years Weatherly competed in the premier series full-time.

Rex White
Consistency was the hallmark of Rex White’s NASCAR career. He finished among the top five in nearly a half of his 233 races and outside the top 10 only 30 percent of the time. White was a short track specialist in an era in which those tracks dominated the schedule. Of his 28 career wins in NASCAR’s premier series, only two came on tracks longer than a mile in length. Driving his own equipment, White won six times during his 1960 championship season, posting 35 top 10s in 40 starts. He finished in the top 10 six of his nine years in the series including a runner-up finish in 1961.

Anne Bledsoe France
Anne Bledsoe France, paired with her husband, NASCAR founder Bill France Sr., would create what today is one of the largest and most popular sports in the world. Anne played a huge role in the family business. Bill organized and promoted races and she took care of the financial end of the business. She first served as secretary and treasurer of NASCAR, and when Daytona International Speedway opened in 1959, she served in the same roles for International Speedway Corporation. She also managed the speedway’s ticket office. France remained active in family and business life until her passing in 1992.