Each year at the SEMA Show in Las Vegas the Mothers Shine Award celebrates the finest examples of vehicles in what has become one of the most coveted and prestigious achievements within the car builder community.

Aftermarket industry veteran and Shine Award judge, John Naderi returned to host the ceremony this year, which was held at the Mothers booth.

After reviewing the entire field this year, our judges awarded the 2017 Shine Award to “Afterthought,” a 1930 Ford Model A, owned by Ted and Colleen Hubbard of South Bend, NE, and built by CAL Automotive Creations of Bennington, NE. 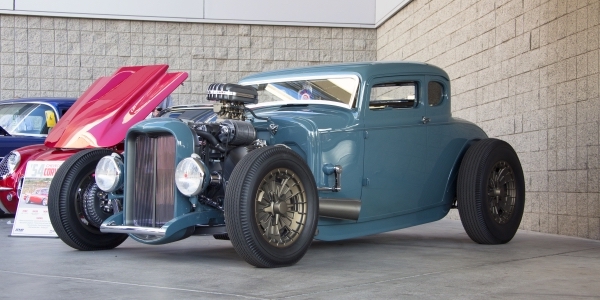 The Hubbards originally brought the coupe to Andy Leach and his CAL Automotive Creations team for a set of headers, and the project took off from there. Leach intensively reworked the coupe starting with a hand-built frame, reverse wedge sectioned body, reshaped rear quarter, hand-hammered cowl, machined bolt-on drip rails and a ’32 five-window roof. The paint is PPG Paleo-Historic Blue sprayed by Charlie Hutton.

The original headers are still on the car, now hidden by hand-fabricated covers made to look like cast headers, affixed to a supercharged Ardun Flathead Ford V8 with a C4 gearbox. The one-off Halibrand-inspired wheels are from EVOD Industries with custom rear tires from Coker. According to Leach, “There are only two off-the-shelf parts on this car — the front tires.” The interior features machined floor pans with one-off stamped rubber mats with custom upholstery work by the Recovery Room. 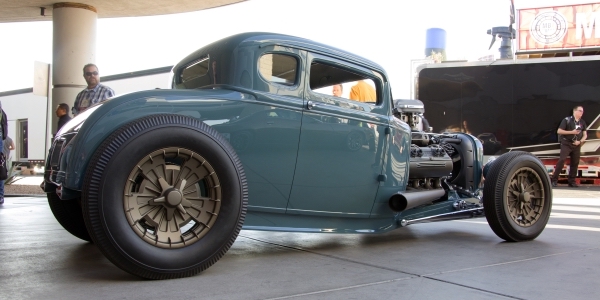 The Shine Award-winning Ford was on display at the main entrance by the Gold Lot.