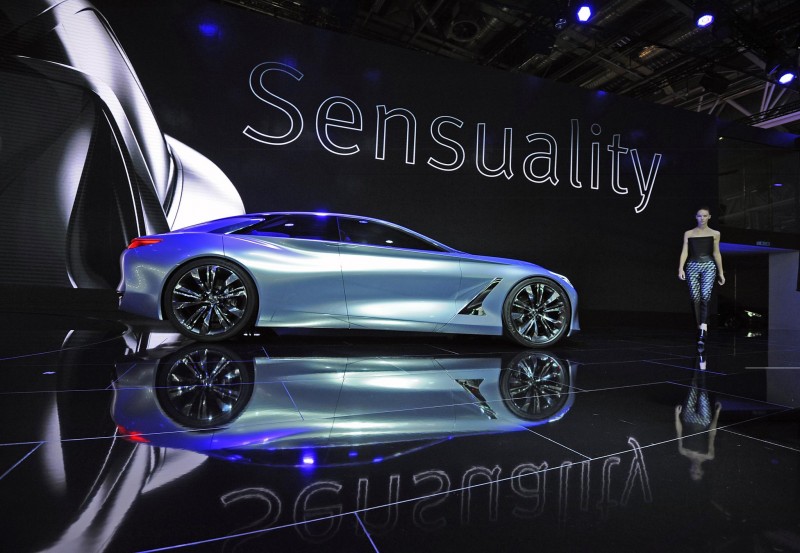 The four-door fastback aims to shake up the segment with progressive body styling and daring proportions that challenge convention. At five metres long and two metres wide, the Q80 Inspiration is only 53.1 inches (1350mm) at its highest point, further underlining its fastback contours.

Portal-style doors open into an artistically tailored interior which pampers the senses. The four individual leather seats give equal importance to driver and passengers, while the plunging panoramic glass roof creates a light, airy environment inside.

Showcasing ingenious innovations, the Q80 Inspiration previews autonomous driving technology which empowers and enhances the driving experience. It also provides a glimpse into a high-performance and efficient hybrid electric powertrain that is expected to deliver 550 hp while returning 5.5L/100km.

In addition, the new 2015 Infiniti Q70 made its premiere in Europe during the show, allowing visitors to admire the performance saloon’s fresh new looks. Powered by a new 2.2-litre, four-cylinder turbo diesel engine, it delivers 170 hp of power and 400 Nm of torque while retaining low carbon dioxide emissions.

Both the Q80 Inspiration concept and the new Q70 saloon embody the expansion of Infiniti’s upper range, providing strong indication that Infiniti is on track to increase its vehicle portfolio by 60 percent over the next five years, and to more than double the number of engines and transmissions.