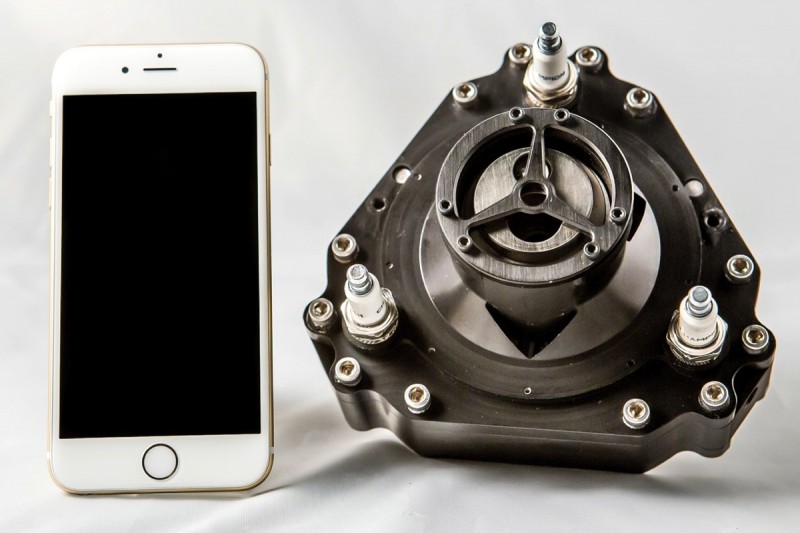 With the demise of the RX-8, many thought the rotary engine was dead. While it may still be on the wane in road cars, the future of the engine may be bright in smaller applications. Able to produce large amounts of power from a proportionately smaller displacement, the rotary engine could potentially be developed for a host of non-automotive applications. That’s exactly the idea that Liquid Piston, an engine company specializing in rotary engines, had in mind.

Their latest design is an engine the size of an iPhone. It has a displacement of 70 cc, and the final version will weigh less than three pounds. Even with its small size, the engine puts out around five horsepower and can apparently rev at near 15,000 rpm.

Called the X Mini, the engine does not use the conventional Wankel cycle, but instead runs on a special compression cycle that Liquid Piston developed, called the High Efficiency Hybrid Cycle(HEHC.) The engine contains three combustion chambers in its single rotor housing and allows for three power strokes per revolution, in contrast to the Wankel’s one.

Liquid Piston envisions the engine as an alternative to other smaller engine options, capable for a variety of applications such as lawn equipment, generators, robotics, motorized bicycles, and a host of other applications.

The video below goes into greater detail on the revolutionary new compression cycle developed by Liquid Piston.