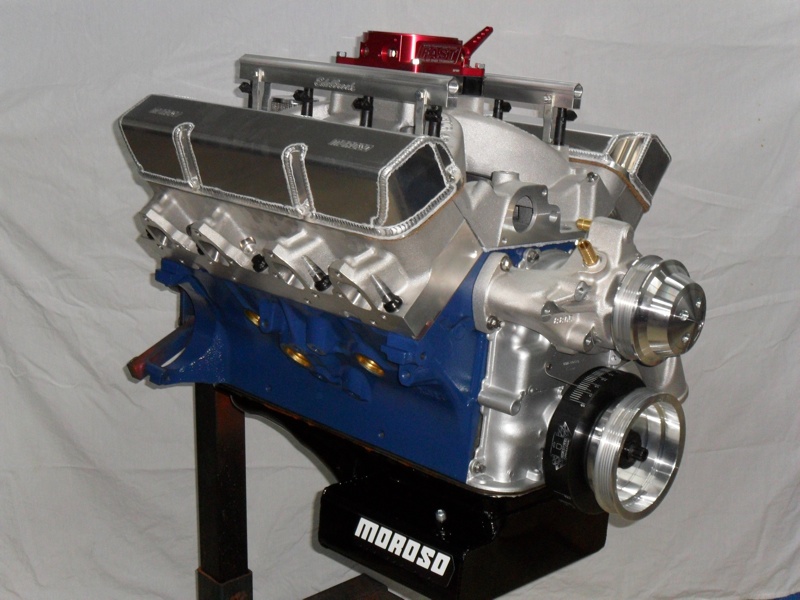 Several months ago, Engine Builder covered some history of the well-known Ford FE series engines. It’s amazing that these well-known, American Iron series engines do not get the recognition they deserve.

Ford produced the FE series engines for almost 20 years and in this time period, this series of engine gained quite a following. After researching the FE, I was intrigued about its internal workings. I had always heard about and seen some of the more popular FE engines such as the 390, 427 and 428 but never had a chance to dive into one.

A friend of mine had purchased a 1962 Galaxie a few years ago, and the previous owner had installed a 390 with a four speed in the car. The car was fun to drive and gained some nostalgic recognition on the road, but the engine did smoke quite heavily at times and did consume quite a few quarts of oil and foul several spark plugs on some very short trips around town.

The engine was supposedly rebuilt when my friend had purchased the car, but something was definitely wrong with this power plant. So, we took this opportunity to take the engine out so we could explore an FE engine.

Note: While company names are mentioned in this piece, it is up to the builder to research engine components and parts for a successful performance build. For more information on manufacturers and suppliers of performance engine parts, see the March 2014 Engine Builder’s Buyers Guide issue, or use the electronic version at www.enginebuildermag.com.

Breakdown on the Teardown

Here is a run down of the engine in the car. Upon tear down, the engine was a 390 cubic inch with points distributor, aluminum dual plane Shelby intake, Holley 750 double pumper carburetor with manual choke, and fitted with a set of 1-7/8” headers, which are unique and wrap around the frame of the car.

The engine had been bored .030” and fitted with a set of TRW dished pistons and a Comp Cams hydraulic flat tappet camshaft.

The engine had apparently been rebuilt, but the machine work on this particular rebuild was hideous to say the least.

The bores were out of round and had anywhere from .006” to .009” of bore taper. The valve guides in the cylinder heads were completely worn and the crankshaft looked as though it was starting to gradually eat the main bearings. Also, the camshaft was very hard to turn in the block.

These cylinder heads had some minor work done as far as some mild descent port work with new valves and a set of larger diameter springs.

There was a chance that we could possibly salvage these cylinder heads depending upon further teardown.

Turning a crankshaft is something that I generally will turn over to a good friend of mine who has machined crankshafts for years. The only problem that I had was one of some sad news. In the past several months, my friend had become terminally ill and could no longer machine.

So, I called around and someone had suggested another shop that would turn the crankshaft, which was in another town about 40 miles away. We shipped the crankshaft and waited a couple of weeks until its return.

When the crankshaft returned, we measured with a micrometer and could not believe our eyes. The crankshaft was in worse shape than when we had started.

It’s like whoever ground the journals on the crankshaft did not take the time to first index the crankshaft. The only thing we could

do at this point is to purchase a new one. But, where do you find a new crankshaft for an FE?

Well, that question was easily answered. It seems as though the FE was quite popular and that there are several companies that were catering to the hotrodders that love them.

Note: For more “stroker” components and suppliers, check out the July issue of Engine Builder magazine.

These crankshafts were also offered in forged 4340 or cast nodular iron and were fitted with FE main journals 2.438” and smaller big block Chevrolet rod journals which are 2.200”. The “stroker” assembly also came with your choice of H-beam or I-beam rods with your choice of two different lengths 6.49” (stock) or 6.700” and premium forged pistons with flat-top or dish design.

When we first started the project, we were looking basically just to do a stock rebuild and to learn more about the FE.

At this point, we still want to keep a budget build in the back of our mind, but which stroke should we use?

Our stock iron cylinder heads were ok, so if we used them we felt that a small stroke increase would be beneficial and also gain some cubic inch displacement. We found a SCAT rotating assembly while shopping online for a little under $2000, which consists of a cast 4.125” stroke crank, H-beam connecting rods, and .030” over Mahle flat top pistons and rings.

So, we started the block prep anticipating the arrival of our bottom end. We bored and honed the cylinders to 4.082”, align honed the mains, and decked the block .017” which would bring the pistons out of the bore above the deck about .003”.

We sonic cleaned the block and installed new cam bearings continued to start disassembling the cylinder heads. Once again, we were faced with a roadblock.

The guides in the cylinder heads were worn and the valve seats were literally destroyed and the valve faces were pitted and would not clean up in the valve grinder.

The rotating assembly arrived so we checked the balance of the crankshaft assembly with our flywheel and clutch components andended up adding some Mallory (heavy metal) to the crankshaft to complete the balancing procedure. 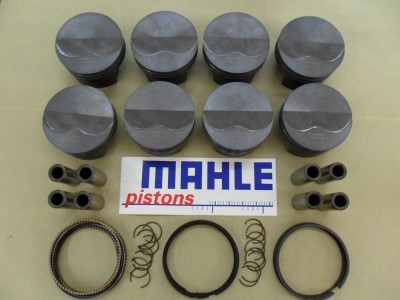 The clearance checks were performed on the connecting rod bearings and main bearing of the rotating assembly and averaged from .0027” to .003 on the mains with .005” of thrust clearance and .0024” to .0026” on the rods.

The pistons had .0055” cylinder bore clearance and the rings were filed to fit with .018” on the top ring and .022” on the second ring. With such a nice and beefed up bottom end in this FE the only way to compliment these internal components was to use a set of aluminum heads.

Of course, the word budget came up again, but at this point we had thrown it out the shop door.

Heading into the Headwork

Aluminum cylinder heads for the FE are pretty common. There are a couple of companies making aluminum replacement cylinder heads, but Edelbrock seemed to be the best choice for our application. Edelbrock offers several different versions of the FE cylinder head that will fit a variety of FE engines that are reasonably priced. 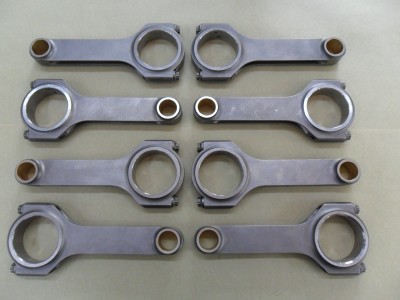 We choose a bare cylinder head with unfinished seats and guides because we wanted to do our own port work and fit the heads with our choice of valves for this bore size. Stock size valve stems on the FE is 3/8” and we were going to install 11/32” stem valves.

Once we received the valves, we sent the heads to Brian Maloney of Maloney Competition Systems in Martinsville, VA, to change the valve guides, a multi-angle valve seat job and port the cylinder heads.

To further compliment the cylinder heads, we wanted to upgrade the existing stock rocker stands. Not knowing our camshaft profile at this time, our thoughts were entertaining the idea of a solid-roller camshaft. Since the camshaft would be more aggressive some stronger rocker shafts and supports along with roller tip rockers would be cheap insurance for our application.

Since our project had progressed into a real nice piece of art with some really nice parts, why not bring the old into the new. Our previous engine was carbureted, so why not compliment this build with modern day fuel injection. FAST (Fuel Air Spark Technologies) builds several different combinations of an EZ-EFI system for an FE application.

For our combination, we chose a multi-point system, which came with an Edelbrock Victor single plane intake, 1375 cfm throttle body, 36 lb. injectors (we opted for 60 lb. because we wanted to make more than 500 hp), wiring harness and ECU, fuel pump and all related sensors, fittings, and fuel line.

By choosing the fuel injection we could modernize the vehicle but also wanted to improve drivability and hopefully gain some fuel efficiency. It’s not that we couldn’t tune the carburetor for various driving conditions because that is what we could have done years ago.

We really wanted to give this FE a modern day appeal. In fact, when dyno testing the engine, we are going to run the engine on the carburetor with electronic ignition and then bolt on the fuel injection to compare. The biggest difference in the comparison will be the size of the throttle body compared to our Holley 750 carburetor.

After the port work and changes were completed on the cylinder heads and intake we had to get some flow numbers.

Not only to see where we stood on airflow, but to also help aid in designing the camshaft profile. Airflow is very important to know where to fully open and close the intake and exhaust valves for maximum power for your application.

Our combination yielded 11.0:1 compression with 431 cubic inches, so with our ported cylinder heads and intake along with our 1-7/8” headers and four-speed transmission, a custom grind camshaft was in order.

We wanted the engine to have great throttle response, good vacuum, and low down stump pulling torque, but make some horsepower on the top end. Camshafts are a unique science and while there are only a handful of people who can see these events and understand them, means that camshafts are often miss-ground.

For camshaft knowledge and custom grinds, I often use Dema Elgin of Super Lobes. Located in southern California, Dema has been in the camshaft grinding business since 1957. For this application he recommended a lobe separation of 112-degrees on a single pattern grind with 261-degrees of duration at .050” and .383” of lobe lift, which with 1.75 rockers would yield .640” lift with .026” of lash.

We had breathed new life into our piece of American Iron, and it was becoming exciting. With the engine near completion, we wanted to find some dress-up items to enhance our historic piece.

Low and behold if we did not find that Moroso manufactures a set of billet aluminum valve covers for an FE.

Not only would these be a great addition, but they also manufacture an 8-quart kick out road race oil pan that is powder coated with internal baffling. These items prove to be a real work of craftsmanship and were a nice ­addition to our project.

Two things to mention for this build would be fasteners and the harmonic damper.

First of all, the entire engine was outfitted with ARP fasteners. The SCAT connecting rods came standard with 7/16” ARP bolts, but ARP also carries a complete line of fasteners for the FE engines.

A great way to insure consistent performance from an engine is by the bolts that hold it together.

Second, would be the harmonic damper. Torsional vibrations in an engine become out of control and will destroy the engine. Remember that every action has an equal and opposite reaction.

Also, when the crankshaft flexes from the cylinder firing, it has to rebound. Fluidampr by Horschel Motorsports offers a damper for the FE engines and we felt that with the reputation of Fluidampr this would also be great insurance for the power levels we were in hopes of achieving.