The most famous motor-diner on the planet welcomed the world’s fastest motorcyclist during Ace Cafe Orlando’s world debut back in May. Rocky Robinson, three-time motorcycle Land Speed Record holder, was on hand to give the Ace the green flag. What was kept under wraps was the fact that Ace Cafe is joining the quest for 400 mph with Rocky and the TOP 1 ACK ATTACK. The team is headed to the world’s highest salt flat in Bolivia for the Top of the World Landspeed Trial on August 3-8, 2017. 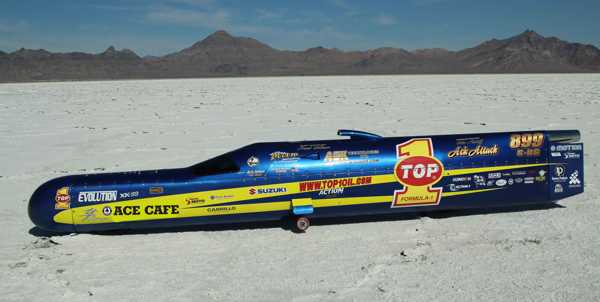 “It is go time,” says Mark McKee, CEO and Chief Gearhead of Ace Cafe North America. “As the home for all who share a passion for speed, thrills and rock ‘n roll, Rocky’s quest for 400 mph on a motorcycle is the perfect place for Ace. We are honored that Rocky is taking us along for the ride!”

“Records are made to be broken – especially Land Speed Records,” said Robinson. “The TOP 1 ACK ATTACK is headed to the Salar de Uyuni salt flats in the Andes mountains and we are going to go faster than 400 mph.” All systems are go for the twin-engine streamliner. “Bolivia has been selected because it has a much longer run up and down of more than 15 miles versus about 7 miles at Bonneville,” he explained to the crowd at the Ace. 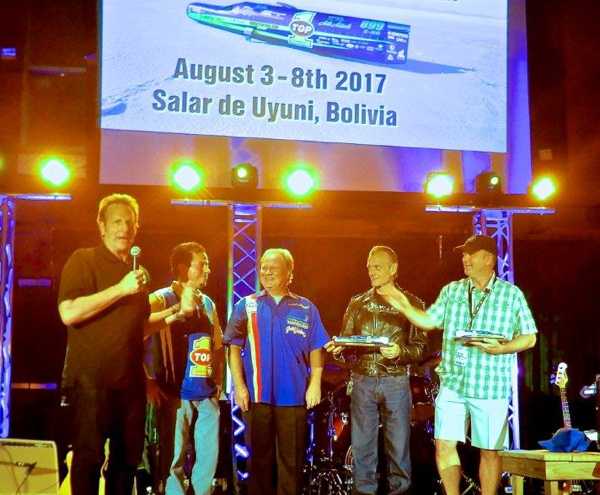 The making of a Legend of Speed: On September 3, 2006, Rocky rode the TOP 1 ACK ATTACK to a new motorcycle land-speed record at the Bonneville Salt Flats, reaching a top speed of 342.797 mph, a whopping 20 mph faster than the previous record, which had stood since 1991. In 2007 he tried to better his speed, but crashed at speeds in excess of 320 mph and rolled 16 times!

Undaunted, Robinson returned to Bonneville in 2008 and piloted the ACK ATTACK to a second world record of 350.884 mph. On September 25, 2010, for the third time in four years, he set a new world’s record, blasting his own record to oblivion by traveling 376.363 mph.

“Conditions are even better in Bolivia than they were at the Bonneville salt flats,” said Robinson. He has spent the past month training in high elevation in the Colorado Rockies to be ready for the nearly 12,000-foot elevation of the Andes mountains.”

“TOP 1 ACK ATTACK is ready to rock, but we will skip the roll this time,” joked Robinson. Follow the TOP 1 ACK ATTACK’s the quest for 400 mph at: https://www.facebook.com/top1ackattack/ or