Aeromotive has been chosen by Ringbrothers as the fuel tank and pump of choice for the majority of the company’s future custom vehicle builds. The exception will be vehicles that are OE projects that need to remain stock. 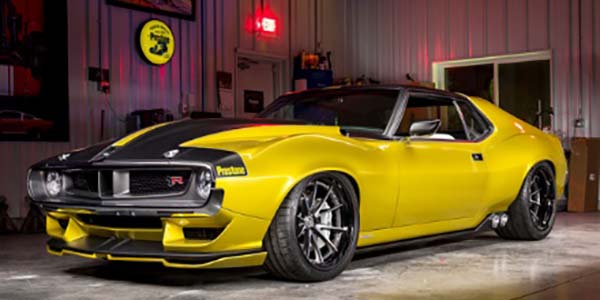 Over the past decade, Ringbrothers has rocketed into the top ranks of American car builders, winning numerous design awards. Past accolades include winning numerous Design Awards and Best of Show Awards from Ford, Chevy and General Motors, four cars in the Battle of the Builders Top 10 in three years, winning back-to-back Goodguys Street Machine of the Year awards, and winning multiple Mothers Shine awards. In addition, the company’s vehicles have been on the cover of countless magazines.

Recently, the brothers were invited to showcase their Aeromotive equipped 1972 Prestone AMC Javelin AMX with Jay Leno for an episode of the YouTube series, “Jay Leno’s Garage.” “We have tried other fuel pumps that simply did not work,” said Jim Ring. “Putting together the entire fuel system is a very time intensive part of each build, and when a problem is encountered, not only is it a time intensive fix, but typically, we have to eat that cost. Once we connected with Aeromotive, we found that no matter what we were building, they always had a solution for us.”

Mike Ring added, “As custom vehicle builders, we have found that once you find a combination that works, there is absolutely no reason to upset the apple cart. Once we partnered with Aeromotive, which was four or five years ago, our fuel pump problems went away.”

Aeromotive president, Steve Matusek says, “Ringbrothers consistently choose Aeromotive fuel systems for their project builds because of our commitment to quality, tech support and our mutual passion for building exceptional vehicles that sets the bar for performance. They are great to work with and it is always exciting to hear their plans of what they plan to build next.”

The Ringbrothers’ shop headquartered in Spring Green, WI, pulls double duty, serving as a collision and repair shop to the community in addition to delivering one to two custom built cars a year. Ringbrothers also manufactures and sells an entire line of high-quality billet accessories as well as custom fiberglass and carbon fiber pieces.