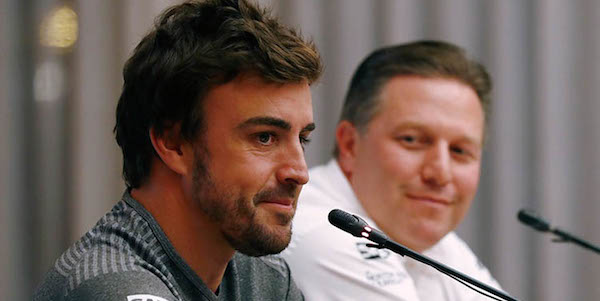 Fernando Alonso, the two-time Formula One champion announced last week to drive in the 101st Running of the Indianapolis 500 presented by PennGrade Motor Oil in May, will be speaking to the media this Sunday, April 23 at Barber Motorsports Park in Birmingham, Alabama. The racetrack is site of this weekend’s Honda Indy Grand Prix of Alabama, the third race on the 2017 Verizon IndyCar Series schedule.

Joining Alonso for the news conference will be Zak Brown, executive director of McLaren Technology Group, the parent company of the McLaren Formula One team for which Alonso drives; Michael Andretti, CEO of the Andretti Autosport team fielding Alonso’s Indianapolis 500 entry; and Mark Miles, CEO of Hulman & Company, the parent of INDYCAR and Indianapolis Motor Speedway.

Alonso and his McLaren Honda F1 team are coming off a tough race last weekend in Bahrain. The team’s second entry, driven by Stoffel Vandoorne, failed to start the race, and Alonso fared only slightly better, but still lost two MGU-K hybrid engines.

The news conference will be streamed on Facebook Live at https://www.facebook.com/indycar.