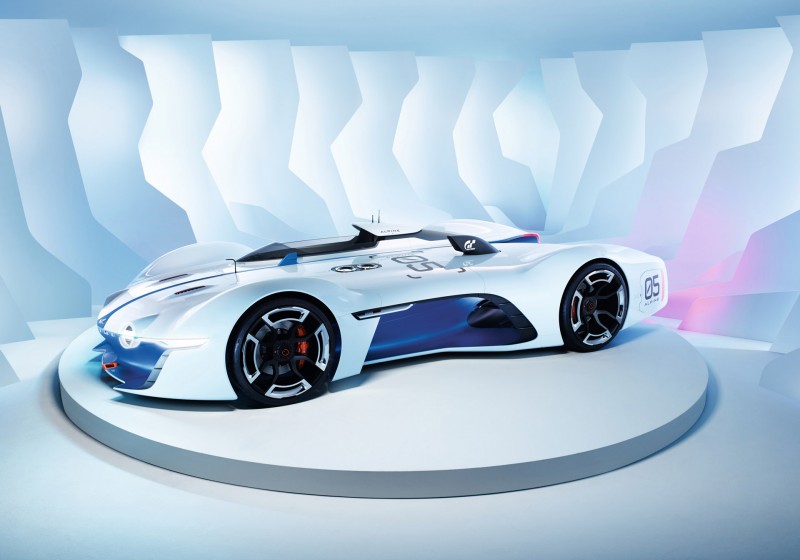 News that Renault has been relaunching its historic Alpine brand as it special performance marque has been circulating for quite a while now. Several concepts and a few race cars have served as a statement from the French automaker that they meant business when they said they were bringing Alpine back from its 20 year dormancy. Now, we have another look at future Alpine engineering, and the result is stunning.

Alpine is slated to launch its first sports car in 2016, and it isn’t exactly known what the car will be or what form it will take. However, the vehicle above is a virtual concept called the Alpine Vision Gran Turismo, and it will soon be available for download as a virtual racer on Gran Turismo 6 for Playstation 3. Though not exactly reminiscent of the new sports car coming under the Alpine label in 2016, the concept may give us some clues as to what that will look like.

The concept hearkens back to the “speedster” style that was popularized in the 1950s and 1960s. Don’t let the older looking design fool you though; the car is full of modern technology and performance.

The Alpine Vision Gran Tursimo theoretically sports the same 4.5 liter V8 that is found in the Alpine A450 LMP2 racer that was released last year and competed in the European LeMans series. The engine produced 450 horsepower and 427 lb, ft. of torque. Capable of a top speed of 200 mph, the car weighs in at just 2,000 lbs.

The modern spin on classic styling comes in the form of a carbon fiber monocoque chassis. A double wishbone suspension complete with adjustable dampers and racing style push-rods support the car’s mid-mounted engine.

A full scale replica of the car will be showcased next month at the 2015 Salon Retromobile, in honor of the historic brand’s 60th anniversary. If one thing is clear, it’s that this concept is ostensibly making the entire automotive community even more excited for the reveal of the brand’s first official production model next year.

The video below gives a view of the of the concept and provides interesting commentary from the Renault design team.