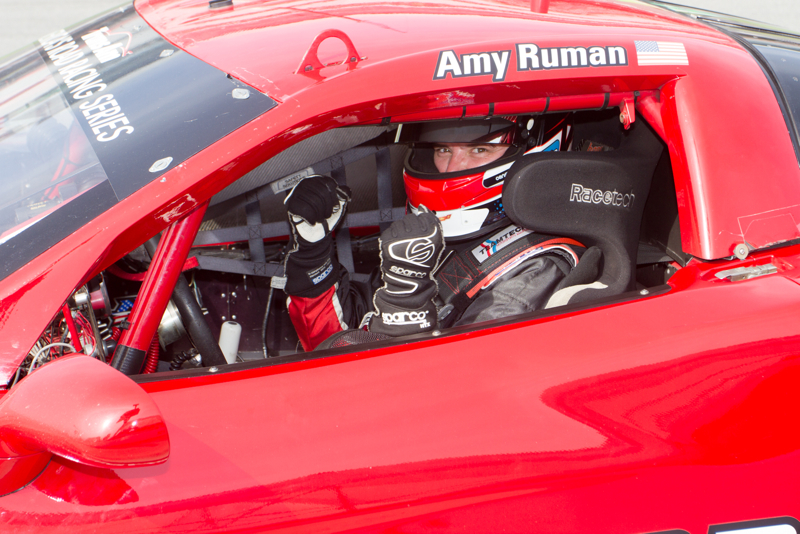 Amy Ruman and Gar Robinson added their names to the long list of Trans Am Champions with victories at Daytona International Speedway in the final race of the 2015 Trans Am Championship—Bullet Liner Championship weekend. For Ruman the victory marked her eighth of the year, closing out 2015 in style for a driver who only needed to take the green flag to secure the TA class Championship. Robinson’s victory came from a last gasp pass over Adam Andretti for the win, and the Championship.

Ruman, in the No. 23 McNichols Company Chevrolet Corvette, began the race in second position, clinching the TA Class Championship as she passed the green flag—the added luxury of a dominant seven wins in the previous eleven rounds. With points calculations aside, Ruman was free to race without restraint and began her pursuit of pole sitter, and her once primary rival for the Championship, Paul Fix, in the No. 4 StopFlex.com/TheCarCoach.com Chevrolet Corvette. In the end Ruman overcame Doug Peterson, the previous Champion and race leader at the time, for first position with six laps to go—securing her eighth win of the 2015 Trans Am Season.

Ruman’s Championship is her career first, adding her name to the 49-year long list of Trans Am Champions, yet still blazing her own path, becoming the first woman in those 49 years to capture a Championship—making her mark on the Series’ history and that of professional road racing in North America. Ruman, following in her father’s footsteps, long-time Trans Am racer Bob Ruman, completed a nearly 20 year long journey for the family-based team out of Monroe Falls, Ohio. 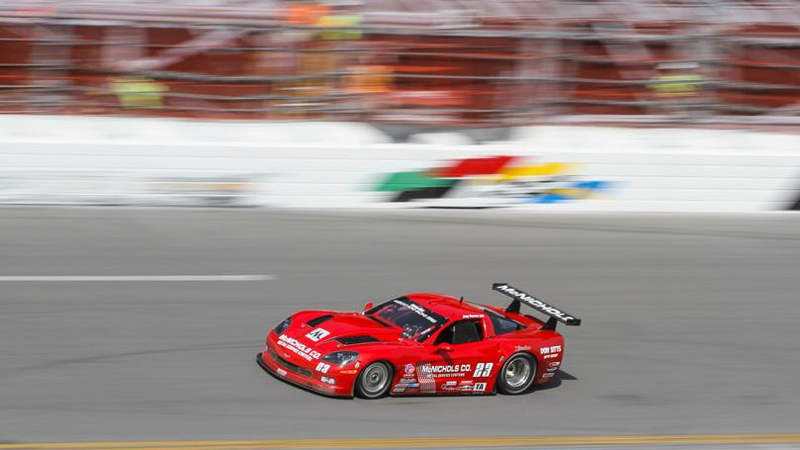 “It’s an amazing feeling; I feel so blessed,” said Ruman. “I’m so excited for my team and my parents—my mom and dad who have been at this for so long. Most of the guys on our team have been with us the whole time—nearly 20 years of Trans Am Racing. We’ve had McNichols onboard all these years, and this team together for so long…to finally bring it home after everything is just awesome.”

Ruman has been racing in the Trans Am Series since 2005 and became the first woman to win a Trans Am race in the 2011 Championship Finale. From that point on Ruman has been a perennial top five contender and podium member, entering the 2015 season with a total of five wins in her Trans Am career— a mark she nearly doubled this season, pushing her total to 12 career Trans Am victories.

“I think finally it all just gelled and came together. We have a really well-prepared car. We switched to PME motors; they’ve been strong for us all year, that was a great move. My dad has dialed in the setup on the car; we’ve had it for three or four years now. I think finally all the pieces of the puzzle came together, and we had a really good year. I drove smart and we were there at the end when we needed to be. We had some absolutely dominant wins and some where we had to come from the back a few times. There was a little bit of everything, but it was just a fantastic year for us.”

As for adding her name to the long list of Trans Am Championships, Ruman remained humble.

“You know,” Ruman said, “I don’t think it has really sunk in yet. It’s a great list of names to be included with, the female aspect, being the first—it’s always fun to be the first at anything and to be amongst those drivers’ names is just a blessing.”

Ruman finished the year with 345 points to take home the 3-Dimensional Services Trigon Trophy, and was followed by Paul Fix, with 311 points, and Baucom with 266 points to close out the Championship top three. Doug Peterson finished the year fourth in the Championship with 250 points while Simon Gregg, in the No. 59 Derhaag Motorsports Chevrolet Corvette, finished fifth with 225.

Gar Robinson’s capture of the TA2 Championship was far less straightforward, entering the weekend 13 points behind two-time Champion Cameron Lawrence and just five ahead of Adam Andretti, driver of the No. 44 Engineered Components Chevrolet Camaro. However, when Lawrence started 26th, the result of an extremely brief second chance qualifying due to a substantial wreck in turn seven, Robinson was given an additional window of opportunity. Starting in fifth position, Robinson began his pursuit of both Adam Andretti, starting in second position, and polesitter Tony Buffomante, in the No. 34 BestLine Superior Lubricants Ford Mustang. 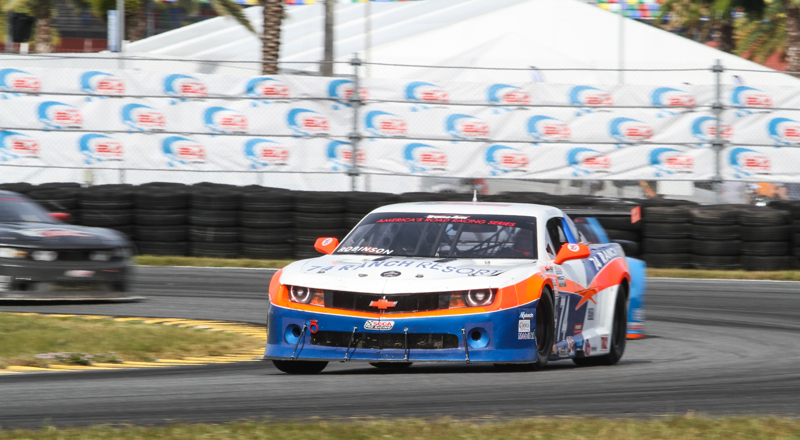 The front of the TA2 pack remained close throughout the race with Buffomante, Andretti, Robinson, Shane Lewis, Dillon Machavern, and a multitude of others all featuring in the top five. On the final restart of the race, Robinson remained in third, pursuing both Buffomante and Adam Andretti, now in first place. Robinson was able to pass Buffomante for second position, with Andretti still leading. If the order had remained the same Andretti would have clinched the Championship on tiebreakers.

Further down in the field Cameron Lawrence, in the No. 1 MOPAR Dodge Challenger, had charged up through the field into 11th position after only three laps; however the No. 1 began to experience mechanical issues forcing it to briefly pit. Lawrence again was faced with misfortune when the first full course caution came out, placing him behind the TA class leaders but in front of the TA2 class leaders—placing him a lap down and limiting his opportunity to move up the field once more, ultimately finishing 18th.

Later on in turn five with two laps to go, Robinson made his move, overtaking Andretti for the lead in turn. The move ended up being the one to capture the TA2 Championship, as Robinson began to pull away over the final lap and crossed the checkered flag to secure the victory and ensuing title.

“The emotions haven’t really caught up yet,” said Robinson. “I can’t believe we’re finally here; our rookie year, two years ago, we thought about coming into the Series, last year we wanted to win a race, and the year after that, this year, we wanted to try and win the championship. And we actually did it!” 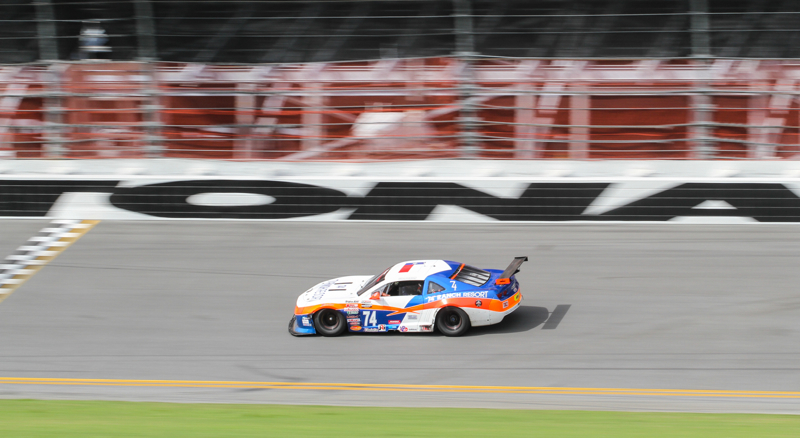 “The race was perfect—I think it was a better race than we had at Mid-Ohio. We ran through the final five laps of this race, they were just incredible. We were all so close and no one touched a door to each other, no one hit anyone. The fact that the front runners were able to race clean, the outcome was perfect—I couldn’t think of a better way to end the season!”

Robinson is also a second-generation Trans Am driver, following in his father’s footsteps in the No. 74 74 Ranch Resort Chevrolet Camaro, bearing the same livery and with many of the same crew members who worked on his father’s team in the late 1980s and early 1990s.

“The racing in TA2, and Trans Am, is just awesome. The cars are amazing; its inexpensive to run and the class of drivers you are up against, race in and race out, are at an incredible level— it’s been an amazing learning experience and it’s a fantastic Series to be a part of.”

Andretti would end up being overtaken by Buffomante on the final lap, falling back to third, and second in the TA2 Championship. The victory was Robinson’s third of his rookie year and ninth podium appearance, as he finished the season with 298 points. Andretti would follow closely, just eight behind, with 290 to his name, while Lawrence finished the year with 288, 10 off of Robinson, and in third position. Robinson’s teammate, Shane Lewis, in the No. 72 74 Ranch Resort Chevrolet Camaro, would finish fourth in the Championship while fellow rookie Dillon Machavern, in the No. 25 Heritage Motorsports Ford Mustang, captured fifth in the Championship.

The podium trio of Robinson, Buffomante and Andretti was followed by Joe Stevens, in the No. 11 MOPAR Dodge Challenger, who finished a career high fourth and Jordan Bernloehr, in the No. 07 Pro Kart Indoors Chevrolet Camaro, who also completed a career high finish in fifth.

The Series will now begin preparations for its 50th Anniversary, the 2016 Trans Am Championship, with the first race slated for March 6, 2016, at Sebring International Raceway.