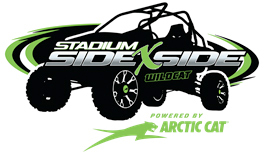 “Our Stadium Wildcat Side-by-Side Series is a result of our partnership with Robby Gordon and our efforts to solidify Arctic Cat as a major sponsor of racing,” said Arctic Cat Chief Marketing Officer Greg Williamson. “Our brand stands for exceptional performance and this series reflects Arctic Cat’s commitment to delivering the ultimate off-road riding experience.”

The first Arctic Cat Stadium SxS Series race will debut at the Sands Sports Super Show in Costa Mesa, Calif., on September 18-20, 2015. The second and final round for 2015 will be held at the Las Vegas Convention Center on November 3-6 during the SEMA show, which is the world’s premier automotive specialty products trade event.

In addition, Arctic Cat will be the proud sponsor of the #29 Team Wildcat Racing Stadium Super Truck for the remainder of this season, and will continue the sponsorship into the 2016 season. Wildcat branding in an eye-catching black and Arctic Cat green color scheme will adorn the #29 Stadium Super Truck.

SPEED Energy Formula Off-Road features identically prepared, high-horsepower trucks that can race on virtually any surface generating speeds of up to 130 mph. Races feature man-made ramps set in strategic locations throughout the course to provide high-flying excitement for thousands of spectators at IndyCar, X Games and other large events. The racing series is televised on NBC and the NBC Sports Network and concludes its 11-race, 2015 season in November at the SEMA Show in Las Vegas.