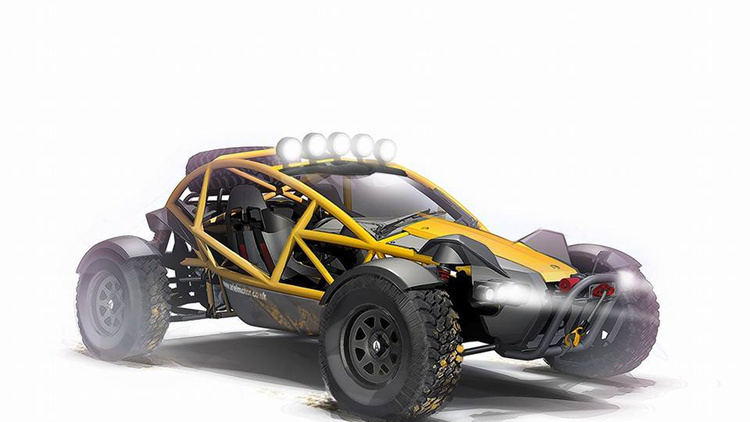 The Ariel Motor Company, known for its lightweight Atom roadster, has just unveiled a new addition to their model lineup- an off-road dune buggy-esque vehicle known as the Nomad. The Nomad is designed  with the intention of allowing Atom enthusiasts the opportunity to take their cars off the well worn path.

Ostensibly built on an Atom platform, the Nomad weighs in at just over 1,500 lbs and is equipped with the same 2.4 liter Honda in-line four that is found in the Atom, coupled to Honda’s six speed manual transmission. All told, the Nomad puts out around 200 horsepower. It is unknown whether or not performance variants will be unveiled in the future, and many of you are undoubtedly already pondering the good a supercharger could do on this thing.

The steel ladder frame and full roll cage make the Nomad suitable for any off-roading or rallying adventure, but the model is being developed for road use as well. The Nomad will have nearly four times the power to weight ratio of a Land Rover Defender and comes equipped with a long travel suspension, yet lacks the four-wheel drive inherent to many vehicles of this caliber.

The Nomad will have a base price of just under $50,000, and it has been confirmed that a variety of more expensive options will be made available. In regard to performance, Ariel chief Simon Saunders remarked,

“The car should still be very quick on road… Not quite as quick as an Atom, maybe, but it will be able to do many things an Atom never could.”