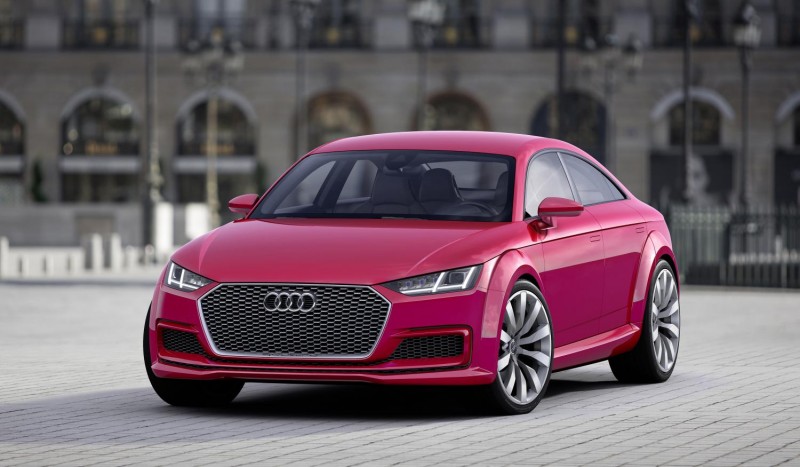 Audi has drawn inspiration from its five-door A5 and A7 Sportback models, which artfully blend the rakish lines of a coupé with the real world practicality of an executive class car, to create the TT Sportback concept, which will make its world debut at the Paris Motor Show. Adding 29 centimetres to the length of the ‘standard’ TT to incorporate its extra rear doors, the full four-seat show car takes the famous silhouette in another new conceptual direction, and its 2.0 TFSI engine also expands considerably on its more familiar output in the production coupé, weighing in at a brawny 400PS.

The mighty 400PS output delivered by the Audi TT Sportback concept flows through a seven-speed S tronic twin-clutch transmission to the quattro permanent all‑wheel drive system, helping to peg the 0 to 62mph sprint time at just 3.9 seconds. The sophisticated suspension and the low centre of gravity ensure dynamic handling, and the body integrates a number of lightweight aluminium components. A laser spot that complements the LED high beam is featured in each of the headlights – this innovation from Audi significantly boosts safety when driving in the dark.

As a member of the Audi EA 888 engine family, there is a comprehensive package of high-end technology on board for the turbocharged direct-injection unit. The camshaft adjustment on the intake and exhaust sides and the Audi valvelift system, which varies the stroke of the exhaust valves in two stages, ensure good filling of the combustion chambers. At part load, indirect injection complements the FSI direct injection. The exhaust manifold embedded in the cylinder head is an important component of the thermal management. The flow of coolant is managed by a powerful rotary slide module.

In order to generate the high power output, the 2.0 TFSI unit has undergone extensive modifications, including the integration of special aluminium pistons with an integrated cooling channel and a crankshaft made from ultra-high-strength forged steel. The crankcase consists of a new, high-strength casting alloy and the cylinder head has been designed for the increased gas flow rate. The turbocharger has also been redeveloped and builds up a maximum relative boost pressure of 1.8 bar. It contains a mixed flow turbine wheel that is noted for its particularly fast start-up performance.

The turbocharged direct-injection engine rockets the Audi TT Sportback concept from 0 to 62mph in 3.9 seconds, demonstrating excellent response characteristics and running at 7,200 rpm up to the maximum rated speed. The sonorous sound is made even more resonant as the load and engine speed increase.

The force of the engine flows into a compact seven-speed S tronic with a three-shaft layout that performs direct gear changes in a few hundredths of a second. The driver can let the dual-clutch transmission operate in two automatic programs or take control using the paddles on the steering wheel.

Power is delivered to the road via quattro permanent all‑wheel drive. For optimal weight distribution, the hydraulically actuated and electronically controlled multi-plate clutch is located on the rear axle. The quattro drive actively controls the distribution of torque between the axles in milliseconds, thus adding to the car’s agile handling.

The suspension also reflects the technological expertise behind the Audi TT Sportback concept. The front suspension is based on a McPherson system; aluminium components reduce the weight of the unsprung chassis masses. The four-link rear suspension can process the longitudinal and transverse forces separately.

The large wheels have a 21-inch diameter and a tyre format of 255/30. The four brake discs in 18‑inch format feature a weight-saving wave design.

The Electronic Stabilisation Control (ESC) adds the final touch to the handling. A sub-function of the ESC is enabled at the cornering threshold – through minimal application of the brakes at the wheels on the inside of the bend, which have a reduced load, the wheel-selective torque control diverts the drive torque to the wheels on the outside of the bend. For the driver, this means a further boost in terms of neutrality, stability and traction.

The body plays a leading role in the lightweight construction concept of the Audi TT Sportback concept on the basis of the modular transverse matrix (MQB). The entire front section is made from steel. The passenger compartment floor comprises high-strength, hot-shaped steel components which, thanks to their outstanding strength properties, feature thin walls and are correspondingly light. The passenger compartment and all outer skin and attachment parts are made of semi-finished aluminium in the form of cast nodes, extruded profiles and sheet metal.

With its composite concept, the body represents the latest evolution of the Audi Space Frame (ASF). Its hybrid construction ensures that the show car has a low centre of gravity – ideal for more committed driving. 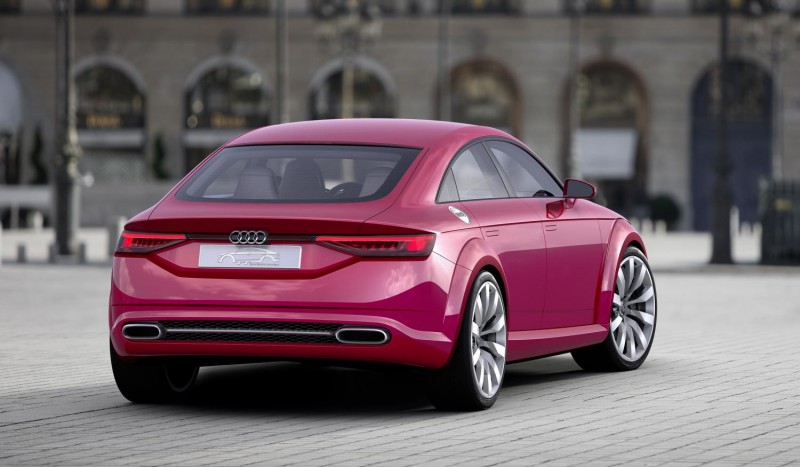