A historic day for the Daytona 500 produced an emotion-filled result that will stand tall alongside the many other epic finishes that have built the tradition of “The Great American Race.” 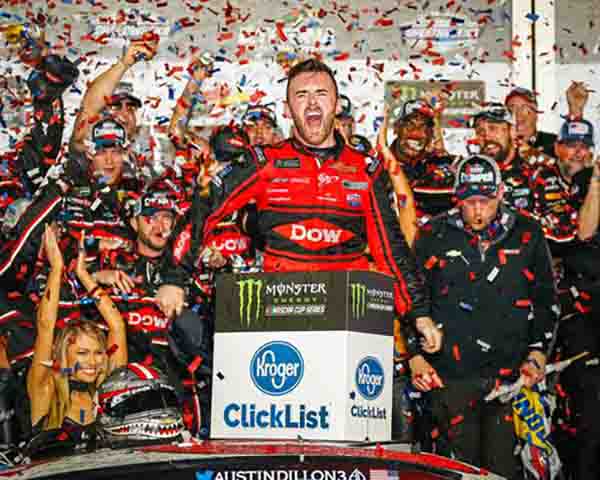 Twenty years after Dale Earnhardt ended a career-long drought by winning the Daytona 500 in the famed No. 3 Chevrolet of Richard Childress, Austin Dillon – Childress’ grandson – returned the No. 3 to Gatorade Victory Lane at Daytona International Speedway. And he did it with a last-lap, bump-and-run move that was absolutely Earnhardt-like, to boot – in the 60th running of the season-opening race for the Monster Energy NASCAR Cup Series.

A Lap 199 late-race incident took out a number of front-running contenders and forced two extra laps of “NASCAR Overtime.” On the first OT lap, Tampa native Aric Almirola (No. 10 Smithfield Ford) assumed the lead and as the final lap transpired, he appeared headed toward the victory. 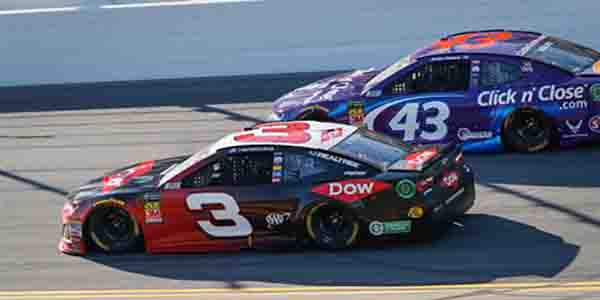 As the lead pack approached Turn 3, Dillion – with a considerable aerodynamic push from the No. 43 Click n’ Close Chevrolet of Darrell “Bubba” Wallace Jr. – made a run in his Dow-sponsored car for the front but was blocked by Almirola. Dillon kept going, tapping the rear bumper of Almirola, which sent the Ford into the wall. Dillon and Wallace continued on to the finish line, with Dillon winning by 0.260 seconds. Denny Hamlin (No. 11 FedEx Express Toyota), the 2016 Daytona 500 champion, finished third.

“I did what I had to do,” Dillon said. “He was trying to block me and I just turned him. We had a run and I stayed in the gas. It’s so awesome to take the No. 3 car back to victory lane. This one is for Dale Earnhardt and all those Earnhardt fans. We’re going to keep kicking butt for the rest of the year.”

Wallace lived his own emotional experience Sunday. His presence was steeped in storylines. Series rookie … returning a Richard Petty Motorsports car to Daytona 500 contention … first African-American in the Daytona 500 since Wendell Scott in 1969. And now, a runner-up in NASCAR’s biggest race. That is the best finish in the Daytona 500 by an African-American, besting the 13th-place finish by Scott in 1966. And there’s more to Wallace’s story: he got a surprise pre-race vote of confidence via a phone call from baseball hall of famer Hank Aaron.

“I have so many emotions going on right now,” Wallace said. “Thank you to ‘The King’ (Petty) for giving me this opportunity.” 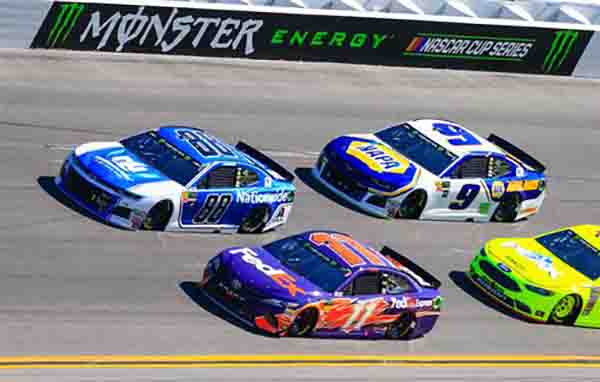 Attrition was the name of this Daytona 500 game, with a series of incidents that took out high-profile contenders. As those drivers were dropping out with stunning regularity during the sun-splashed afternoon, Dillon hung around – and hung tough.

At day’s end, the 27-year-old who was a wide-eyed seven-year-old in Gatorade Victory Lane when Earnhardt won, had his own piece of Daytona 500 history. 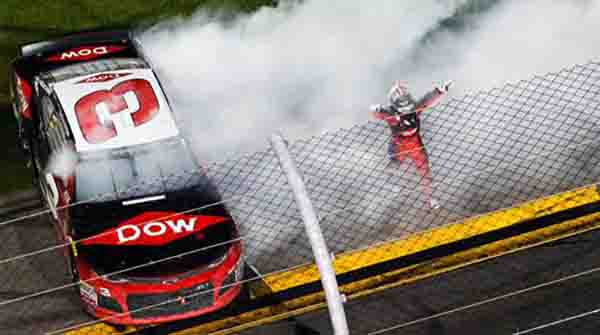 The 500 was run in three stages over its 200-lap/500-mile distance on the 2.5-mile, high-banked DIS tri-oval. In NASCAR’s stage-racing format, valuable extra points that count in the season-long series championship battle are awarded to the top-10 finishers in each of the first two stages. The first two stages were each 60 laps while the third was 80 laps.

Defending Daytona 500 champion Kurt Busch (No. 41 Haas Automation/Monster Energy Ford) won the first stage which was bookended by significant developments. During the race’s first caution period, Hamlin was penalized one lap for pitting outside his box, giving him a hill to climb the rest of the day. On the stage’s final lap a nine-car backstretch incident ruined the hopes of several contenders including two-time race champion Jimmie Johnson (No. 48 Lowe’s for Pros Chevrolet). Also, former Monster Energy champion Kyle Busch (No. 18 M&M’s Toyota) crashed on Lap 51 in Turn 3, necessitating an extensive pit shop for repairs.

Stage 2 was won by Ryan Blaney (No. 12 Menards/Peak Ford), Blaney led 48 of the stage’s 60 laps, including the last 22 laps. He was among the drivers involved in the Lap 199 mishap, but rebounded to finish seventh. 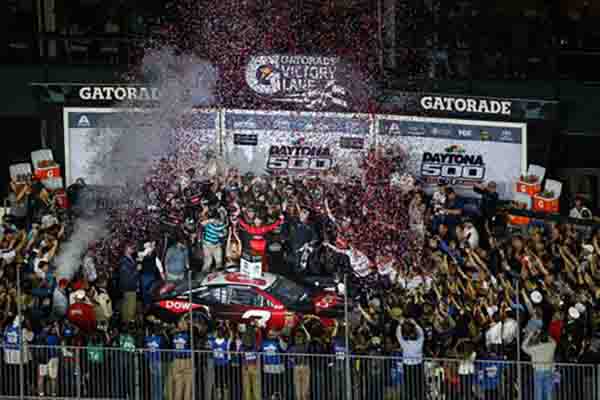 Racing in NASCAR for the final time, Danica Patrick (No. 7 GoDaddy Chevrolet) started strongly but ended up 35th after her involvement in a dramatic Turn 3 crash on Lap 102. The accident started when Chase Elliott (No. 9 NAPA Auto Parts Chevrolet), one of the pre-race favorites, slammed into the Turn 4 wall after contact with Brad Keselowski (No. 2 Discount Tire Ford). The incident also ended the day for 2007 Daytona 500 champion Kevin Harvick (No. 4 Jimmy John’s Ford).

The magic of Sunday night carried over to Monday morning at Daytona International Speedway, with 2018 Daytona 500 champion Austin Dillon honored at the annual Champion’s Breakfast in the speedway’s Bill France Room. 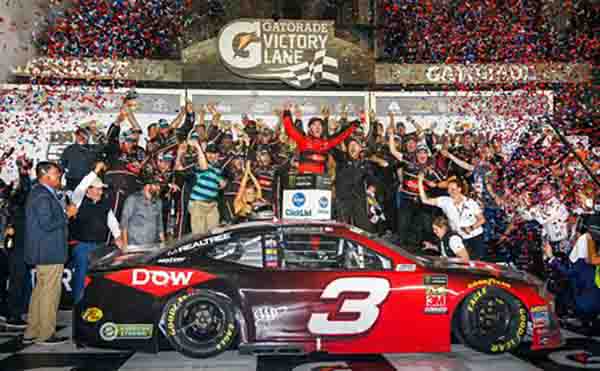 Wile and Dillon also unveiled the new logo for the 2019 Daytona 500.

On Sunday night after his victory, Dillon placed one foot and both hands in cement and signed his name on the square that will be added to the Daytona 500 Champion’s Walk of Fame outside the Ticket and Tours Building in July.

“I got 500 text messages last night,” Dillon said. “Haven’t looked through them all but I’m going to savor every moment of that.” 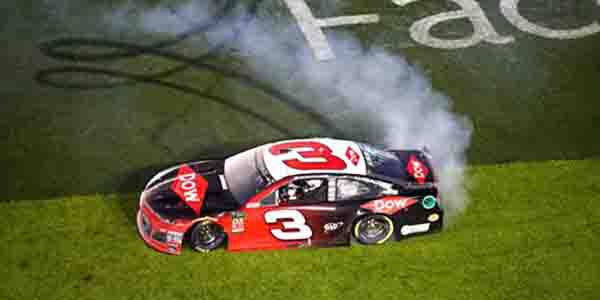 Dillon will be in New York on Tuesday for the traditional high-profile Daytona 500 champion’s media tour. On the docket: Live with Kelly, First Things First on FS1, FOX Business, SiriusXM and a visit to the New York Stock Exchange.

Then, it’ll be back to racing. The Monster Energy Series moves on to Atlanta Motor Speedway this weekend.

Motorsports action resumes at Daytona International Speedway on March 10 with the Daytona Monster Energy AMA Supercross, an FIM World Championship. That event will open the 77th annual Bike Week At Daytona which also includes the Daytona TT on March 15 and the historic, 77th annual Daytona 200 on March 17.