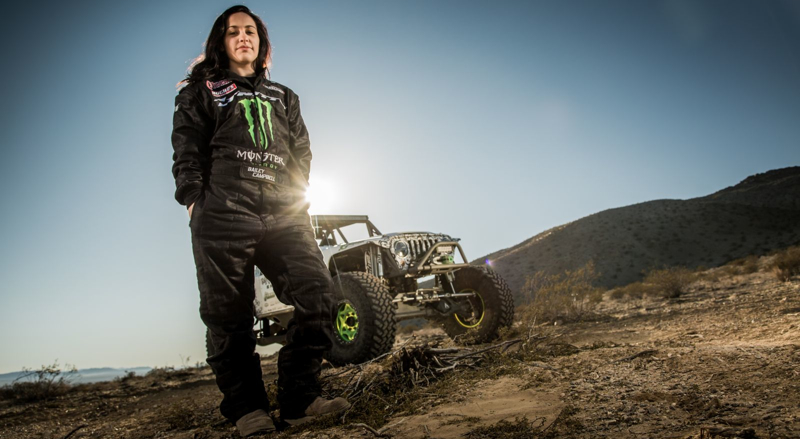 Team Nitto driver Bailey Campbell has become the first female diver to ever complete the King of the Hammers race, and did so with a Top 5 finish on February 5th, 2016 in Johnson Valley, California.

There are few off-road races in the world that can compare to what the King of the Hammers race puts its drivers through. One moment drivers are screaming across the desert at nearly 100 mph and the next they are picking their way through technical rock crawls with names like “Boulderdash,” “Wrecking Ball,” and “Chocolate Thunder.” This year’s race marked the 10th running of the Hammers but also a major first in the race’s history – the first time a female driver finished in the elite 4400 class. Bailey Campbell, daughter of Off-Road Motorsports Hall of Fame inductee and two-time King of the Hammers winner Shannon Campbell, finished the race in fifth place, just minutes behind her father, whom she had been running neck and neck with all throughout the eight hour race.

Bailey Campbell has been around off-road racing and rock crawling all of her life. From the time she was able to work a steering wheel, her father had her in the driver’s seat. By the time she was 17 years old Bailey had started her racing career in the W.E. Rock Crawling Series where she finished in third place her first time out. From there she progressed into the Dirt Riot Series in 2014. In the Dirt Riot Series, she got her first podium with her dad as co-driver and eventually finished 5th in the season points. It was that year that she also got her first taste of the big leagues in Ultra4 racing. By 2015 she had become the youngest and only female to ever race in the King of the Hammers. Now, at 19 years old, she has become the first female driver to finish in the Top 5 in that race – an amazing achievement for anyone of her age.

“We couldn’t be more proud of Bailey,” said Chris Corbett, Nitto Tire U.S.A.’s Events and Motorsports Manager. “Over the past three years, she has really come into her own as a driver – working her way up into the Ultra4 series and now to her Top 5 finish at King of the Hammers. We are excited to see where her Nitto Tires are going to take her next.”