Barrett-Jackson and Shelby American have teamed up to build a 50th Anniversary Shelby Super Snake in the DIY Pavilion presented by Tub O’ Towels during the 10th Annual Las Vegas Auction, Oct. 19-21, 2017, at the Mandalay Bay Resort and Casino. This will be the first Super Snake built by Shelby American outside its Las Vegas facility, providing auction guests with the unique opportunity to see the muscle car manufactured by an assembly team including factory technicians and Craig Jackson.

“Carroll Shelby was a great friend to many of us at Barrett-Jackson,” said Craig Jackson, chairman and CEO of Barrett-Jackson. “While his presence is missed at our auctions, his spirit lives on in every car that rolls out of the Shelby American factory. I couldn’t think of a better way to honor his legacy than with an on-site build of a Shelby Super Snake Mustang. I’m personally excited about taking some time off the block to work alongside the Shelby team as part of this special Shelby Super Snake build.” 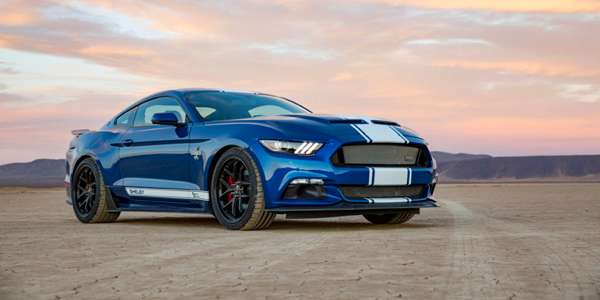 The 2017 Shelby Super Snake will be built in the DIY Pavilion presented by Tub O’ Towels, adjacent to the Future Events exhibit. The build process will follow the same production schedule that would be completed inside the Shelby American factory. It will start with the base Ford Mustang GT, which will be upgraded to a 750-horsepower muscle car with the integration of an upgraded track handling pack, supercharger and exhaust from Ford Performance, as well as 20-inch forged aluminum wheels and a Wilwood brake system. Shelby badges will be included throughout the vehicle and it will receive a special designation in the Official Shelby Registry as being built by Shelby American outside the Las Vegas factory.

The Shelby Super Snake will be built by certified Shelby American factory technicians, and will be supervised by Vince LaViolette, vice president of operations at Shelby American. Visitors to the Barrett-Jackson event will be able to observe the full build process throughout the three-day auction.

“We’re thrilled to team up with Barrett-Jackson on this Super Snake build at the Las Vegas Auction,” said Gary Patterson, president of Shelby American. “This is an exciting opportunity to peel back the curtain and let the world see the magic that goes into turning a Mustang GT into a 750-horsepower Shelby Super Snake. It will also be historic, as we’ve never completed a Super Snake build outside our Las Vegas facility and board member Aaron Shelby will wrench on the car. Carroll always said, ‘make history, then repeat it.’ This on-site build at the auction is an exciting opportunity to continue that philosophy.”

The 10th Annual Barrett-Jackson Las Vegas Auction will be broadcast on Discovery and Velocity, and internationally on Velocity Canada, Discovery UK and Discovery Turbo UK during the three-day auction.