Last weekend, drivers and crews prepared for the opening race of the 2014 Best In The Desert series, which launched the year’s desert racing season. The festivities and race took place in the town of Parker, Ariz. This race showcased the competition for the year, including drivers relying on BFGoodrich Tires and its unmatched support, such as BITD Overall 2013 Champion, Jason Voss.

Those drivers who raced with BFGoodrich Tires will have pushed a wide variety of tire designs to their limits. Racing three laps of the 150-mile course, the drivers, vehicles and tires covered a range of terrain types. From graded roads, sand washes to goat trails and rolling hills, the Parker 425 course poses the kind of punishment that these tires were designed to handle. 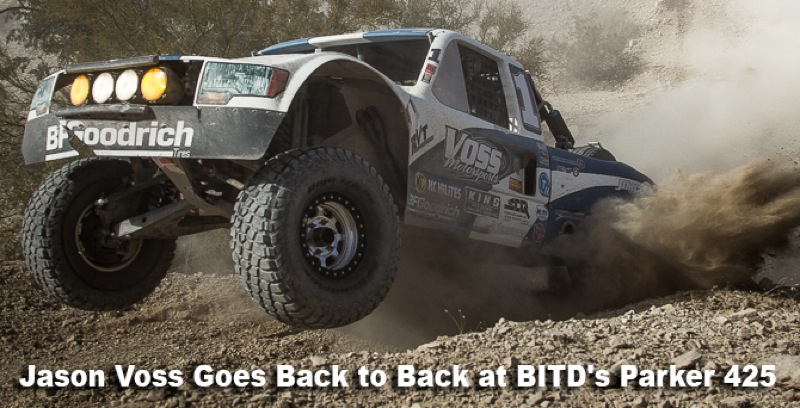 Along with the race there are other events that will take place prior to race day. Drivers from class 1400 and 1500 will be able to qualify for their starting position on Thursday morning. Following qualifying, drivers and the race vehicles will be in downtown Parker for the “Show & Shine” where locals, fans and teams can meet the drivers and gaze at the 800+ horsepower race vehicles. Fans will also get the opportunity to watch crews compete in the Pit Crew Challenge where they will go head to head to find the best pit crew at the Parker 425.

As the race season starts to go full swing, this year will be non-stop for BFGoodrich Tires and the support it brings to drivers running on the product.

“Every year our goal is to improve on the performance from the past year,” said Peter Calhoun, motorsports marketing manager, BFGoodrich Tires. “We pride ourselves on being the tire of choice for racers looking for the toughness and reliability needed to succeed in the desert. We are up to the task to again drive champions in 2014.”

The desert tires– For the BITD Parker 425, a number of teams chose to run BFGoodrich All-Terrain tires– and for good reason. The BFGoodrich All-Terrain T/A KO tire invented the all-terrain category and just like many off-road tires, used the Baja peninsula as a proving ground for its toughness and performance. Launched nearly 35 years ago, this tire claimed its first of many overall Baja 1000 wins in 1986 in an entry drivenby Mark McMillin and Ralph Paxton. That started a run that witnessed the BFGoodrich Tires Company claiming 20 consecutive overall Baja 1000 titles.

Additionally at the end of the 2013 season, BFGoodrich Tires continued to refine and develop its unmatched desert racing tire. What began as a developmental tire run at the Tecate SCORE Baja 500 was unveiled widely on several entries at the Baja 1000. This new BFGoodrich Baja T/A KR2 is a ‘pure racing’ product building on the success of the previous lines.