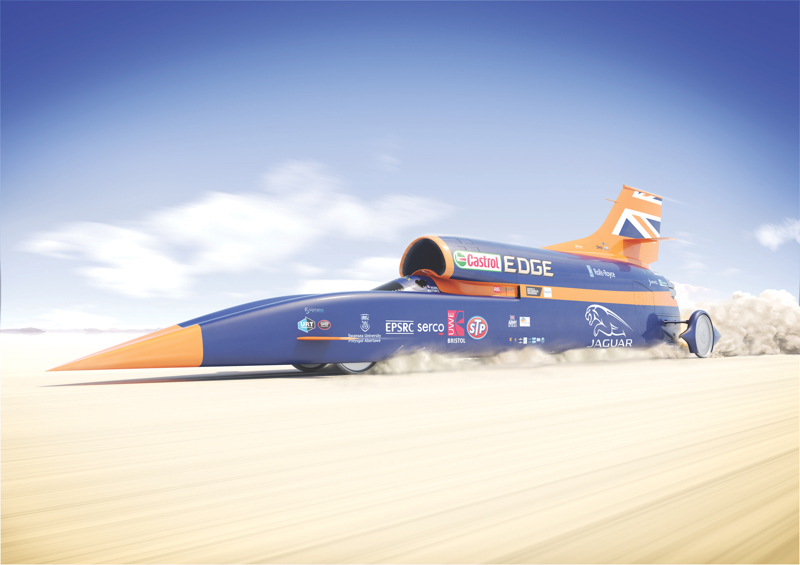 The famous Bloodhound SSC (Supersonic Car) will make its world debut on November 17th 2015 with a 200 mph trial at Newquay Aerohub, Cornwall.

The car will then be fitted with airbrakes and winglets ready to commence high-speed testing in Hakskeen Pan, South Africa, in Summer 2016, when weather conditions will be optimal. A forward party will deploy in April / May next year to prepare the team’s desert base.

The results from the Summer 2016 tests will inform the Project’s ultimate speed goal of setting a new World Land Speed Record of 1,000 mph.

Further details on the configuration of the car will be announced in August, when Bloodhound SSC will be shown in highly assembled form at the Team’s Technical Centre, Avonmouth.

The Bloodhound Project is now one of the world’s biggest STEM engagement programmes (Science, Technology Engineering and Mathematics), with approx. 100,000 children per year enjoying Bloodhound activities and lessons in the UK alone. The SSC is currently being assembled at the Bloodhound Technical Centre in Bristol, UK.

The Bloodhound has three sources of power, a Rolls-Royce EJ200 jet from a Eurofighter Typhoon, a cluster of Nammo hybrid rockets and a 550 bhp Supercharged Jaguar V8 engine that drives the rocket oxidiser pump. Between them they generate 135,000 thrust hp, equivalent to 180 F1 cars.

Over 280 global companies, 200 of them SMEs, are involved in the Project, which has become a showcase for science and engineering capability.