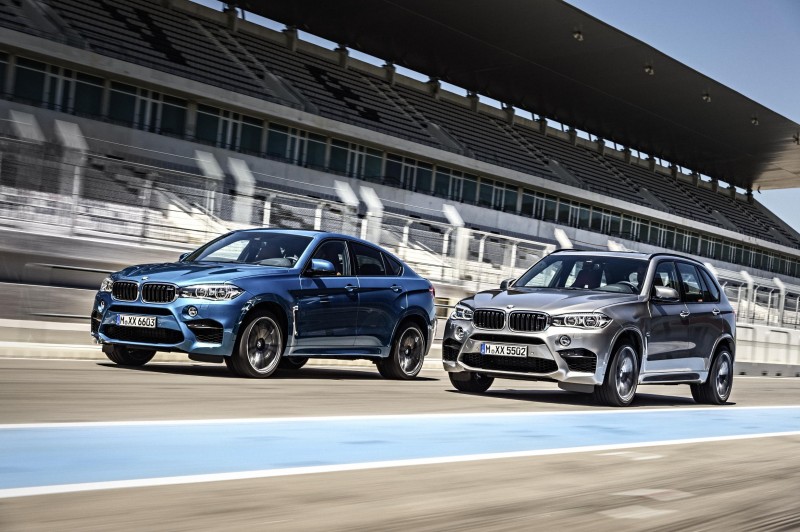 The new BMW X5 M and BMW X6 M will make their world debuts and the BMW 2 Series Convertible and BMW X6 Sports Activity Coupe will make their North American auto show debuts at the 2014 Los Angeles Auto Show on Wednesday, November 19th at the BMW Stand from 1:10 p.m. – 1:35 p.m. PST at the Los Angeles Convention Center (1201 South Figueroa Street).  English and native Spanish-speaking BMW representatives will be available for interviews throughout the day, as well as on Thursday, November 20.  In addition, BMW will feature the BMW Concept X5 eDrive, the plug-in hybrid high-performance BMW i8, all-electric BMW i3, BMW X4 Sports Activity Coupe, BMW M4 Coupe, BMW M6 Gran Coupe, and other BMW vehicles at the BMW Stand.

Making their world debuts together in Los Angeles, the all-new BMW X5 M and BMW X6 M combine the robustness, agility, and everyday use characteristics of the successful BMW X family with the commitment to high performance that defines BMW M vehicles.  Purpose-designed for exceptional driving experiences, the latest generation of high-performance all-wheel-drive vehicles from BMW M delivers boosted output, optimized suspension technology, and new heights of luxury and innovation in the equipment range.  The BMW X5 M and BMW X6 M raise the bar in terms of dynamics, steering precision, and braking performance, while fuel consumption and carbon dioxide emissions are significantly lower than previous models. The perfectly tuned package of engine, powertrain, and suspension, both models are equipped with the V8 unit with M TwinPower Turbo technology that delivers a maximum of 567 horsepower and 553 lb-ft of torque.  The standard eight-speed M Steptronic transmission with Drivelogic accelerates from 0 to 60 mph in 4.0 seconds.  The BMW X5 M will be offered at a base MSRP of $99,650 and the BMW X6 M will start at $103,050, including $950 destination and handling.  BMW X5 M and BMW X6 M Press Kit.

The new BMW X6 Sports Activity Coupe, BMW’s second generation of the Sports Activity Coupe, comes with a suitably exclusive roster of standard equipment that goes well beyond the previous model: Xenon headlights, 19-inch light-alloy wheels, automatic tailgate operation and the 8-speed Steptronic Sport Automatic transmission with steering wheel shift paddles included, as are leather trim, two-zone climate control, auto-dimming interior and exterior mirrors and the Dynamic Digital Instrument Cluster. The BMW X6 is offered in the U.S. in two powertrain variants, with the BMW X6 xDrive 35i using an in-line six-cylinder gasoline engine with BMW TwinPower Turbo technology and 300 horsepower and the BMW X6 xDrive 50i presenting the latest-generation V8 gasoline engine and 445 horsepower. Both models will come with BMW xDrive, the company’s intelligent all-wheel drive system. Cutting fuel consumption by up to 22 percent compared to its predecessor, the BMW X6 will be produced exclusively at the company’s production facility in Spartanburg, South Carolina, and will arrive in US showrooms in late 2014.  Pricing for the X6 xDrive 35i will start at $62,850, and the X6 xDrive50i will start at $73,850, both including $950 destination and handling.BMW X6 Press Kit.

In the BMW Concept X5 eDrive, the innovative EfficientDynamics drive technology BMW eDrive and the intelligent all-wheel drive system BMW xDrive are united for the first time, creating the world’s first plug-in hybrid Sports Activity Vehicle. The combination of a BMW TwinPower Turbo 4-cylinder combustion engine and a 95-horsepower electric motor provides typical BMW performance, with BMW xDrive further increasing the dynamics. At the same time, this powertrain is impressively efficient. It has an average fuel efficiency of approximately 62 mpg, which is unrivalled among vehicles in this class, with CO2 emissions of less than 90 grams per kilometer also setting new standards. Via the driving dynamics control switch, different drive modes can be selected. In the fully electric mode, which is free from local emissions, a maximum range of 19 miles is possible – at speeds of up to 75 mph. The BMW Concept X5 eDrive obtains its electrical energy from a (lithium-ion) high-voltage battery, which is accommodated in a space-efficient manner under the flat luggage compartment floor. This means that the room in the vehicle can still be used flexibly, with an almost identical luggage space volume. The high-voltage battery can be charged quickly and conveniently using the BMW home charging station. Alternatively, it can be replenished using any standard household power outlet or at a public charging station. BMW Concept X5 eDrive Press Kit.

The BMW i8 is the world’s first plug-in hybrid 2+2 sports-car from BMW Group.  Itjoins BMW i’s growing lineup of visionary vehicles which are purpose built from the ground up as electric and hybrid electric and constructed primarily from lightweight carbon fiber. Currently in showrooms and priced at $135,700, the BMW i8 features an athletic design and a sleek, low slung exterior and operates with extremely low fuel consumption (94 mpg) and emissions output. It is capable of accelerating from 0 to 60 mph in 4.2 seconds on the way to an electronically governed top speed of 155 mph. BMW i8 Press Kit.

The BMW i3 is the first fully electric vehicle from BMW Group under BMW i’s growing lineup of visionary concept vehicles constructed from the ground up primarily from lightweight carbon fiber. With 170 horsepower and 184 lb-ft of torque hybrid-synchronous electric motor, the BMW i3 is electrified by a 22-kWh lithium-ion battery, good for approximately 80 miles of emission-free driving. The BMW i3 offers interior space comparable to the legendary BMW 3 Series on a shorter overall body. Its 32.3-foot turning circle and a relatively long wheelbase make it agile and engaging to drive, yet ideally suited to driving in dense urban areas. Currently in showrooms, the BMW i3 has a base MSRP of $41,350 and the range-extender model will have a starting MSRP of $45,200. BMW i3 Press Kit.

In addition, from the Los Angeles Auto Show, BMW will announce a new app integration involving a leading multi-national music and technology company that will enhance the driving experience for BMW drivers.

Also, Uwe Higgen, Head of BMW Group Technology Office USA, will participate in a panel discussion entitled“OEMs Speak Out” at the Connected Car Expo at the Los Angeles Auto Show on Tuesday, November 18 at 1:45 p.m. The conversation will present leading auto futurists who will describe their vision of what automakers are planning for the short term and distant future as well as what the future of the connected car may hold.

BMW also will participate in the Green & Advanced Technology Ride & Drive event on Thursday, November 20 from 9:30 a.m. to 3:30 p.m. at the Gilbert Lindsay Plaza, with the BMW i3 available for test drives.

Further, the BMW i3 has been named a finalist for Green Car Journal’s 2015 Green Car of the Year award.  The award winner will be announced at Green Car Journal press conference on November 20 during the Los Angeles Auto Show’s media days.