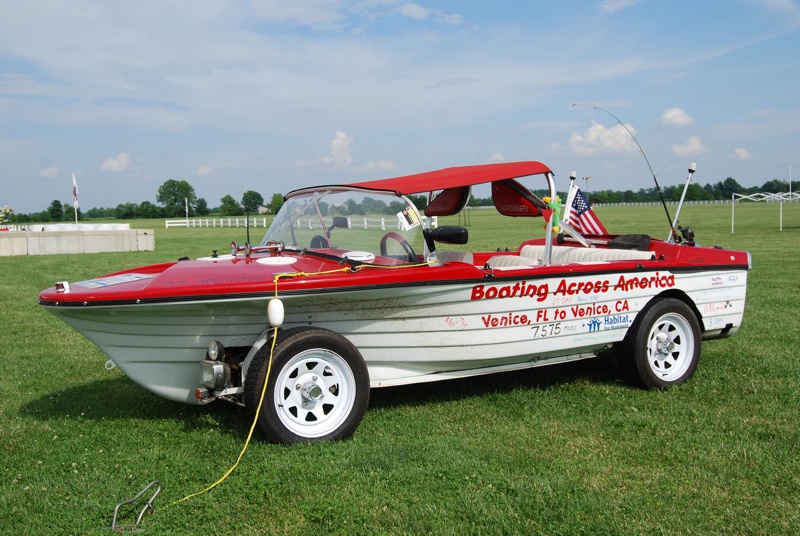 We’ve all heard the stories about Volkswagens with completely sealed doors that could float in water. We don’t know if the “Boatswagen” can float, too, but it sure has that fish-out-of-water look when you see it driving up the road.

The Boatswagen mates an Arkansas Traveler boat (sold by Sears, Roebuck) from the mid-‘50s with a 1972 Volkswagen Standard 1600 Beetle platform. The vehicle was originally built about a decade ago. Bruce (Captain Buzz) Lebenon of Venice, Fla., bought the car/boat and made many changes to it to prepare it for a cross-country jog.

Lebenon planned to drive the Boatswagen from Venice, Fla., to Venice, Calif., and back again. The purpose of the trip was to make people aware of his favorite charity—Habitat for Humanity. By the time he had the details worked out, he had switched to a 1776cc engine with dual carburetors. 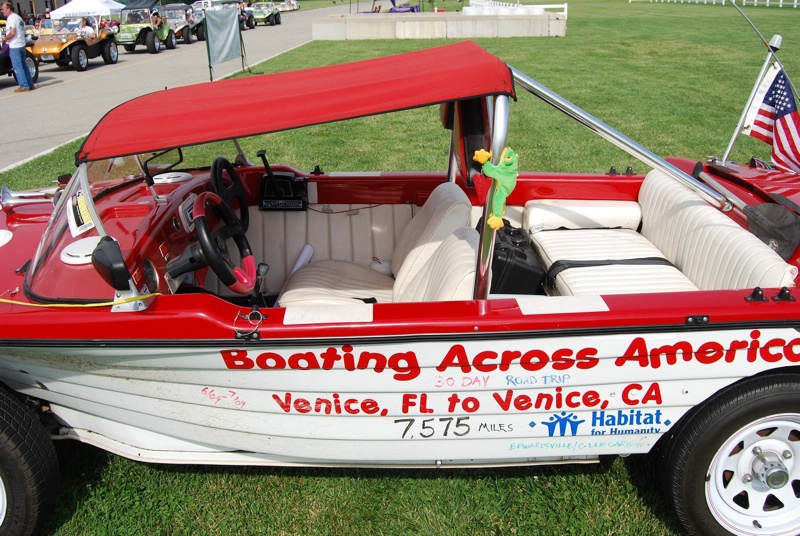 Lebenon traveled about 250-300 miles per day and took a month to complete his journey. He entered the Boatswagen in car shows as he crossed America and even picked up a “Most Unique” trophy at the Rimco Volkswagen car show in California. His return trip took a route along the iconic Route 66. The trip was updated daily on Bruce’s blog at www.boatingacrossamerica.com.

Stan Pontius became the boat-car’s next owner. He was looking for an unusual Volkswagen. He had owned many variants from Baja Bug’s to dune buggies. Now, he wanted a different type of Volkswagen to promoted his wife’s real estate business and her charities. When he saw the car on eBbay he knew it was just what he was looking for. He placed a bid five seconds before the end of the auction and won the Boatswagen. Then, he went to pick it up from “Captain Buzz” in Sarasota, Fla. Over lunch the two talked about Volkswagens and the Captain’s adventures with the Boatswagen. 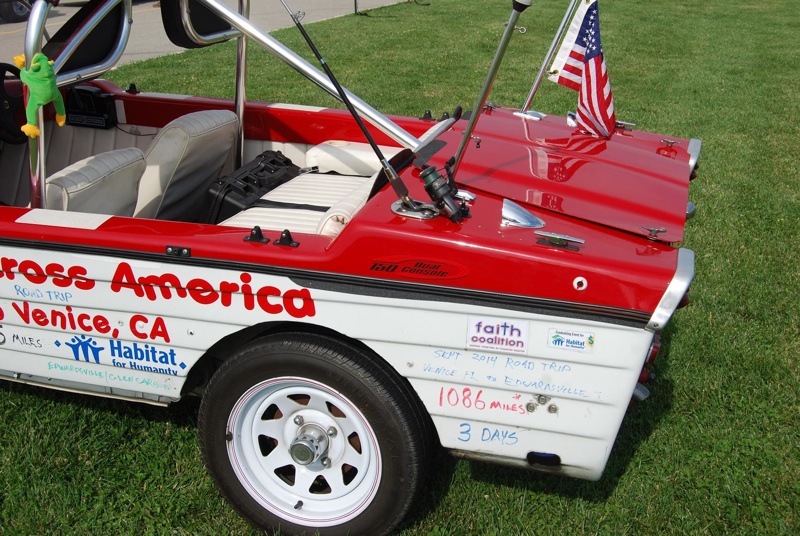 Bringing the car home was also an adventure. Everywhere Stan drove the car, crowds gathered around it. There were varied weather conditions to deal with and on the second day, he noticed a lack of power, then some popping through the carbs. He was 1,000 miles from his home in St. Louis, Mo. Ed Durden, an ex-dirt track racer who owned a transmission shop was towing an empty trailer and offered to tow the Boatswagen to Nashville, Tenn.

Durden was quite knowledgeable about cars and determined that the Boatswagen had good spark and was getting fuel to all cylinders. However, one cylinder was not firing and probably lost compression or overheated. Stan figured the last 400 miles to home was going to cost him lots of money. Then, Durden came into the breakfast area of the hotel and said he was worried about the situation. He then called his shop manager and said he would be gone the next few days towing a car to St. Louis!

In the end the car got to its new home two days ahead of schedule. Stan’s wife told Ed that he was the greatest man on earth. Stan determined that the Boatswagen’s number two cylinder had no compression. Luckily, he had a replacement long block sitting in the shop. A transplant was performed and with the turn of the key the boat-car came back to life. Some carb tuning was also needed before the Boatswagen was ready to sail again. Recently, the car was a big hit at the Air-Cooled Volkswagen Funfest in Effingham, Ill.