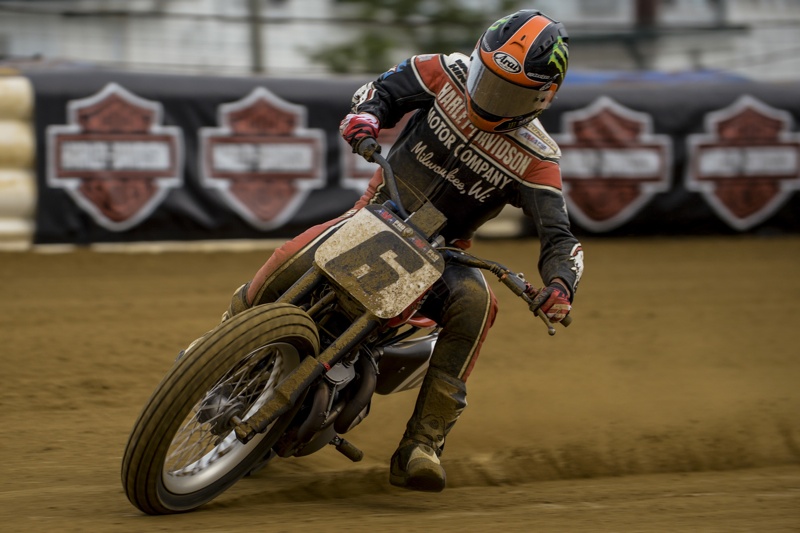 “The Factory Harley-Davidson had the power to get to the line first,” said Baker, the 2013 Grand National champion. “I’d been trying a smoother high-low line through the turns and knew it would work because it would give me better drive up the straight. Mees made a move to try and break my draft but that set me up perfectly to get past him. It’s really exciting to get my first mile win on this historic track.”

The Indy Mile results reset the GNC1 standings. Mees, who has not yet won this season on the Rogers Racing Las Vegas H-D/Blue Springs H-D Harley-Davidson XR750 motorcycle, leads the GNC1 series after seven of 16 races with 113 points. Smith moves up to second place with 105 points as Sammy Halbert slips to third place with 100 points. Baker moves from fifth to fourth place with 99 points, as only 14 points now separate the top four racers.

Mees hung on to the points lead and salvaged his evening after he failed to qualify for the main in his heat race. With severe weather lurking in the area, the race schedule was compressed and there were no semi-final heats run, so Mees used his provisional card and started the 25-lap main from the last row on a back-up motorcycle. Mees raced his way to the front of the pack, where he joined Smith, Baker and Harley-Davidson® Screamin’ Eagle® Wrecking Crew rider Kenny Coolbeth Jr. The race was stopped three times for downed riders, the last red flag coming with nine laps left in the race.

“Sometimes a red flag can ruin your rhythm or momentum, but that last one helped me tonight,” said Baker, who has now won two of the last three GNC1 races. “I got a fresh helmet with new tear-offs and had some time to consider my strategy for the end of the race, which is not always easy to do at 140 mph. On those last laps, we were all sort of playing mind games, waiting to show our hand at the end. The bike is great and I’m feeling pumped as we are in the hunt for the championship.”