Well, it’s now official- what has been speculated for the better part of two weeks has finally happened; Jeremy Clarkson’s twenty plus year run on one of the most prolific automotive television programs of all time has finally come to an end.

“A line has been crossed. I cannot condone what has happened on this occasion.”

After an investigation by the BBC definitively confirmed that Clarkson did indeed attack or attempted to attack producer Oisin Tymon, which included throwing a punch and allegedly insulting the producer’s Irish nationality with a stream of derogatory expletives, the decision was made to relieve Clarkson from his duties as Top Gear host.

With five million viewers in Britain alone and 75 million dollars worth of revenue for the BBC, Top Gear is arguably one of the most well-received successful shows the network has to offer right now. So, without much surprise, the network has stated a commitment to continue the show and plans to renew for 2016. However, they did admit in a statement that it would be challenging.

James May and Richard Hammond’s contracts are up this year, and whether or not they will resign is still up in the air; it has been confirmed that these negotiations have been delayed as a result of Clarkson’s departure.

A full statement on the decision and its impact, sourced from the BBC’s Twitter page, can be read below. 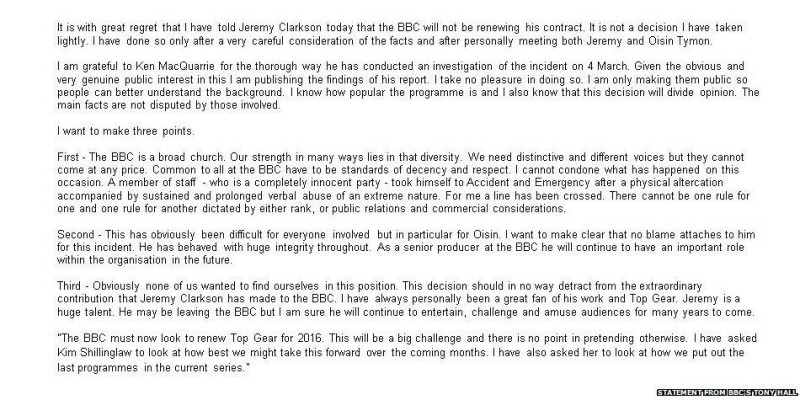