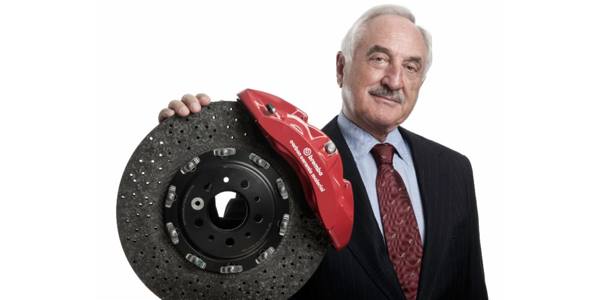 Alberto Bombassei continues to be a vital asset in Brembo’s growth from a small family firm in Bergamo, Italy into a worldwide leader in automotive braking systems. Brembo was founded by Alberto’s father, Emilio Bombassei, and his uncle Italo Breda. Alberto has served in various roles at Brembo since 1961, and has led the company’s expansion and research efforts resulting in breakthroughs like the design and production of the first aluminum calipers, which were adopted by manufacturers like BMW, FCA, Ferrari, Ford, General Motors, Mercedes and Porsche.
“I am very thankful to the committee who nominated me for this great honor,” Alberto Bombassei commented. “This recognition makes me very proud and I want to share it with all the Brembo employees who, for over 50 years, have helped our unique products to become known and used globally on the world’s most prestigious vehicles.  I am extremely happy to be part of this prestigious list of those who, like me, have dedicated their lives to the automotive industry. The entire Brembo community will be honored with me as we continue to pursue a continuous commitment to excellence, and to making our company one of the strongest ambassadors of “Made in Italy” products throughout the world”.
The prestigious honor will be bestowed in a ceremony to be held this July in Detroit. The Automotive Hall of Fame (AHF), which is based in Dearborn, Michigan, was founded in New York in 1939 in order to celebrate and tell the stories of those who have been able to achieve extraordinary goals in the automobile industry.
After almost 80 years of existence, the AHF has inducted some 800 individuals into the Hall of Fame. As the ninth Italian inductee, Alberto Bombassei, will join other influential automotive executives like Henry Ford (1967), Ferdinand Porsche (1987), Soichiro Honda (1989), Andre Citroen (1998), Dale Earnhardt (2006), Roger Penske (2015) as well as Italian automotive icons from the present and the past such as Enzo Ferrari (2000), Ettore Bugatti (2000), Giovanni Agnelli (2002), Giorgetto Giugiaro (2002), Battista “Pinin” Farina (2004), Nuccio Bertone (2006), Sergio Pininfarina (2007) and Luca Cordero di Montezemolo (2017).
Show Full Article