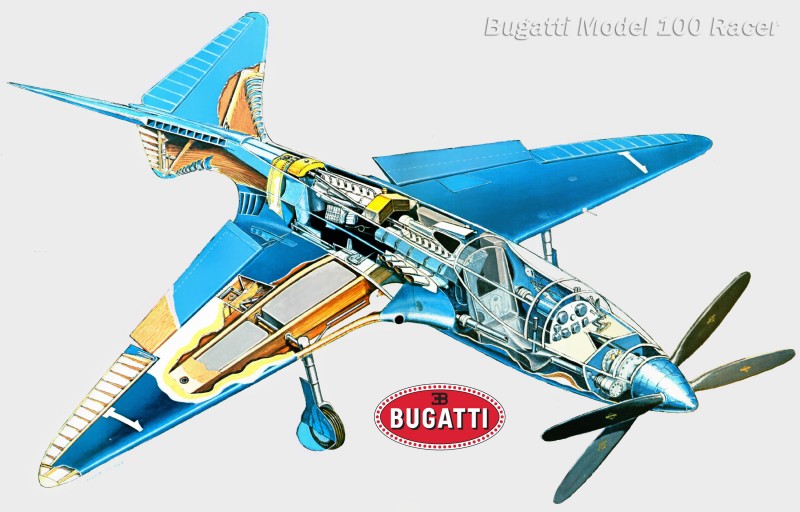 Ettore Bugatti is mostly known for building racers and performance cars that broke records and won races all over the world. However, the Alsatian manufacturer also manufactured an airplane, the Model 100, retrospectively touted as “the Veyron of the Skies.” Powered by two Bugatti straight 8 racing engines, the plane was the fastest of its day, producing 900 horsepower to be capable of attaining a top airspeed of 550 mph.

The Model 100 was conceived with the aim of competing in the 1939 Coupe Deutsche, which was one of the most prominent air races of the day, attracting all of the top German manufacturers. Owing to national pride, Bugatti wanted to outdo his German counterparts with a showing of French engineering and technology.

Bugatti teamed up with French engineer Louis de Monge in 1938 with the aim of constructing the fastest plane known to the world at that time. For power, the Model 100 employed two 4.9 liter 450 horsepower Bugatti straight 8 racing engines. Both engines were mounted one behind the other, just to the rear of the cockpit.

The Model 100 had a total wingspan of 27 feet and a length of 25.5 feet. It was constructed of a laminate plywood frame that interspersed balsa and hardwood materials, to facilitate a construction that was as lightweight as possible.

Bugatti and Monge worked fervently to complete the plane by September of 1939 but came up short by mere weeks and were thus unable to race the plane on the intended date. With the plane almost complete, production was further forestalled by the onset of World War II, precipitated by the German invasion of France. This then left Bugatti in the quandary of what to do with the Model 100, which was quite probably the fastest plane in the world; the calculations suggest that the Model 100 could have attained a top speed of 550 mph, while the standing air speed record belonged to a German Messerschmidt at 469 mph.

Many contend that, if the Model 100 had fallen into German hands, it could have shot the opposing Allied aircraft, such as the Spitfire and Hurricane, out of the skies. However, this may be up for debate, as a wood fighter may not have been able to hold its own against its more heavily armored adversaries.

Regardless, Ettore Bugatti still feared that the Nazis may have captured the Model 100 and used its technology in their own aircraft or adapted the Model 100 for military use. Though once a German citizen, Bugatti had become an ardent anti-German in his later years. Consequently, he went to great lengths to hide the Type 100 from the Nazis, tucking it away in a secluded barn in the French countryside until after the war.

The Type 100 was rediscovered after the war and changed hands over and over again after Ettore Bugatti’s death in 1947. The plane finally found a permanent home in the EAA Airventure Museum  in Oshkosh Wisconsin, after spending some time at the National Museum of the United States Air Force; it is, of course, ironic that such a European craft ended up in America.

Despite being in nearly flight-worthy condition, the Type 100 never flew. With its distinctive blue exterior that screams ‘Bugatti’ and its oddly futuristic design, it serves as a staggering reminder of what might have been, had Ettore and his engineers worked a little bit more hastily.

Though the original Model 100 will never fly, a team of engineers, including both former US Air Force and Royal Air Force pilots, are constructing a full-scale and fully operational replica of the Model 100. After years of work, they plan on flying the plane soon.