Founded by Alfieri Maserati and two of his six brothers, Ettore and Ernesto, in Bologna on December 1, 1914, the eponymous car manufacturer now based in Modena is celebrating its centenary in 2014. A momentous year, that also sees Bulgari, an Italian jewelry and luxury goods brand, toast its 130th anniversary. As such, the two Italian firms have decided to mark this milestone year with a distinctive and exceptional sports watch: the Octo Maserati chronograph. 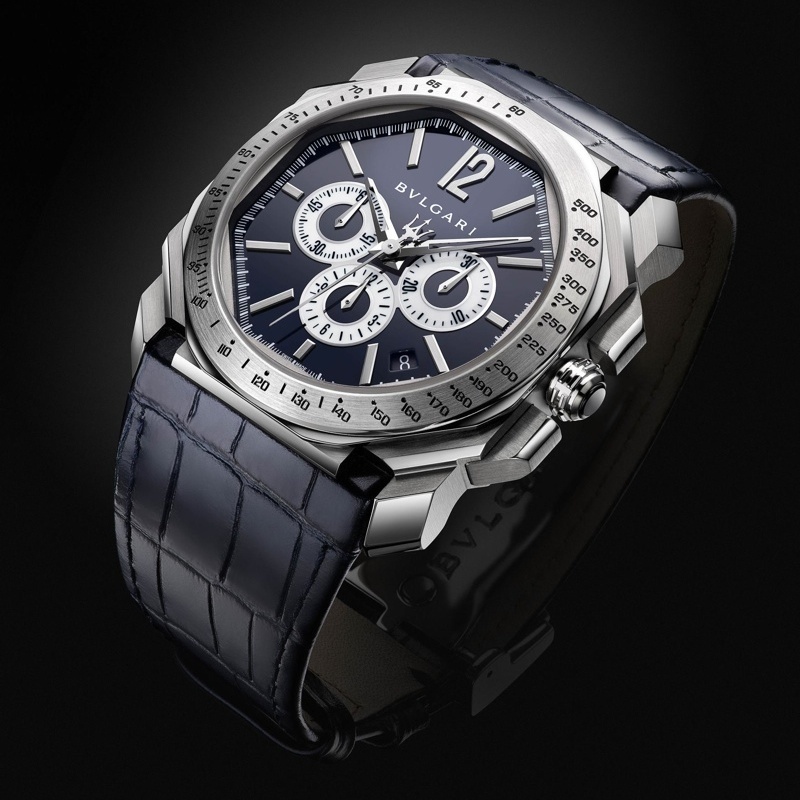 For this partnership that began in 2012 with the launch of the Octo Quadri-Retro Chronograph bearing the colors of the Italian carmaker, Bulgari has chosen this year to drive its chronograph by means of a movement that lives up to its name. Nicknamed Velocissimo, meaning “the fastest”, the self-winding chronograph movement, chosen by the Swiss master-watchmakers to power this limited series, is fitted with 45 jewels and distinguished by its extremely high frequency, at 36,000 vibrations per hour. Equipped with a silicon escapement and an oscillating pinion operating as a clutch to ensure that the chronograph is activated as precisely as a sequential gearbox, Calibre BVL 328 has a 50-hour power reserve guaranteeing a blend of performance, precision and autonomy. This powerful mechanism is equally well prepared for sudden bursts of speed as for long-haul races, just like the cars offered by Maserati.

The evocative nature of this timepiece is not confined to its technical aspects, since everything about the Octo Maserati, from the singular case design through to the case finishes, echoes the world of the car manufacturer. This is a fine example of fruitful cooperation and dialogue between the designers and engineers of the two Italian firms, amounting to far more than a mere partnership.

With its 41.5 mm diameter enabling comfortable dial read-off, the case of the Octo Maserati, which is water-resistant up to 100 meters, resonates the generous proportions and comfort of both historical and modern Maseratis. The two chronograph buttons handling stop/start and reset functions, respectively placed at 2 and 4 o’clock, are perfectly integrated on the case middle within its 110 facets, so as to form a single, homogenous whole. They provide an eloquent reminder that the Octo range is inspired by brilliant Italian accomplishments in the fields of architecture and design – as well as performance, as confirmed by the tachometric bezel. 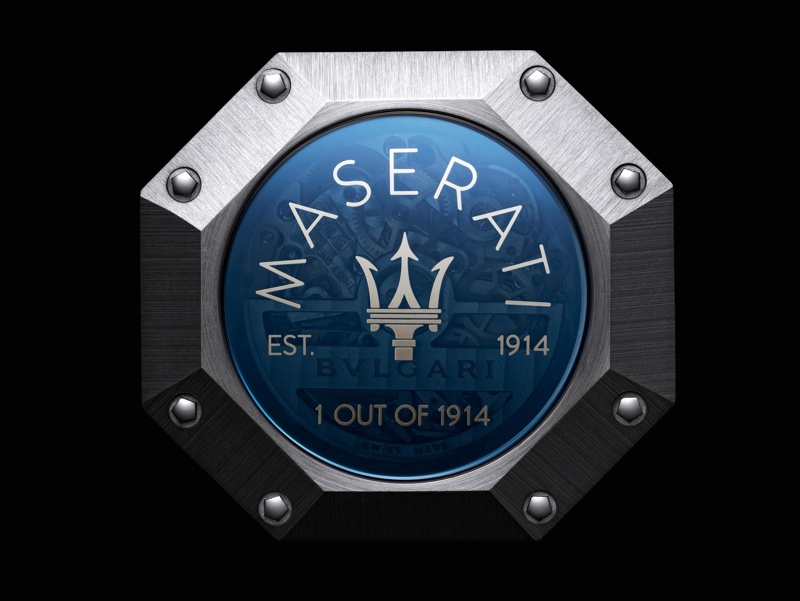 Octo Maserati provides readings as instantaneous as a car’s speedometers, displayed on a champlevé dial. Like the design and production of a Maserati, this production technique involves a long and complex process calling for perfect control, plenty of time, intense concentration and a large number of successive stages: from hollowing out the cavities that will hold the lacquer, to the firing phases and finishing of the shiny surfaces, as well as hand applying the varnish and polishing each surface. The final result is an elegant and eminently readable dial entirely in keeping with the spirit of the dashboards on the cars bearing the famous trident.

The latter emblem that has come to represent the car manufacturer was created by the artist in the family, Mario Maserati, and inspired by the famous Neptune fountain in Bologna. It tops the chronograph hand and discreetly appears on the semi-transparent blue case-back. The dial also features a luminous blue shade reflecting the carmaker’s iconic color.

The blue alligator leather strap, secured to the wrist by a double-blade steel folding clasp with a safety fastening, is as supple and refined as the upholstery of one of these desirable sports cars.

While each is exactly as its creators intended, each watch is as unique as each car. There will only be 1,914 Octo Maserati chronographs made in tribute to the founding year of Maserati.