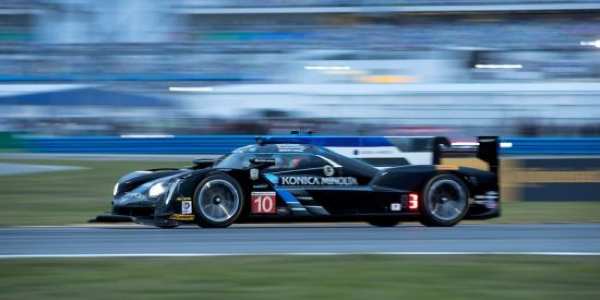 Twenty-four hours of racing came down to 10 minutes for the No. 10 Konica Minolta Cadillac DPi-V.R of Wayne Taylor Racing. Ricky Taylor made a move with just three laps of racing remaining to “finish the business” that his father started with Cadillac back in 2000 as the team won the IMSA WeatherTech SportsCar Championship 55th running of the Rolex 24 Hour At Daytona.

As the race progressed from early sunshine and 70 degrees Fahrenheit to rain and 45 degrees overnight, the Cadillac teams had to negotiate 52 other race cars on the track and Mother Nature. Just 20-minutes into the race, Ricky Taylor took the lead in the No. 10 Konica Minolta Cadillac. Since that time, the Wayne Taylor led team had only a few hiccups during the 24 hours, one for a fire bottle pit lane infraction and a few late on-track miscues. Other than those minor racing incidents, the No. 10 Cadillac DPi-V.R never came to the garage and only needed gas, oil, tires, and a fresh driver.

With 10-minutes remaining Ricky Taylor drove his Cadillac DPi-V.R to the apex of Turn 1 to make a pass on Albuquerque in the Mustang Sampling Cadillac. Taylor and Albuquerque touched, Abuquerque spun and Taylor went on to win the 55th running of the Rolex 24 Hour At Daytona.

At the finish, the Mustang Sampling Cadillac team of Barbosa, Christian Fittipaldi and Filipe Albuquerque finished second making it a Cadillac DPi-V.R one-two at the World Center of Racing. The second Action Express Racing entry, the No. 31 Whelen Engineering Cadillac DPi-V.R soldiered onto a sixth place finish. 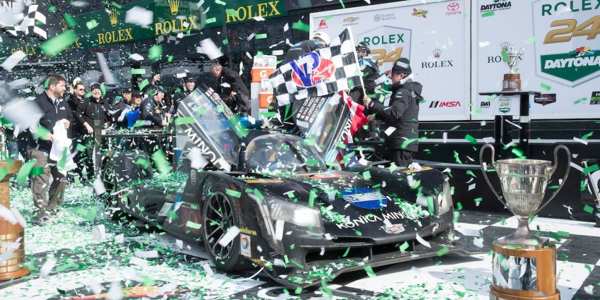 “Victory at the renowned Rolex 24 At Daytona is never easy. To do so in our debut, with a new car dominating the race, is a tribute to the efforts of our engineers, teams and drivers.”

“Cadillac’s return to endurance racing represents a tangible expression of our new product philosophy, in which technology and superlative engineering meet to challenge conventions and end the trade-off between luxury and performance.”

“It is hard to bring a brand back into racing. I was just over-the-moon to come down to Daytona for the first time and drive a brand new car, and a brand new chassis. Dallara did a great job with that chassis, and our engines were strong. ECR Engines really hit is out of the park with our new Cadillac 6.2L engine.

“It was one of those historic things. You are witnessing it in a historic place, and you are watching Jeff Gordon get into a prototype for the first time, and you watch him win it with Ricky and Jordan. You watch Max in his last race and watch him win it. Those are times you never forget, and that is what Daytona is all about. That is why this place is so special, because every time we come here for these races, special things happen.

“The battle was good. We had the good and the bad, and this weekend a lot of good. It was stuff we will never forget for the rest of our lives.”

“I was particularly happy for Wayne Taylor and his sons because we’ve come here and run hard and finished second in this race – this is a hard race to win. To come here for the first time, with all the things he has done for Cadillac and now in the DPI class to bring that back with a new manufacturer, he won it through his efforts. I really express my extreme joy and gratitude to him because I know how passionate he is and puts his whole life in it. And now his sons are in the

cars, so to watch them win it for us with our new car. To watch them convincingly win it was great.”

“Wonderful. I was speechless. What is better than this? I finished my career with a big win Jeff and the boys. I want to thank the Taylor family. He said I was the worst teammate, he really means it. This is a really special way to end my driving career.”

“It is unbelievable, I am still shaking. There are so many different story lines. The unfinished business of the first go around. Starting the season with a win. Cadillac’s fist win. Max has been a part of our family for years. We used to have class with Max the Axe. He would tell us about downforce and over taking. My pass today was just like Max. To win today was really cool. To win it with Jeff is surreal experience. The pass I was working on him we came to GT traffic and they didn’t look to good in Turn1. I thought about doing this for years and years. Drivers tend to release their hands a little in the break there and it opens up.”

“The past four years – and now five with this year – we’ve had flawless runs. We never went in the garage. We never lost a lap. It’s always been tires-fuel-driver. Thankfully we had another one of those days today. Unfortunately one of our guys who wasn’t with us today was someone had been with us for every one of those races – Adam Banet. He actually left Thursday morning because his wife had their first child. He was watching the race on TV though. It was kind of scary for all of us because he was the guy who wired the entire car. Any little glitch… he was our guy. Lots of people came together for us from some of our other partners. I know I was scared going into it with him not being here and not knowing what all he does for us. He designed the entire wiring loom for all the Cadillacs so it was a big deal. It was kind of sad he wasn’t here but he was definitely a big part of it.”

“Max and I drove for Cadillac back in 2000. It ended shortly after with unfinished business. Jeff, Jordan, Ricky and Max finished it for me today. Max and I were teammates for so many years, the worst I ever had. We won the IMSA championship in 2005 and he wins the 24 hour with my kids. Very special. I don’t know how anybody can top this, I really don’t.”

“This is unbelievable! I haven’t been this emotional for a win and an experience like this for a very long time. The reason is because I know what this means to this team, Wayne [Taylor], these kids [Ricky and Jordan] – Max. Oh my gosh! This is amazing! Daytona has always been special, but this one sent me over the top. I’m just blown away right now. When he told me about the Cadillac program, I was amazed. It is an amazing beautiful car with a lot of technology. To win in that car in a race like this is amazing.”