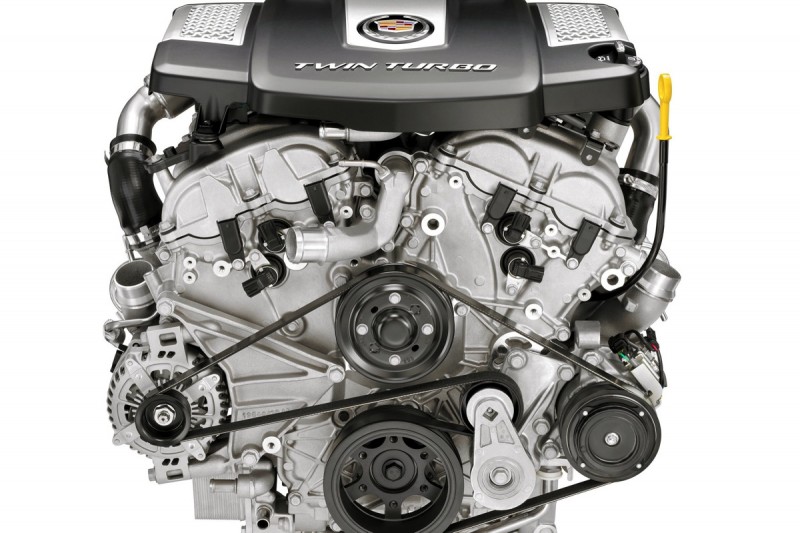 The Cadillac ATS aims to compete with cars such as the BMW M3 and the Mercedes C63 AMG. With such high competitors, the car also needs an engine to give it the necessary punch. This engine is GM’s 3.6 liter twin-turbo V6. Previously rated at 420 horsepower and 430 ft. lbs. of torque, we now have word that it’s been upgraded to 455 horsepower and 455 ft. lbs. of torque, amid a host of modifications and tuning.

Featuring GM’s latest in turbo technology that is intended to reduce lag as much as possible, the engine employs a twin-turbo setup. Two smaller turbochargers are employed, as opposed to one larger, centralized turbo; this allows for better spooling of the turbo at lower rpm ranges. GM also designed the system in such a manner as to minimize the path of the airflow though out the turbo system. This was done by mounting the inter-cooler much closer to the turbo system and employing a top mounted throttle body to reduce airflow. The smaller the path the air must travel, the more lag is reduced and the less boost pressure is lost. Chief engineer Richard Bartlett opines,

“By creating a very short path from the turbos to the throttle body, the compressors are able to draw air directly from the inlet box and send pressurized air through the inter-cooler immediately,”

In the latest round of modifications, the engineers at GM boosted the output of the engine from 420 horsepower to 455 horsepower. This was done by way of extensive tuning and modification to the fuel delivery system. Boost pressure was also increased to 18 psi. According to Bartlett,

“The high-tumble heads were developed with advanced modeling programs that helped us determine the optimal design in less time and with less trial and error… Literally hundreds of simulations were performed to optimize the port flow, injector spray angle and pattern, and piston topology to produce a highly efficient yet powerful combustion chamber.”

The engine also employs some of the most lightweight technology around. Titanium-aluminide turbines make the turbocharger unit as lightweight as possible, and titanium connecting rods are also employed. The engine will soon be paired with GM’s new eight speed automatic transmission, equipped with paddle shifters. The transmission is one of the most advanced in the world and achieves faster shift times than some of the best European dual-clutches.