Can-Am Maverick 1000R drivers finished first and second in the Open side-by-side class and overall at the 12 Hours of La Tuque endurance race in Quebec, Canada. Maverick pilots also swept the UTV Open class podium this past weekend at round three of the American Woods Racing Championship Series (AWRCS) in Pennsylvania.
“It was a great racing weekend for Can-Am and the Maverick 1000R. We posted a 1-2 finish in the extremely difficult 12 Hours of La Tuque with Can-Am X-Team drivers Martin Horik and Yani Desjardins and swept the AWRCS side-by-side class podium. We also had two great performances from our DS 450 racers at La Tuque,” said Jeff Leclerc, Racing Project Leader, Can-Am.
12 Hours of La Tuque
The 12 Hours of La Tuque is four-day event featuring vendors, concerts and endurance races for ATVs, motorcycles and side-by-side vehicles hosted in the Haute-Mauricie region near La Tuque, Quebec, Canada. The side-by-side competitors ran two separate one-hour sessions to determine the overall winner. Can-Am Maverick 1000R side-by-side racers had a very memorable 2014 12 Hours of La Tuque, taking first and second overall and in the Open 851-1000cc (SxS) class.
Martin Horik (OCTANE / Can-Am) completed a total of 69 laps over the two sessions in a time of 02:03:05.797 to put his Can-Am X-Team Maverick 1000R vehicle on top of the Open 851-1000cc class podium and the SxS overall. Horik completed 35 laps during the first session to take a very close second. However, in session two, he completed one more lap (34) than the competition to win the event. Can-Am X-Team Maverick pilot, Yani Desjardins, took second overall in the class. Desjardins, last year’s overall winner, won the first portion of the race, but took second in session two to earn second behind Horik.
“It was a tough race and tough track. It was a pristine track to start, but it got really rutted and whooped out,” said Horik. “The Maverick did great out there.”
Can-Am also earned a hard-fought podium finish in the ATV race. The Can-Am Elka PLX Sport team of Mathieu Deroy, Keven Vachon and Bobby Desjardins took second overall in the three-session ATV General race with a Can-Am DS 450. The team, which completed a total of 232 circuits over the three, four-hour sessions (including one at night), won the first session and was in the running for the overall until a mechanical issue slowed their pursuit during the final session. They finished in the top three in each session, but ended up eight laps behind the eventual winner and took second. Can-Am DS 450 racer Martin Lafontaine also won the Iron Man class (solo participant) and took ninth overall. He completed 196 laps during the 12 hours of racing to ensure him a top-10 finish. 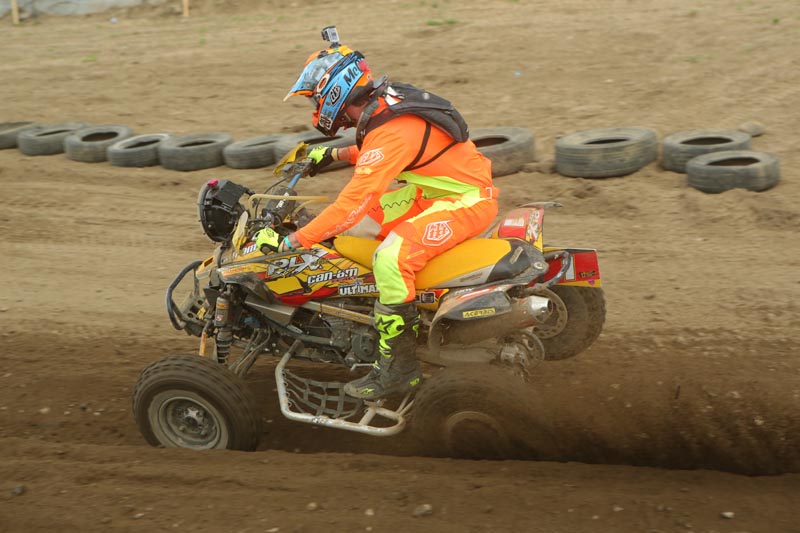 AWRCS – Round 3
Can-Am Maverick 1000R X xc side-by-side pilot Dave Plavi (Crash Addict / PARCS / Can-Am) lead every lap but one at round three of AWRCS in Red Bank, Pa. It was the first AWRCS UTV Open class and UTV overall win for Plavi, who started racing with a Maverick last year and was runner-up in the standings. The victory pushed Plavi to sixth in the current UTV Open class standings.
JB Racing / Can-Am racer Larry Hendershot, the defending AWRCS UTV Open class champion, and co-pilot Pat McGuire put in a good race to finish second in the class and overall. They took the lead on lap four, but Plavi regained the lead on the fifth-and-final-lap. The second-place finish was good to keep them out front of the class points lead heading into the next round. Jack’s Excavating / Can-Am Maverick driver Marcus Pratt finished third to make it an all Can-Am podium.
Show Full Article