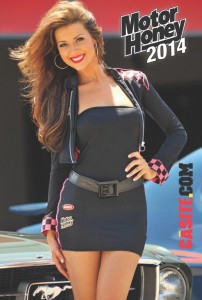 Casite, known for its Motor Honey brand, has announced the September and October winners in its “Show Me Your Motor Honey” Facebook promotion celebrating the company’s 90th anniversary. Each month, nine contestants are awarded a $90 Visa gift card and qualify for a chance to win the $9,000 grand prize.

To participate, contestants upload a photo of themselves, or a family member, friend, or pet (their “Motor Honeys”) with their “ride,” and winners are determined each month by Casite judges and votes from other contestants and their friends. Each of the monthly winners and the top 90 voted entries at the end of the promotion will qualify to win the $9,000 grand prize, which will be announced next week at AAPEX 2013 in Las Vegas.

Miss Motor Honey 2014, Susie Leica, is from Detroit and has worked as a model with several car companies including: Audi, Maserati, Cadillac, Toyota and Ferrari. Her modeling accolades include being named Michigan Model of the Week, walking the runways of New York during Bridal Fashion Week, and being featured in Ambassador Magazine, StyleLine Magazine, Real Detroit and Insider Weddings.