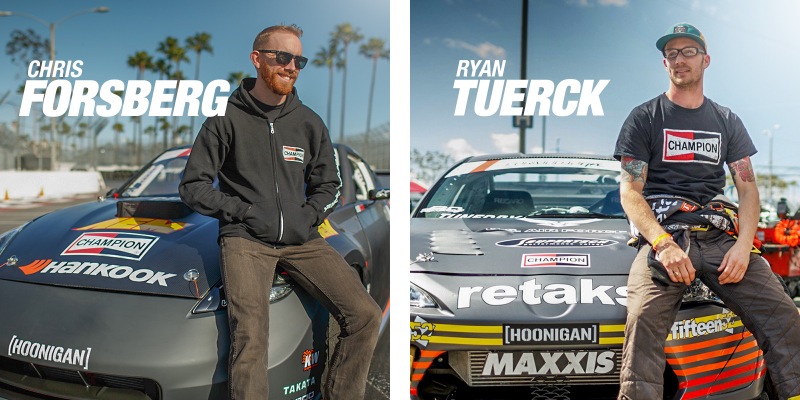 “Champion spark plugs have won thousands of races and series championships over the years, and we’re committed to achieving the same level of success in professional drifting competition,” said Jessica Wynn, global digital marketing manager, Federal-Mogul Vehicle Components segment. “We are pleased that our world-class brand and leading-edge technologies will have a major presence in the Formula Drift series and look forward to working closely with Chris and Ryan in pursuing our next championship.”

Forsberg, known among drifting enthusiasts as “The Force,” is one of the sport’s winningest drivers, with 12 event victories and the 2009 championship. He moved up from grassroots to professional competition with the establishment of the Formula Drift series in 2004. Forsberg drives the 800-horsepower No. 64 Hankook Tires / NOS Energy Drink Nissan 370Z.

Tuerck began his racing career in BMX and Motocross competition, earning his professional Motocross license at the age of 16. He finished second to Forsberg in series points in 2009 and has finished in the top 10 in five of seven Formula Drift seasons. Tuerck has been at the forefront of creating unique online automotive content with his popular YouTube series, “Tuerck’d,” and will be working with Champion to create more videos throughout the season.