A celebration of the rare and historic race car known as the Cheetah is scheduled for July, 17 – 20, 2014 at The Hawk Event at Road America in Elkhart Lake, Wisconsin. The 50th Anniversary Gathering will include the largest ever collection of Cheetahs in one location. Attendees will bring historic and modern Cheetahs for display and race competition. Bill Thomas III, son of the original builder of the Cheetah, will host the gathering and will be joined by a number of other historic Cheetah personalities. 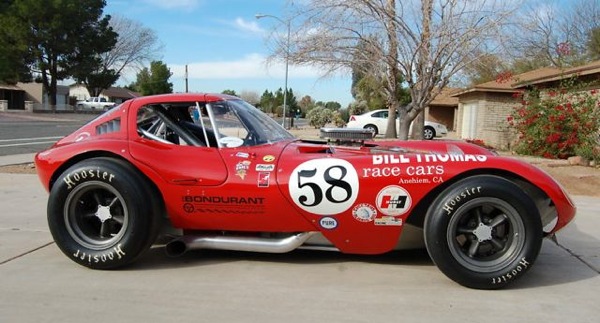 The Cheetah is the creation of California car builder, Bill Thomas II, and was introduced to sports cars racing in 1964. It has a rich history with Elkhart Lake as the Cro-Sal Special Cheetah, named for mechanic Gene Crowe and the original driver, Ralph Salyer, who won the June Sprints at Road America in 1964. The distinctive shape and its high power-to-weight ratio made this unique car very competitive during the 1964 and 1965 race seasons. There were less than 25 original Cheetahs built and only a few of those still exist today. Sam Goings and Jay Stephenson are two original Cheetah owners that have already planned to display their historic racers at this event. Cheetah fans are encouraged to check out the Cheetah Reunion website at www.cheetahreunion.com where registration info is also available.

Bill Thomas III, the son of the original designer and builder of the famous Cheetah, has asked Ruth Engineering to attend with some of its Cheetah Evolutions. Ruth took the original, overall basic shape and modified it to incorporate today’s automotive features for performance and comfort. These updated versions of the Cheetah utilize current technology and components to build modern day varieties of the famous racer for both street and racing use. All the tooling for the Evolution, from chassis to fiberglass molds to DOT windshield, is designed and built completely in-house at Ruth Engineering.