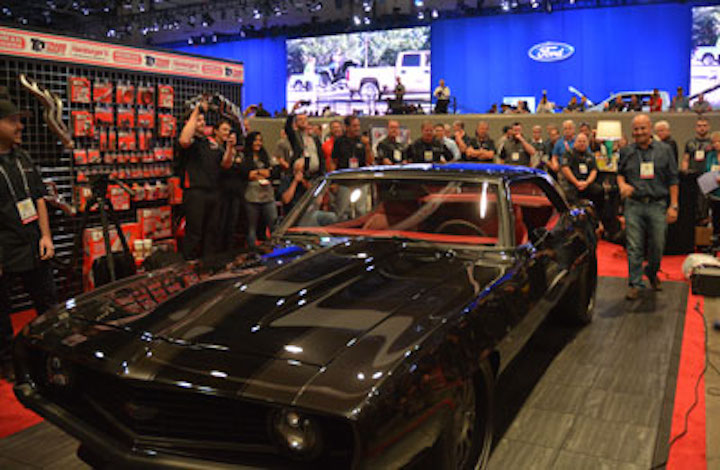 The Chevrolet COPO Camaro Concept was unveiled in the Hedman Performance Group’s display on the opening day of the 2016 SEMA Show. The track-ready concept version of the COPO Camaro features a supercharged 350 engine, custom Weld racing wheels and “anodized” Hyper Blue Metallic paint. The show car will go on the block at the Barrett-Jackson Auction in Scottsdale, Arizona, next January, with proceeds benefiting for the United Way.

Chevy brought back the COPO in 2012, producing just 69 of them and offering them to potential buyers through a random selection process. The automaker will take the same approach for the 69 COPO Camaro’s it plans to release in 2017. As with the original COPO and the 2012 edition, the new cars are designed specifically for the NHRA Stock Eliminator class. Each car will be outfitted with a racing chassis and suspension, including a solid rear axle that replaces the production car’s independent rear suspension.

In production, winners of the COPO lottery will be able to choose from three engines, including the supercharged 350, a naturally aspirated 427, and an LT-based direct-injected 376. The hand-built cars will also feature lightweight manual four-wheel disc brakes, a manual steering rack, a fuel cell with a high-pressure pump, and a unique racing harness. Those picked for a COPO will be notified during the first quarter of 2017.