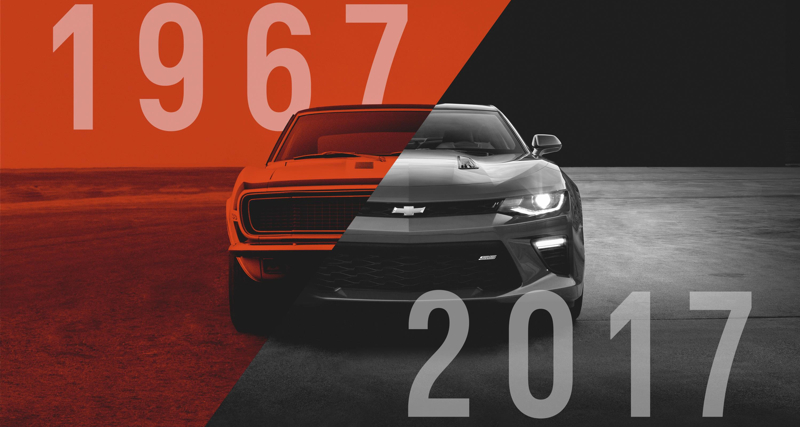 Fifty years after the Camaro name was publically revealed, Chevrolet has announced plans to commemorate Camaro’s 50th anniversary this summer during the Woodward Dream Cruise presented by Chevrolet.

Chevrolet’s Woodward Dream Cruise display will include rare and milestone examples from the car’s six generations, including the all-new 2017 Camaro ZL1 and 1LE models.

“Over the past half-century, the Camaro has fostered enthusiasm, camaraderie and memories like few other vehicles,” said Steve Majoros, marketing director of Chevrolet Cars and Crossovers. “It’s a passion Chevrolet takes seriously and the activities this summer are a way of giving back to those who have made the Camaro an icon.”

More details and event updates will be available at www.camarofifty.com.

The Camaro 50th Anniversary Celebration kicks off Aug. 18 at the Lansing Grand River plant, near downtown Lansing, Mich. Chevrolet will host Camaro owners and enthusiasts throughout the day, with a car show, heritage display and discussions with Camaro team members, including Chief Engineer Al Oppenheiser.

There will also be a Camaro-only parking area for up to 500 cars, a tent offering unique Camaro 50th merchandise and on-site food vendors. Tours of the plant begin at 7 a.m. and run through 3:30 p.m., each lasting approximately 45 minutes.

“This is an unprecedented opportunity to get a behind-the-scenes look at building the Camaro from the ground up,” said Todd Christensen, Camaro marketing manager. “Whether you’re a Camaro owner or simply a fan, it’s an event you won’t want to miss.”

Reservations are not required for the tours, but registration is required on site.

Everyone with a Camaro is invited to participate on Friday, Aug. 19. The event starts at 7:30 a.m. at the Joe Louis Arena Riverfront parking lot, at 19 Steve Yzerman Dr., in downtown Detroit. Space for 500 cars is available to consumers on a first come, first served basis. At 9:45 a.m. 50th Anniversary edition Camaros will lead the Camaro Rally participants toward Woodward Avenue, where they can drive the famous cruise route into the afternoon.

The June 28, 1966, announcement of the Camaro’s name was a tongue-in-cheek press conference hosted by Chevrolet general manager Pete Estes, who announced everyone in attendance – including reporters from 14 cities on the line in a first-of-its kind teleconference – were charter members of the Society for the Elimination of Panthers from the Automotive World. He said it was the first and last meeting of the group, before revealing the name Camaro.

The Panther reference had floated in the news for the previous two years, when word got out Chevrolet was working on the Camaro. The project was code-named Panther, but Chevrolet had always intended to give the car a “C” name to follow the convention of its other car models such as Chevelle and Corvette. The “Panther society” press conference playfully put to rest the speculated name for the new car.

The public got its first look at the all-new Camaro in September 1966. In its first model year, the Camaro achieved 220,906 sales.