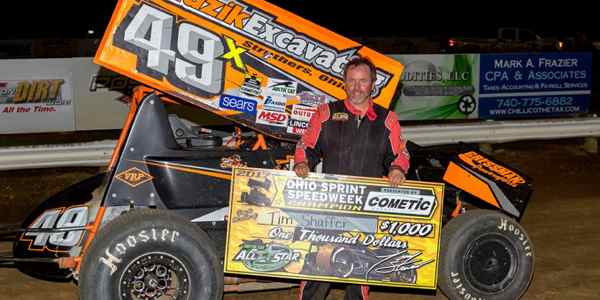 Duncan’s victory caps off an impressive Ohio Sprint Speedweek presented by Cometic Gasket campaign for the second generation Arctic Cat All Star winner, finishing tied for second in the final Ohio Sprint Speedweek championship standings on the strength of one victory and five top-ten finishes, three of which inside the top-five. Despite ending in a tie, Duncan will be declared the official runner-up due to having a victory over Chad Kemenah.

“I just want to thank all of the fans for coming out tonight,” Cole Duncan said. “It was a near-perfect night for racing. The track was in perfect shape. I’m so glad Brad (McCown) opened this place back up and did what he did. It feels so good to be in victory lane during an All Star event at my home track. This is the first Speedweek I’ve ever completed. I’m so proud of everyone.”

Cole Duncan won the battle on Saturday night, but it was the “Steel City Outlaw” Tim Shaffer who won the war, claiming his third Ohio Sprint Speedweek presented by Cometic Gasket point championship worth $1,000. Shaffer’s Speedweek run ended with two victories, the first at Eldora Speedway and the second at Waynesfield Raceway Park, as well as five top-ten finishes, edging out Cole Duncan and Chad Kemenah in the final Ohio Sprint Speedweek title fight by 14 points.

“This was definitely a whole group effort. They did a great job, which made me look even better than I was,” said Tim Shaffer. “We’re running well at a perfect time of the year. I’m having more fun now than I ever have. They gave me a great car here tonight. We have the engines and the parts; everything we need to be better.”

The upcoming Wayne County Speedway appearance will be the third of five for the Arctic Cat All Stars in 2017, most recently during Ohio Sprint Speedway presented by Cometic Gasket on Monday, June 19. Kyle Larson was the Speedweek winner, his first of two Ohio Sprint Speedweek victories with the second coming one night later at Sharon (OH) Speedway.