While car collectors in Oklahoma might have heard about it, not many actually got to see the inside of Oliver Jordan’s Enid, Oklahoma-based salvage yard. That’s because, in a decades-long fight with local officials, he guarded it from sight, ringed it with barbed wire, and hardly let a soul in to see it. This summer, however, the gates to the yard will open up for one last time as the entire collection heads to auction. 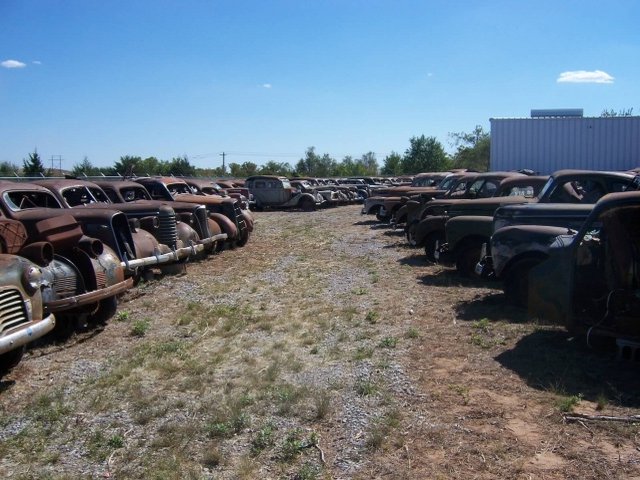 According to auctioneer Yvette VanDerBrink, Jordan’s collection was actually the contents of a salvage yard he opened in 1945 and closed in 1953, being highly selective about who was allowed access to the property from the yard’s closure onward, which was practically nobody. [one_third last=”no”] “Jordan died in August 2003, a year after his 95th birthday, and his widow, Ruby, died last fall. His heirs, who tried once before to sell the contents of the yard in one lot, are now prepared to sell off the collection a piece at a time in a one-day sale.” [/one_third] The full inventory of vehicles is still being compiled, but now numbers around 250 lots, the great majority of them from the prewar years. Perhaps the most unusual offering will be a 1939 Lincoln seven-passenger sedan with all-aluminum bodywork. Also going on the block is Jordan’s personal driver, a supercharged 1937 Cord sedan, plus a seldom-seen 1917 Maxwell. Among the other lots are a 1937 Ford stock car, a 1936 Ford truck allegedly equipped for hauling moonshine, a 1935 Cadillac with Fleetwood coachwork, a 1932 Federal truck, a 1924 Rollin and a selection of tractors, including a 1941 Minneapolis-Moline.

Enid is in Garfield County off the Cimarron Turnpike and U.S. 412, in northern Oklahoma, about halfway between the Arkansas line and the start of the panhandle. Tulsa is 115 miles to the east. For more information, visit VanDerBrinkAuctions.com.