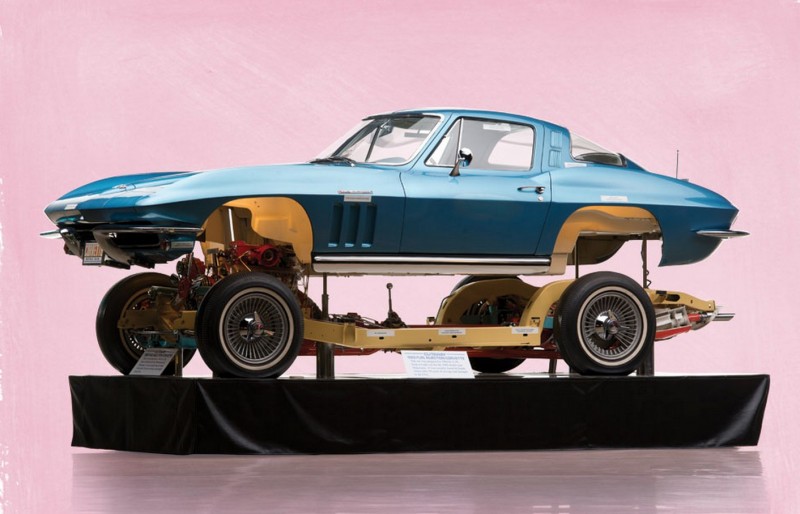 Flash back to 1964, when the above car was a cutting edge Corvette Stingray concept produced by the General Motors engineering team.

The concept was built for the 1965 Motorama show, where it was proudly displayed, before seemingly disappearing for good. However, instead of ending up junked as most of the world thought, the 1964 Stingray concept ended up sitting unperturbed for thirty years in a garage in South Africa. The exact journey the car took to arrive there remains a mystery.

Upon returning to the United States after its rediscovery, the car was restored to its original factory condition and  placed in the collection of famed automotive collector Al Wiseman.

The car was originally built as a fully functioning road-going vehicle. However, General Motors added the elevating arms to lift the body off of the frame, in order to showcase its internals.  As an exploratory concept built on a modified Corvette chassis, the car employs a fuel injected 327 cubic inch V8 mated to a four speed transmission and disc brakes on all four wheels.

As advanced as its mechanics were for its time, the car also employed quirky yet refined interior styling. From the teak wood steering wheel that accentuates the white interior, to the Rayon cord tires, the car exudes a design ethos totally unique to its time.

Now, fifty years after its heyday, the concept is going up for auction by RM Auctions on May 2, 2015. It is expected to command a price of between $1.0 and $1.4 million.

For more details about the car and its history, visit the official auction listing.