Elvis Presley’s 1973 Stutz Blackhawk III, one of his most famous vehicles and the last car he ever drove through the gates of Graceland, will be the centerpiece display in the Nationwide Insurance Classic Car Showcase Pavilion at the upcoming Charlotte Motor Speedway AutoFair hosted by OldRide.com, April 3-6.

Elvis famously bought dozens of cars for himself and friends during his career, but by all accounts, Elvis’ favorite car and the last automobile he drove in public was his 1973 Stutz Blackhawk III. Because the ’73 Blackhawk enjoyed special status among Elvis fans, as well as being so beloved by the King of Rock ‘n’ Roll himself, officials from Elvis Presley Enterprises recently decided to have the car undergo a special preservation process.

“Elvis Presley’s love of unique and fast cars is legendary, something he shared with millions of other Americans,” said Jack Soden, CEO of Elvis Presley Enterprises. “Graceland in Memphis is honored to work with the team at Charlotte Motor Speedway on the preservation of Elvis’ 1973 Stutz Blackhawk III, one of over 30 vehicles in the Graceland Archives. We look forward to having this historic vehicle on display at the speedway’s AutoFair, and then bringing it back to Graceland, where visitors can see it on permanent display in the Elvis Presley Automobile Museum.”

Soden and his team at Elvis Presley Enterprises entrusted Pontiac collector and restorer Walt Hollifield to return the car to the condition it was in when Elvis last drove the Stutz.

“We did not ‘restore’ the car,” said Hollifield. “That would suggest we stripped off the car’s history with Elvis and made it like it just came from the factory. No, what we did was take it back to exactly how it was when Elvis drove it. We replaced the dry-rotted Firestone tires with a fresh set from that period. We buffed out every inch of the paint. We replaced a few mechanical parts that had decayed from sitting, like sparkplug wires and the muffler. Rather than take the engine apart to inspect it, we looked inside with a camera scope. The doors were sagging, so we fixed the hinges. That’s how you do a ‘preservation.’ We preserved Elvis’ time with the car.”

In 1970, the first Blackhawk under the Stutz Motor Car of America banner (a black 1971 model) was air-freighted to the United States to be shown to potential rich clients. Elvis saw it and paid $26,500 for it in October of the same year. Elvis loved his first Blackhawk so much that he purchased three more by 1974 – another black ’71, a white ’72, and the black ’73.

Elvis purchased the ’73 Blackhawk III on September 6, 1974, through a General Motors lease agreement after putting down a $20,000 deposit. It had Pontiac’s 230-horsepower V8, a red leather interior,and an 18-karat gold trim package. The singer made it known that only he would be driving this one, perhaps a caution he developed after the first ’71 was severely damaged in an accident. According to Elvis lore, the King often invited members of his entourage to ride with him in other cars, but in the Blackhawk III he was just as likely to be by himself. Over the next three years, Elvis put 8,450 miles on the ’73. 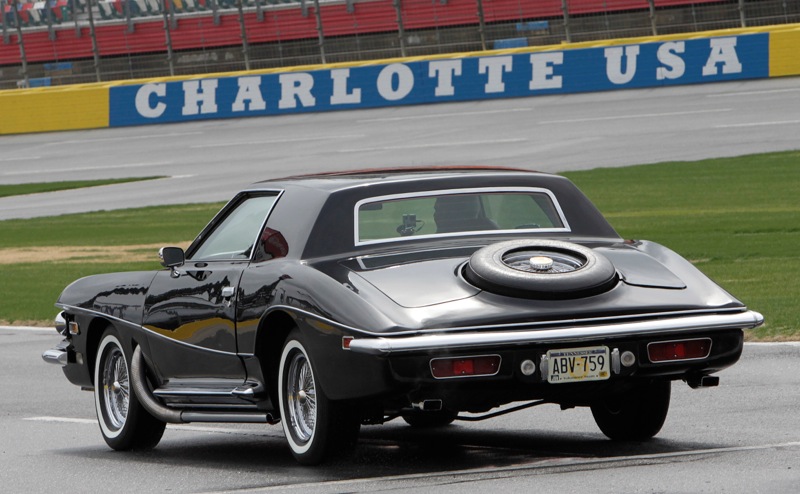 Shortly after midnight on August 16, 1977, he drove it through the gates of Graceland. As was typical any time Elvis wasn’t touring or in Las Vegas, the Graceland gates were thick with loyal fans, and one managed to photograph him as he enjoyed one final drive with his favorite Stutz and passed away later that day.

“There is such a history behind this car and we are grateful that Elvis Presley Enterprises gave us the prestigious honor of displaying it at AutoFair for the first time in public since its preservation,” said Marcus Smith, president and general manager of Charlotte Motor Speedway. “Elvis’ passion for cars is something that speaks to auto enthusiasts around the globe and we know that they are going to enjoy seeing his most prized vehicle.”

The AutoFair features more than 50 car club displays and more than 10,000 vendor spaces offering an array of automotive parts and memorabilia. More than 1,500 collectible vehicles of all makes and models will be available for sale in the car corral that rings the 1.5-mile superspeedway. In addition, up to 200 cars will be auctioned by Dealer Auctions Inc.

Hours for the April 3-6 AutoFair hosted by OldRide.com are 8 a.m. to 6 p.m., Thursday through Saturday, and 8 a.m. to 4 p.m., Sunday. Ticket prices are $10 per day for adults, and children 13 and under are admitted free when accompanied by an adult. For more information on the four-day event, contact the speedway events department at (704) 455-3205 or visit www.charlottemotorspeedway.com.