With tears in her eyes, Danica Patrick emotionally confirmed to media last Friday she would be stepping away from full-time racing competition following the Ford EcoBoost 400 at Homestead-Miami Speedway.

“I’m grateful for all the opportunities,” Patrick said, after getting emotional during the press conference. 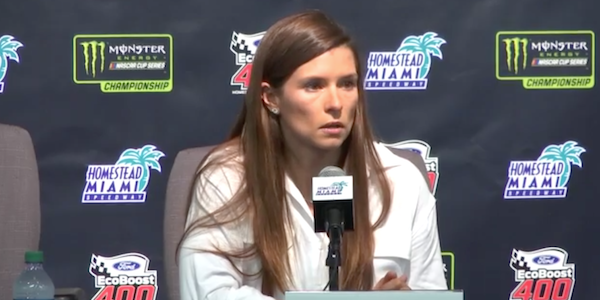 The 35-year-old Patrick declared her intentions to transition after a historical six-year full-time career in NASCAR preceded by a headline-making seven-year full-time stint racing in the IndyCar series.

Before officially retiring, Patrick will race in the 2018 Daytona 500 and Indianapolis 500 — two races innately and overwhelmingly crucial to her career path. Although she doesn’t have the deals completely finalized for the two fast farewells she is dubbing the “Danica Double,” Patrick said she hopes to announce something in the coming weeks. She is confident of putting together a deal or deals to give her racing contributions the proper exclamation point.

The 2013 Daytona 500 pole winner and record-setting Indianapolis 500 competitor is the first woman to compete full-time in NASCAR’s highest level.

Interestingly, she has the same number of laps led (64) and top-10 finishes (seven) in both her XFINITY career (61 starts) and her Cup career (189 starts).

In addition to her NASCAR accomplishments Patrick is the only woman to win an IndyCar race (2008 in Japan) and boasts the top finish ever for a woman in the Indy 500 (third place, 2009). She had top-10 finishes in six of her seven Indy 500 starts.

She’s currently ranked 27th in the points standings with one top 10 this year (10th at Dover).

“It’s not like this is a conclusion I just arrived at,” Patrick said. “I started thinking about all the situations that could come my way in January.”

Patrick said she was open to doing some TV work, but that there was nothing imminent or specific to that yet. Beyond the two races closing out her career, she will continue to attend Monster Energy Series races in support of her longtime boyfriend, Roush Fenway Racing driver Ricky Stenhouse Jr.

Stewart-Haas announced last week that Aric Almirola will replace Patrick in the team’s No. 10 Ford.