The most decorated Olympian in British history will be making his entrance into motor racing this year. 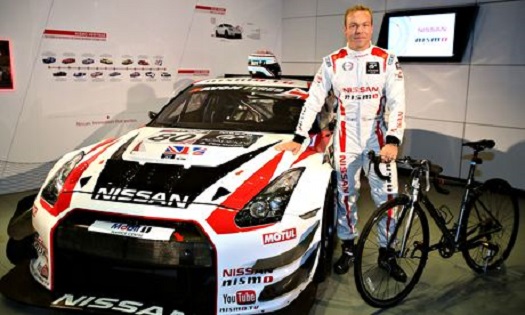 Six time Olympic cycling gold medalist, Sir Chris Hoy, officially retired form cycling this past year. However, he’s made clear his intention to enter motor racing, stating that it’s been one of his life-long dreams. As one of the biggest celebrities in British sports, Hoy has served as a global ambassador for Nissan, and their factory racing team has agreed to give him a spot in one of the their cars in the 2014 British GT Championship. Hoy expressed his gratefulness to Nissan for allowing him the opportunity that so many seek each year, as he stated,

“There are guys all over the world who are fighting to get into GT Academy [for]this opportunity, so I don’t want to waste it”

As one of Nissan’s two drivers in the series, Hoy will race a GT-R NISMO GT3, alongside his team mate, Alex Buncombe. Hoy hopes to succeed in the series and capitalize on potential success to eventually achieve his dream of racing in The 24 Hours of LeMans, remarking,

“It might sound ridiculous right now, but my ambition in motor sport is to compete at Le Mans in the 24-hour race. Who knows if that’s even remotely possible, but that’s my dream. I’m in the right place to do it.”